Our grandparents had a formal parlor in their Orlando home. It was the former Dolan Hotel, so they certainly had enough room.

The parlor had huge, overstuffed, oversized furniture in a deeply piled, but simple, burgundy velvet. It was dark and quiet in there (the windows were never opened and the shades were always pulled) and on hot summer days it was always the coolest room in the house. It was a great place to sneak away to. My sister's old school books were in the closet, so I'd sit and read.

Some of the cousins found it spooky. I found it mysterious spooky and loved it. Others sensed a presence that they didn't like. 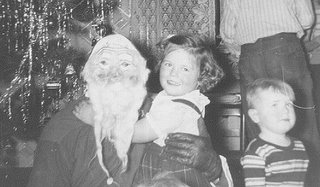 As far as I know the parlor was only used officially for two things. One was Christmas Eve. The tree was magically already decorated when the door was opened on Chrismas Eve for us kids to rush in. Above is my cousin Joe Burgett and me with the world's scariest Santa. I never found out who was behind the other-worldly mask. It scared the Dickens (holiday reference intended) out of me the first time I saw it. Apparently I got over the initial shock.

It was also used for Aunt Virginia's funeral in the 1950s. Her open casket was in the parlor, just as we do in a funeral home today and people came to pay their respects. The day she was buried the lid was closed with a prayer and her body was taken to the Methodist Church where it was lovingly carried to the front. The lid was opened again and we said our last goodbye. After the service the coffin was driven up the steep hill to Orlando Cemetery, where she rests with her parents and their parents, and their parents.

Fifteen years later Grandpa was buried from a funeral home in Weston and buried in Orland Cemetery.