David Parmer shared this story in 2006:
William O. Skinner was was born in 1849 to Alexander & Phoebe (Conrad) Skinner1. He was, to the best of our research to date, the only

one of their 14 children to leave central West Virgina. It was shortly after the Civil War that he joined his aunt and uncle, Matthias and Elizabeth (Conrad) Nail, in the migration to California. He lived in ElDorado, California (see map at left) for 20-some years. He married a California girl, Belle Nichols around 1880. They had three daughters and one son, Bertha Barto, Velma Etzenhouser, Arden O. Skinner and Ruth Price.


A blacksmith by trade, he was ordained a priest in the Reorganized Church of Jesus Christ of Latter Day Saints2 in 1887 and ten years later he relocated to Independence, Missouri where the denomination is headquartered. Shortly after that he began making annual trips back to Orlando, where he began a congregation known as "Mission Number 1930." About 1930 the Orlando congregation had a church building near the mouth of Posey Run. The tiny congregation lasted into the early 1960s.

William O. Skinner died in Independence, Missouri in 1923 and was buried in the Mound
Grove Cemetery in Independence.
. . . . .
The following comes from Barbara Diane (Etzenhouser) Edwards:
William Otto Skinner (my maternal grandfather) married Belle Dynan Nichols in Sacramento City in 1880. She was only 16, having been born on August 13, 1863 in Amador, California (in the California gold country). She had been orphaned at about age 11 and along with several of her siblings had been placed in the Christian Women's Orphan Asylum in Sacramento. This orphanage is now called Sacramento Childrens Home. The home still has a card on the Dynan children, giving their names, ages at admission, ages at discharge and to whom discharged.
Left: wedding picture of William and Belle (Dynan Nichols) Skinner 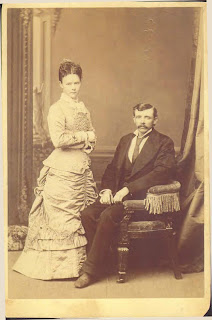 A few years later, she was released to the care of and adoption by a Mrs. Nichols. Family lore is that she had to go to bars to buy buckets of beer for Mrs. Nichols. (A younger brother, Ben, was adopted by a family named Fertig.) I heard somewhere that she married William Skinner because he was religious and she thought he would be good to her. He was a blacksmith. Their first two children, Bertha and Arden, were born in Grizzly Flats, California. Bertha Mabel Skinner was born on November 25, 1882 and died in Independence, Missouri in December 1941. Arden O. Skinner was born on March 11, 1884 and died on March 17th, 1982 in Lombard, Illinois, a suburb of Chicago. Ruth Emma Skinner was born on May 9, 1888 in Roseville, California and died on May 6, 1972 in Independence, Missouri. The youngest child, Velma
Alverta Skinner, was born on March 6, 1899 in Independence, Missouri and died December 21, 1978 in West Chester, Pennsylvania.

My mother, Velma Skinner, married my father, Leonard Raymond Etzenhouser, in about 1926 or 1927. They had both grown up in Independence where William Skinner was a blacksmith. They were both raised in the Reorganized Latter Day Church. Mother worked as a legal secretary in Kansas City while Dad was attending Kansas City Dental College. I believe that William Skinner died July 31, 1923 in Independence. He had left Belle four houses so she was able to live comfortably. By the time she died in about 1941, she had had to sell all of her property. Through the years, members of the younger generation would borrow money from her. My Dad borrowed money from her in order to set up a dental practice in Smithville, now part of Kansas City. Missouri. However, the depression hit, and he was fortunate to be accepted into the United States Public Health Service in which he remained until his retirement. He was transferred frequently and we lived in all parts of the country.
. . . . .
additional information from David Parmer in June, 2012:

In the late 1960’s or early 1970’s, I visited Margaret (Henline) Nixon who lived in Weston. Mrs. Nixon, who died in January 1981, was the daughter of Beham Henline and Samantha (Skinner) Conrad, the latter of whom was the daughter of Alexander Skinner and Phoebe (Conrad) Skinner of Orlando.

Mrs. Nixon graciously allowed me to borrow the tin types for copying. About a dozen copies of each of the tin types were made, and then distributed by me to various descendants of Alexander and Phoebe Skinner. These photographs have been copied and re-copied many times over the years by the original recipients of the first copies and are now very familiar to Skinner genealogists.

The third tin type of Matthias Nail was an interesting image. I inquired of Mrs. Nixon about the relationship of Matthias Nail to the Skinner family. Mrs. Nixon advised me that Mr. Nail’s wife was the sister of Phoebe (Conrad) Skinner. She believed that the Nail family had lived in the Randolph County neighborhood and that shortly before the Civil War, Mr. Nail had contracted “gold fever” and set his sights on going to California in order to find the “cure.” The entire Nail family planned to make this trek across the wild West to California and reinforcements were needed because of the dangers which lay to the west. Mrs. Nixon advised me that according to family lore, Mr. Nail solicited volunteers from the family of his brother-in-law, Alexander Skinner, to join in the expedition. William Skinner, the youngest son of Alexander and Phoebe (Conrad) Skinner, and only around twelve years of age or so, also was struck by the “gold fever wanderlust” and begged his parents to go to the West with his aunt and uncle to California. Permission was granted and William Skinner joined the Nail wagon train for the journey.

Mrs. Nixon also recalled that George Nail, a son of Matthias Nail, drowned in the Missouri River during the adventure.

As is well-known to Skinner family genealogists, the Nail Expedition was successful in reaching California. Whether a “cure” for the “gold fever” was found is unknown. The subsequent history of William Skinner is also well-known and needs no repeating in this comment.

On the back-side Matthias Nail tin type, the name of the photographer was stamped. The information given was “William Shew’s Photographic Est., San Francisco, California # 33925.” The address of the photographic studio was given as 115 Kearney Street.

Notes:
1. More about William's parents: Alexander Skinner's will & photo can be found in the April 19, '06 entry and the March 23, '06 entry about Phoebe (Conrad) Skinner contains her photo.
2. a denomination which is a cousin to the Mormans, the LDS. More information on the Reorganized Church of Jesus Christ of Latter Day Saints, now know as The Community of Christ, can be found at http://cofchrist.org/history/intro.asp