In the 1950s I'd sit, mesmerized, counting coal cars as the trains laboriously wound their way along the track crisscrossed by the Oil Creek Road. I always lost count somewhere over 100 coal cars. More impressive, sometimes these trains with way, way more cars than I could count had two locomotives in the front, two or three spread along the length and at the back was another locomotive, as well as a caboose.

To the left, taken in the 1960s, a train passes the warehouse in Orlando headed east. To the right is a photo taken in 1985 by Randy Strogen near the Posey Cemetery. It was borrowed from the website Northern West Virginia Railroads. Note that there are two locomotives pulling from the front. 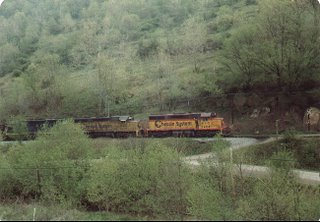 Along with showing great photos like the one above, WV Rail Fans at NWVR write this about the stretch of railroad Orlando folks know so well:
(the track) "enters the 1887.5 ft Jacksonville Tunnel. The tunnel allows the railroad to exit the West Fork Valley and enter another watershed, the Clover Fork Valley, resulting in an uphill climb for eastbound loaded trains 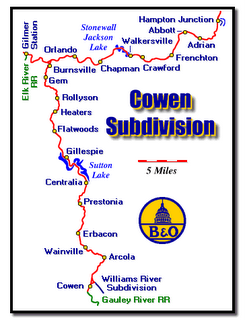 out of Burnsville requiring the use of helpers. The G&B drops downgrade from the tunnel along the northern side of the Clover Fork valley passing through the small town of Chapman before entering the Oil Creek valley near Orlando, WV."

Thanks to Brad Moyers for assisting us in obtaining permission from WVRailFans to use of Randy Strogan's photo, the chart and text.
.