Virginia McCoy Was a School Teacher at Clover Fork

Peggy Morris, daughter of Glenn and Virginia (McCoy) Skinner, tells how her mom came to Orlando where she met & married a grandson of Jackson McWhorter and Patience (DuVall) Skinner 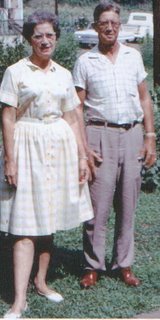 Virginia McCoy was born in Gem, a small town on the way to Sutton. Her dad, Nolan McCoy, was killed in a train track accident when she was three. Her mother, Audrey McAvoy, died in the great flu epidemic in 1918.

Virginia was raised by her stepfather who sent her to college. At the age of 15 she graduated from Normal School (the equivalent of a two year college today) and started teaching. Virginia first went to Richwood where she lived with her older sister and brother-in-law who were also teachers.

"I don't know why or how she got to Clover Fork to teach, but that is how she met Dad." Clover Fork was a one room school house.

Glenn Skinner was probably working in his barber shop near his Uncle Dick's restaurant in downtown Orlando at that time. The shop was long gone by the 1950s and we kids played in the then decrepit wood building that had housed it.

Glenn and Virginia had one of the loveliest farms in the area, about a mile up Grass Run, off Three Lick, where raised a family of seven kids: Jean was the oldest, followed by Marjorie, Peggy, Eleanor (Bump), Nolan (Dick), Linda (Spark) and Robert Glenn, (Bob). When the youngest was maybe ten, they moved to Fort Pierce, Florida 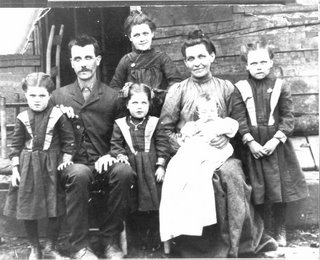 where Aunt Virginia taught for another 20+ years, now at the school where her oldest boy was the principal.

Many thanks to Peggy (Skinner) Morris for the information on her remarkable mother.

Photo above is of Glenn & Virginia (McCoy) Skinner, taken by their nephew Bill Stutler in the 1960s.
Photo of Gid & Sarah(Bennett) Skinner shows baby Edmund Glenn as an infant on his mother's lap, wearing- a christening gown?