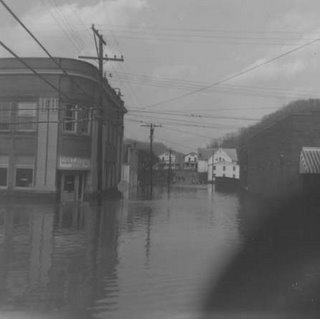 The photos were taken during Burnsville's 1967 flood.

Oil Creek meets the Little Kanawha River at Burnsville. Oil Creek floods can be impressive, but nothing like the floods on the river it flows into. The Burnsville dam built by the Army Corps of Engineers has been mentioned in regard to the creation of Burnsville Lake, but its importance in flood control has been overlooked.

Following is a story of just one of the many floods that were a part of life in Burnsville and other towns on the rivers that drain West Virginia before dams. Many thanks to Pat Ridpath who published this in here e-column, Pat's Chat 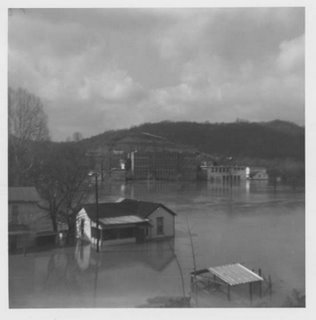 Telegram on August 7, 1943 , told this graphic tale, and a copy of it was sent to me by Laura Linger Yeager of Barboursville, WV. Thank you, Laura. "

“A story of desperate, middle-of-the-night rescue work and of terrible devastation to crops and property was brought to Clarksburg last night by one of the first persons to leave Burnsville in the heart of the flood-stricken Central West Virginia region.

“The messenger is Claude R. Linger, a traveling salesman who himself helped to rescue the 85-year-old mayor of Burnsville , M. W. ‘Uncle Matt’ Hefner, and several other persons from the inundated Hefner addition to Burnsville .

“Working in pitch-dark, for all utilities had already gone out, he 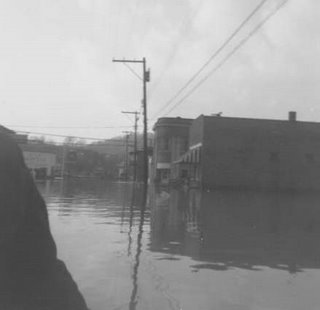 drove to safety the wife and children of Carlin Sizemore, who works in Charleston .

“Then he went back to bring out a second carload. This time, he had just gotten Mayor Hefner and two small daughters of O. K. McNemar, clerk of the ration board, into his car, when the rapidly rising waters came to the car doors and the machine started to float.

“Shouting for help, Linger said he struggled to get the car doors open in order to get his three passengers out again and to safety.

“C. L. Stilwell and Marvin Mealey, he went on, came to their rescue and with Stilwell carrying Mayor Hefner and the other men carrying the children, they started up the street toward higher ground.

“The entire procession, Linger said, almost drowned. Mayor Hefner had on rubber boots which filled with water and almost carried him and Stilwell under. Both Stilwell and Mealey went in over their heads before they staggered to safety with their human burdens.

“Linger, who says he can’t swim a bit, went in up to his chin and was practically exhausted when a Mr. Hamilton, a Hope Natural Gas Company employee, came up to relieve him of the child he was carrying.

“With the water now rising 12 feet an hour or faster, it was impossible to get back across the bridge to the higher section of town, and Linger didn’t get home until about noon Thursday when he crossed back by boat. He had left his truck sitting in front of his house and both it and his car, in Hefner addition, were badly damaged by being under water for 24 hours.

“Yesterday Linger was able to get a truck to bring his car to Clarksburg for overhauling.

“The last person saved in the 1:30 a.m. rescue operations, Linger declared, was Mrs. Raymond Taylor, whose husband is in the Army. The water was rising in her house when she was taken out by a group of women who sawed off some garage doors and tore a clothes line off a porch to make a raft. But just as they completed the raft, one of the only three boats available in the town that night came by and took them to safety.

“When Linger returned home by boat about noon Thursday, he was riding over telephone wires, which gives some idea of the extent to which the waters had risen.

“One of the hardiest of the flood victims was a dog owned by Victor Hyre, which swam around in the high waters all night and until the next afternoon, now and again temporarily perching on some obstacle, but soon being carried out into the water again.

“A Mrs. Smith and her son and daughter-in-law, Mr. and Mrs. Grover Bragg, were sleeping through the flood until someone woke them by throwing rocks onto their house. When they opened the front door to find out what was going on, the water burst in and filled the house up to the second floor landing. And there they stayed, stranded on the second floor, until the water went down 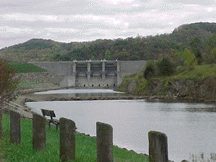 “Linger said the crop damage in Braxton County, where an unusually large amount of garden stuff was being grown this season, was huge. And at Burnsville , the loss of furniture and canned goods, the damage to buildings and cars and store stocks, was equally great.

“Many Burnsville people, Linger explained, are working in war plants and had their furniture, much of it new, stored at home.

“At Coger, Linger said, the water was high over a swinging footbridge between the post office and the railroad station. Cogar Maulsby, postmaster and storekeeper at Coger, lost two-thirds of his stock. Among the few things he saved was a new shipment of shoes, which was still unpacked. Linger estimated his loss at several thousands of dollars.

“The Burnsville postmaster, Virgil Knight, who lives four to six miles from town, saw the flood coming and hurried to town to remove all the first-class mail. The water was up to his chest as he made the last trip from the post office.

“The water almost reached the top of Burnsville ’s theater, but Linger said the theater-owner has promised a show tonight.”

"Thankfully, the new dams have made such terrible floods a thing of the past, but disasters can happen anywhere. Such tragedies seem to create heroes who forget self and go above and beyond the call of duty to help others."
Three photos of Burnsville flooded in 1967 thanks to David Parmer.
Lower left photo: Burnsville dam, constructed in the 1970s/'80s.
See also
Nov 2, '06 Telling Tales
Oct 10, '06 Orlando of the Lakes
Comment 1
In 1943 my family lived in a house in Burnsville owned by my grandfather, E. J. Cox, a Burnsville area teacher. This house was the last house on the street closest to and running parallel with Salt Lick Creek. The house was a wooden frame house, raised more than six feet off the ground. Our next door neighbors were Bill and Lilly Wine, and heading down the street lived C. S. Rucks, the Sumpter, Sizemore, John Smith, Matt Hefner and the McNemar families. I believe there were a few more houses before one would reach the Salt Lick Creek bridge. Our house had a front porch with wooden steps going down to street level. At the time of the 1943 flood my father, G. D. Parmer, was working in a war plant in Baltimore. I was going on two years old, my sister Kathryn was eight, my brother Doyle was six and my brother Ronnie was four. The flood came early in the morning and rescue boats were evacuating families. When a boat came to our house the flood waters were already onto the porch and the front steps had been washed away. My brother Doyle who was six at the time and crippled stepped to where the front porch steps had been before they were washed away and he fell into the flood waters. He was quickly fished from the water and into the boat and the rest of the family was then put in the boat and taken to safety.
- David Parmer
Comment 2
Burnsville has had flooding higher than the '43 flood. What made this one dramatic was the unusually rapid rise of the water in the night due to the heavy rains and the fact that the ground and rivers were already saturated from a heavy rain the week before. I have a couple of additional weblinks on my website. The heaviest rain was up on the Salt Lick River and, of course, the Burnsville valley has Oil Creek, Little Kanawha and Salt Lick merging into the Little Kanawha.
- Charles McNemar
Comment 3
David Hyre, now of Brockton, MA, sends a wonderful tale of Claude Linger in the Burnsville Flood. It is featured in the Nov 2, '06 entry, Telling Tales. He also sends this valuable nugget:
"... By the way, Victor Hyre's dog survived after swimming all night. His name was "Scruff', I used to play with that dog."