The B & O Railroad was a major employer in Orlando in the first part of the 20th century.

David Parmer shares the following information about working for the B & O.
There were at least two divisions of maintenance workers. Railroad trackmen worked along sections of railroad tracks and those sections were not very long, maybe only a few miles long. A section worker would be required to walk the entire section daily, noting any problems with the track, as well as with any overhanging cliffs which may fall on the tracks. Usually there were about 8 men in a section and the routine upkeep of their section of track was their responsibility. The crew of trackmen who worked the tracks along Oil Creek was Section 24, Elk Line of Charleston Divison. They are pictured in the photo to the right: front row Heater Henline, Ernie Fox, back row Joe Skinner, Red Beckner, Pete Blake, Newt Blake and Newt Henline . Joe Skinner was the section leader. 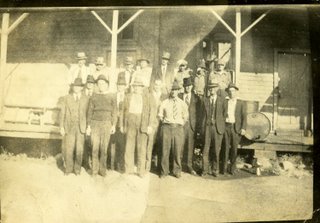 Maintenance Of Way crews were much larger in size than a section of trackmen. They took care of larger problems than the routine maintenance of the track. This might include clearing wrecks, removing overhanging cliffs, or major renovation of tracks. A maintenance of way crew was a floating crew which covered a much larger area that a mere section of track. The photo above is of Maintenance of Way workers in the 1920s or 30s was taken in front of the Orlando warehouse. We can't identify anyone in this photo. (See the small photo to the right of the warehouse in the 1960s.)

Perhaps this is a Maintenance of Way crew that came in to clean up a train accident like the one in the entry for
October 6, '06, Orlando Train Wreck in the 1920s

Let me know of missing names.

Thanks to David Parmer for the two vintage photos. Apologies that I can't clean them up any better.