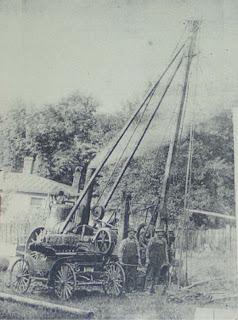 In this photo a 1917 Sears and Roebuck auto sits in front of a steam powered gas well drilling rig. Bailey Knight and Bub Heater pose with their machinery.

David Parmer's research tells us that Bub Heater and Bailey Knight were from the Posey Run area, probably to the north toward Indian Fork. Bailey Knight bought the 1917 Sears & Roebuck auto from its first owner, Charley Killingsworth of Burnsville. Legend has it that this was the first auto in the area.

David Parmer also tells us that the steam operated drilling rig belonged to Bub Heater. The Heater family was involved in the oil an 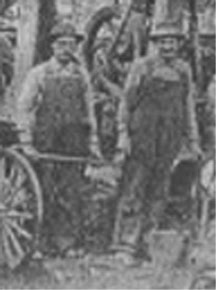 d gas business from its beginnings in central West Virginia.

To the right is a very fuzzy closeup of Bub Heater and Bailey Knight.