“The Orlando” -A Railroad Buffet-Parlor Car 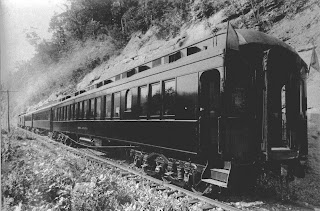 In the early years of the operation of the Coal and Coke Railroad, criticism arose about food service which was available in Orlando for passengers who were changing trains at the Orlando depot. Alan Clarke, in his book, “West Virginia’s Coal and Coke Railway,” reported that in 1910, a columnist from a Charleston newspaper, the Kanawha Citizen, complained about the food service in Orlando and gave it’s a “thumbs down” review. Apparently, the Orlando restaurateurs’ culinary skills did not suit the palates of Charleston newspaper men. Clarke identified the Orlando restaurant in question as a lunch counter operated by the man who also operated a hotel in Orlando. At that time, the Dolan Hotel was yet not in operation, so by elimination, the only other hotel in operation in Orlando was the Rush Hotel, operated by Michael Rush. It is unknown to this writer if Michael Rush operated a lunch counter in Orlando. Therefore, the identity of the lunch counter which raised the hackles of the city newspaperman is not positively known.

Clarke has suggested in his book that Henry Gassaway Davis, the President of the Coal and Coke Railroad, in response to the food critic’s complaint, decided to cater to his passengers’ culinary comforts and ordered that a food car be put into service on the Charleston-Orlando run. Although this directive did not come about until 1914, a full four years after the initial complaint by the Charleston food critic, Clarke believes that Davis responded to the complaint, albeit a bit tardy.

In 1914, the Coal and Coke Railroad purchased a used buffet chair car originally called the “Larchmont” from the Pullman Company, a builder of railroad cars. Clarke reported that the rail car was originally built in 1890 by the Wagner Sleeping Car Company. The buffet car was re-furbished at the Gassaway shops of the Coal and Coke Railroad and was put into service in June 1914. The new luxury dining car was re-named the “ Orlando,” in honor of the town of Orlando. Clarke reported that the “ Orlando”, as it was designated, was 78 feet long overall and with an inside area of 70 and one-half feet. The car was lined in oak and mahogany “with revolving parlor chairs covered in green plush and fitted with folding tables.” The car included a smoking area and ladies restroom, according to Clarke.

This is The Orlando's floorplan.

The marketing department of the Coal and Coke Railroad advertised its “ Orlando ” buffet car with great pride and touted that it “furnishe[d] special accommodations for which there seemed to be quite a demand.” An advertising brochure of the railroad announced that service included “meals a la carte” with “excellent service” in a “beautifully equipped” dining car at “popular rates.” Presumably, the original critic of the standard Orlando restaurant fare, was on the “maiden voyage” of the “ Orlando” luxury buffet car and that his “tony tastes” were ‘en avoir plus qu’assez.’

It was heretofore a little known fact that the town of Orlando was thus honored with a railroad buffet car named in its honor and perhaps thanks to an early Orlando lunch counter operator with nothing on the menu that appealed to a particular reporter's tastes. 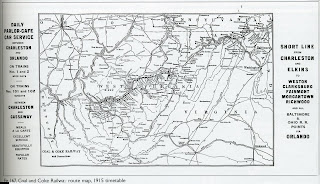 below is detail from the map above 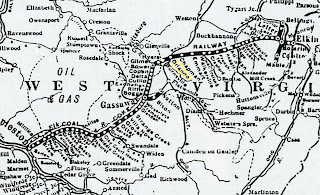