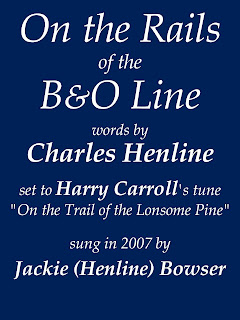 An addition to the Jun '07 entry, The Buzzardtown Tongue Twisters
by David Parmer 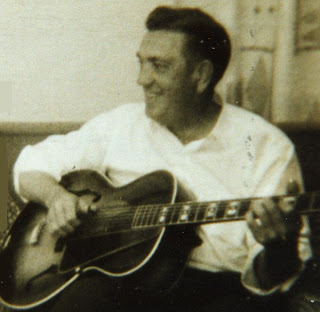 Click to the left to hear Jackie (Henline) Bowser sing her dad's, Charlie Henline's, parody taken from real life on Oil Creek. Thanks to Jackie's cousin Joyce Brannon, the daughter of Charlie's talented sister Olive Mae (Henline) Brannon, for her encouragement & assistance in getting this recording.

On the Rails of the B & O Line1
The Story Behind the Song
When the railroad was put through the hardy little farming communities along Oil Creek/Clover Fork they were changed forever. Charlie Henline’s words, which he set to the tune of “On the Trail of the Lonesome Pine,"1 reflect something of life in this changed and changing community.
.
To the right is Charles Heline, below left is Charles and his wife with their daughter Jackie, who is the singer in this recording of her dad's song.
. 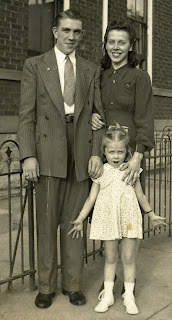 By the early part of the 20th century, many of the men had taken jobs with the railroad and other industries in the area but small farms still dotted the Oil Creek Valley. Families still grew feed for their animals, some grains and table vegetables. Farm animals, including cows, horses, mules, sheep, chickens, ducks, turkeys provided transportation or food for the dinner tables and could supplement their incomes.

The Amos Henline family lived about midway between Orlando and the mouth of Posey Run from the early 1910’s until around 1935. Amos worked at the Gowing Veneer Mill in Burnsville and later for the gas pumping station in Burnsville. Like many employees in those early days, Amos walked or rode a horse the three miles or so to work from his Oil Creek home. At home were his wife, the former Charlotte Blake, their oldest child, Olive Mae, and Olive's younger brothers, Jim, Charlie, “Jake” and “Pat.”

The family had the usual small farm, keeping chickens, ducks, and a milk cow to help feed this growing family. This small farm on which the Amos Henline family lived abutted upon the busy right of way of the Baltimore and Ohio railroad.

When farm animals escaped their fenced lots or fields and wandered onto the busy railroad tracks the animals invariably came out second best in collisions. Uncle Zeke 3 in the Buzzardtown News often reported on the deaths of farm animals which resulted from an untimely rendezvous with the cow-catcher of a fast moving freight or coal train. In his January 18, 1923 column Uncle Zeke mentioned that the southbound Passenger Train 35 killed a “bunch” of sheep belonging to J. F. Posey at the Orlando junction. Later the same year in October, Doc Henline’s favorite fox hound fell victim to a B & O train. Undoubtedly, many a lowly cat or chicken also fell under the wheels of a locomotive without even the barest mention by Uncle Zeke. In July 1924, a westbound double-header3 freight killed George Riffle’s only cow and Passenger Train 65 in June 1926 snuffed out the life of Pat Brennan’s cow.

Of course farm animals were not the only victims of rail traffic through Orlando. Many, many people died or were maimed by the trains.
~ In November 1936, Beulah McPherson, an Orlando area teacher, forgot to observe the cardinal rule to stop, look, and listen at railroad crossings, and failed the test with a B & O passenger train. To the right is young Miss McPherson.
~ Phebe (Posey) Riffle lost her arm but not her life one day in the 1940s. See the footnote about Phebe and her husband George "Short" Riffle in the Aug '07 entry About 'Coon Hunting.
Other stories of flesh vs. the iron horse can be found at
~ Feb '07 Death Rides the Rails Wayne Skinner & Roscoe McNemar
~ Dec '06 The Ballad of Eugene Butcher Gene Butcher
~ Nov '06 Another Death On The Rails Homer L. Skinner
~ Nov '06 Railroad Tragedies Warren McCauley

So, Amos Henline’s milk cow decided to take a stroll on the B & O Railroad line. Unfortunately the cow didn't know that a B & O freight train always has the right of way and the poor cow was milked and filleted at the same time. Charles Henline set the tale to music, and now, its history.
.
The Musical Henline/Blake Family
Amos Henline's and Charlotte Blake's families were both noted musical families. Many musicians emerged from both branches of this family. Amos was a budding musician himself until a planer in the veneer mill at Burnsville removed his musical aspirations along with two fingers. His cousin, Red Henline, was champion fiddler. On Charlotte’s side, the members of the Blake family from Clover Fork were the premier pickers of the banjo, the strummers of the guitar and the coaxers of the fiddle strings from an early date. Charles, his brother James and his sister Olive formed a popular musical group known as the The Buzzardtown Tongue Twisters which began performing as early as 1932 when they entertained at the Charlie Knight Store in Orlando. At this time, Charles Henline was but 13 years of age, James was 14 and Olive was 18.

Footnotes
1. Charles Henline composed words to the tune by Harry Carroll, On the Trail of the Lonesome Pine. Original words to the song were written by Ballard McDonald.
2. Uncle Zeke was the pen name of Patrick N. Blake, born on Clover Fork, lived on Posey Run. Many of his articles and poems are published in this 'blog.
3. A "double header" was a coal train so heavily loaded that it required two engines to move it up the grade from Burnsville to the tunnel at Chapman.
.
.
.
.
Below are cousins Jackie (Henline) Bowser (two photos on the left) and Joyce Brannon (two photos on the right), the daughters of two of the Buzzardtown Tonguetwisters, Charles Henline and Olive (Henline) Brannon. 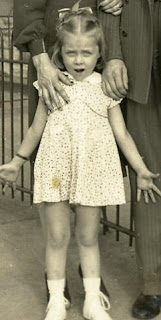 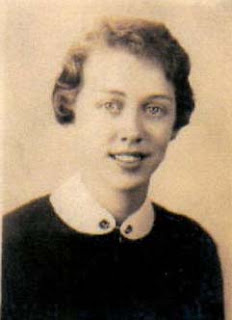