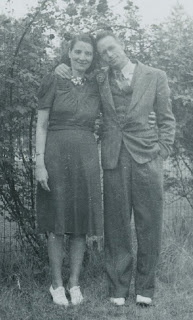 by Edward and Mary Blake’s daughter:
Marjorie Mae Blake Broyles
My father is Edward Rucks Blake, son of Lee Washington Blake and Civillia Susan Riffle. My grandfather, Lee Washington Blake instilled in his son who was deaf, the love of education and an exceptional work ethic. Edward became deaf because of an accident when he was eighteen months old. He was on a second story porch and fell to the ground. His parents did not know that he had lost his hearing until they noticed that he had quit talking. Lee and Civillia Blake took him to the Johns Hopkins Medical Center in Baltimore, Maryland for an evaluation. This is when they became aware of his disability. Lee and Civillia Blake enrolled him at the Romney State School for the Deaf when he was seven years old.

My father graduated with two diplomas from the West Virginia State School for the Deaf at Romney, WV. One diploma was in Industrial Arts for Linotype Operator and the other was an Academic diploma, which he received on June 5, 1931. Many people who did not have a disability could not accomplish this achievement in that time of history. He regularly visited the Carnegie Free Library at Beaver Falls, PA to do research. My love of reading resulted from the many evenings spent in the library.
.
To the right is Ed Blake with his new bride, the former Mary Elizabeth "Betty" McDonald
Below left is the Romney State School for the Deaf as it looked when Edward attended. 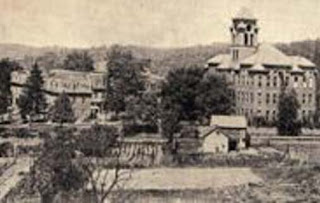 My sister, Shirley Blake, notes that our father was an advocate before people realized the difference they could make in people's lives. Many of his evenings also was spent at the kitchen table writing to different "honorable judges" describing conditions that he felt were unwarranted in our society. His penmanship, grammar, and spelling were exceptional. His job required these skills and he always corrected his children in their letters if a word was misspelled. My brother, William Lee "Bill" Blake, remembers our father receiving a reply to a letter that he wrote to Congressman Clark. Our father, Edward, corrected the letter and sent it back to the Congressman.

My father, Edward, worked as a Linotype Operator for various newspapers in Ohio, Tennessee, Georgia, Pennsylvania and West Virginia 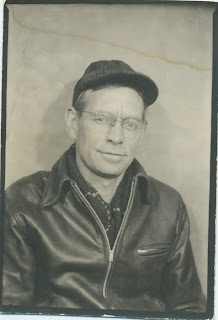 as a young man riding a Henderson motorcycle. My brother, Bill Blake also remembers our father having a Harley Indian motorcycle. When asked why he traveled on his motorcycle and worked at many newspapers, he told us that he wanted to find a woman, who was also deaf to marry, so he traveled around the immediate states meeting with deaf people. He finished his career as a Linotype Operator for the News-Tribune, a daily newspaper in Beaver Falls, PA, retiring at the age of 65. After retirement, he set 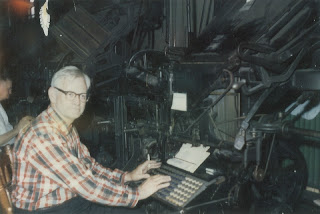 up his own publishing business in the basement of his home. He traveled frequently to Virginia to visit his two daughters.
Above left is Ed in the leather jacket he wore riding his motorcycle, looking for his bride.
To the right is Edward Rucks Blake at his lineotype machine.

While at a deaf association picnic at Idora Park in Youngstown, Ohio, my father, Edward Rucks Blake, finally met the woman he wanted to marry. He married my mother, Mary Elizabeth McDonald, from Beaver Falls, PA. She is the daughter of Sherman Harrison McDonald and Mamiee Elizabeth Freed. My mother attended the Western Pennsylvania School for the Deaf in Pittsburgh, PA. As an older teen-ager, her mother would take her to the train station in Beaver Falls to catch the train back to school in Pittsburgh after spending weekends and vacations at her home in Big Beaver Boro, Beaver County, PA.

While in deaf school, Mary Elizabeth, Betty, was taught Home Economic skills. She was an excellent cook and housekeeper. She made dresses for me when I was in elementary school. She was very family oriented and always had supper on the table when we came in from school. My 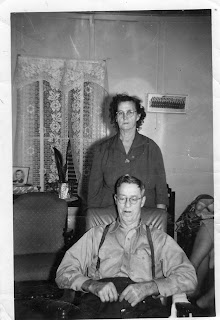 mother and father were self-sufficient. They did not receive monetary help from family members. We children were raised to also be self-sufficient, to understand the value of an education, and we 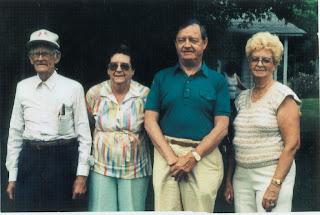 three children have an exceptional work ethic.
.
To the left is Ed with siblings Pearl, Delis "Fisher" and Mae. Siblings not in this photo are Gilbert, Vayden and Phyllis.
To the right is a photo of their parents, Lee and Civilla (Riffle) Blake
Footnotes
1. According to Nick Sherman, "the linotype machine, in its time, vastly improved the rate at which type could be set. A gem of the industrial revolution, Thomas Edison called it the 'eighth wonder of the world'”.