by David Parmer
Pine Run is about four miles from Orlando by the way Uncle Zeke’s buzzards fly, but a lot farther by the twisty roads that follow the creeks and runs. It is part of the Orlando Post Service's Route 1.
.
The one room school house that served the community from 1909 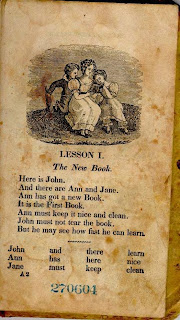 until 1956 has been moved and restored at the Cedar Run State Park. The one room schools that dotted the hills were backbones of their communities. Clifford Wine, Sharon (Rogers) Jeffries and Mary (Robey) Butler from Pine Run remember their school with great fondness. Here are some of their memories.
Above left is Mary Roby, one of Pine Run's students who shares her memories below.
To the right is the first lesson in the McGuffey Reader. Below is a page of Dick and Jane from the Elson Reader series. During its half century history, these series were, in turn, the familiar foundation of learning at Pine Run School. 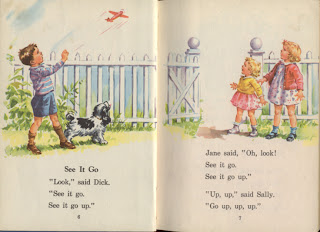 The Building
The Pine Run School was a simple frame structure which served as a one room school for the Pine Run neighborhood. The building was about 24 x 28 in size and constructed of lap siding and a slate roof. A thick slate blackboard crossed the back wall of the school. The walls, ceiling and floor were of fitted tongue and grove lumber, the walls and ceiling of poplar and the floor of oak. A pot-bellied stove was situated in the middle of the large room, with a flue extending upward through the ceiling to the outside. A small cloak room was situated in the right rear corner of the building. A school bell was outside mounted on the front gable. A unique aspect of the school was the hand pump water well which was located on the front porch of the school.
Former student Clifford Wine, who grew up on Indian Fork and attended Pine Run School for nine terms, which included an extra year after the eighth grade, recalls that the floors of the school would receive an annual treatment of linseed oil as a preservative. Clifford also reminisced that the school board would pay a student a sum in the range of two dollars per month to go to the building early during the winter a build a fire. A good floor sweeping also was part of the duties of the fire-builder. Clifford was eager to for this opportunity because money was scarce during the Depression. 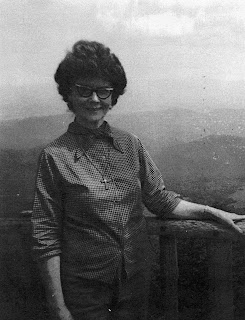 Pretty Miss McCudden Was Very Strict
The last teacher of the Pine Run School prior to its closure in 1956 was Miss Helena McCudden. Helena was the youngest of two daughters of Thomas James and Bridget (Craft) McCudden. Helena ’s older sister Catherine McCudden Hoover also was a longtime Lewis County teacher in one room schools. Sharon (Rogers) Jeffries who attended the Pine Run School recalls that Miss McCudden was her teacher from the first grade through the fifth grade when the school closed. Sharon remembers her teacher as a strict but a very good teacher. Miss McCudden’s long auburn hair is a special memory of Sharon’s. Miss McCudden taught all of her career in one room schools of Lewis County until the closure of the Pine Run School after which she spent the last years of her teaching career at three locations: the two room Horner School, the Ben’s Run School which was 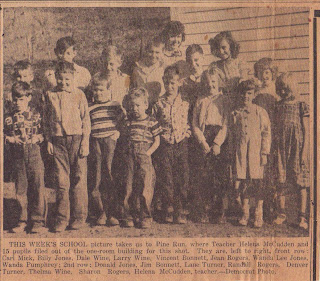 Ronald Farnsworth taught at Pine Run from 1942 until 1949. A native of Troy in Gilmer County, Mr. Farnsworth was the great-grandson of Governor Daniel Farnsworth, the second governor of West Virginia. Ronald favored the challenges of teaching in one room schools and enjoyed the eagerness of rural children to learn the 3 R’s. He also taught school at the one room Upper Glady School near 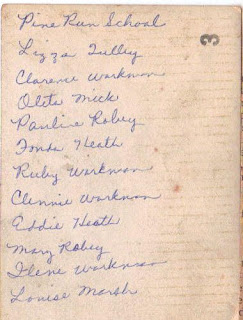 Crawford for a number of terms and several other one room schools in Lewis County. Ronald was the longest serving teacher at the Pine Run School, teaching seven terms. He was a long time resident of the Shadyside area in Weston. According to one of his former students, Clifford Wine, he had a hobby of cutting clippings from newspapers. He died in 1987.
A Fun Weekend With Miss Swecker
Zoe Swecker was originally from the Canoe Run area of Roanoke. She taught at the Pine Run School from 1940 until 1942. She, as did many of the other teachers who taught at the school, boarded at the Charles and Mae Heath home near Ben’s Run during the school week and went home on weekends. Clifford Wine recalls the pleasant experience when he and several of his classmates walked with Miss Swecker from the Pine Run School to her home on Canoe Run near Roanoke to spend the weekend. Miss Swecker was a teacher her entire lifetime and after “cutting her teeth” at the one room school at Pine Run she furthered her education at the University of Chicago where she was granted a Ph.D. in History. She later taught history at the University of North Carolina and Clarion State College. She died in 1978.
Mr. Mick Had a Gold Tooth
Oscar Mick was an educator for many years throughout Braxton, Gilmer and Lewis Counties. The son of W. C. "Dorus" and Martha (Skinner) Mick, Oscar was born at Sand Fork and grew up in the Rocky Fork area. Oscar graduated from Glenville State College, then received a 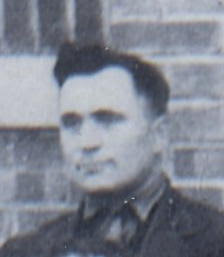 Masters Degree from West Virginia University. Oscar taught at Pine Run during the teeth of the Depression. Clifford Wine remembers that Mr. Mick was the first person he ever saw with a gold tooth. Clifford also recalls that Mr. Mick drove an old car and was not the greatest driver in the world. On one occasion, Mr. Mick caused a little excitement in the tranquil neighborhood of Pine Run when he upset his car in the middle of the road above the Pine Run School. Oscar’s wife, Myra, was a long time teacher of biology at Sand Fork High School and was the critic teacher of Clifford Wine when he did his student teaching at Sand Fork High School. Oscar was a grandson of Draper and Mary (Heater) Skinner and great grandson of Alexander and Phebe (Conrad) Skinner. He died in 1966 at age 77.
Miss Mayme Mullady
Mayme Mullady was the daughter of Edward and Catherine “Kate” (Bohan) Mullady. She taught at the Pine Run School from 1940 to 1942. Miss Mullady never married. She died in 1979 and is buried at St. Bernard’s Cemetery at Loveberry.
Mrs. Plunkett Came From Loveberry
Mary (Byrne) Plunkett taught at the Pine Run School from 1935 to 1937. Her parents, Joseph and Mary (Doonan) Byrne, operated a general store in the Loveberry section years ago. Mary’s brother Tom was also a teacher in one room schools in Lewis County for many years. Mary was widowed and later remarried Hayward Ellyson of Gilmer County.
A Taffly Pull at Miss Tulley’s
Gertrude Elizabeth "Lizzie" Tulley was the daughter of Martin “Sandy” and Elizabeth Green Tulley of Tulley Ridge. Her homeplace is now the location of the northbound rest area of Interstate 79 just north of Burnsville. Lizzie taught at Pine Run School from 1928-1931. Mary (Robey) Butler of near Burnsville recalls that Lizzie Tulley was her first grade teacher when she attended the Pine Run School. Clifford Wine of Indian Fork, also one of Miss Tulley’s 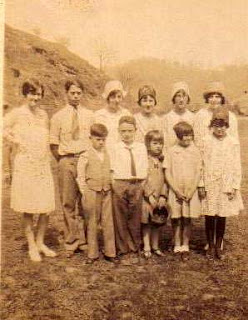 students, remembers that his teacher invited several students to accompany her home to Tulley Ridge one evening to have a taffy pull. Clifford had never participated in anything like that before and had a great time. Some of his classmates got taffy in their hair but they also had an enjoyable, but sticky, visit. Lizzie married Carl Salzer of Pennsylvania who was in the Orlando area working in the oil and gas business. Lizzie’s brother, Joseph, was a friend and co-worker of Lizzie’s soon-to-be husband. Lizzie left the Orlando area with her husband who followed the oil and gas business throughout the country.
Back row: Gertrude Elizabeth "Lizzie" Tulley, Clarence Workman, Oleta Mick, Pauline Robey, Fonda Heath and Ruby Workman. Front row are Clennie Workman, Eddie Heath, Mary Robey, Ilene Workman, and Louise Marsh.
Mr. Perrine
Albert Perrine, the Pine Run teacher for 1934 and 1935, was a native of Ben’s Run, just above Pine Run. Albert’s parents’ farm on Ben’s Run had an outcropping of coal which was mined by Albert’s father and sold throughout the Indian Fork, Goosepen, and Orlando area. The coal was delivered in an old truck owned by Mr. Perrine. Clifford Wine recalls that he received a well deserved paddling one day from Mr. Perrine when he was a young student. It seems that an older student prompted Clifford to use an off-color word in class which Clifford had never heard before. As is usually the case, the older student got off scot-free.
Miss Snyder Helped Her Brother
Alice Snyder was a young teacher when she taught at Pine Run School in 1937 and 1938. Alice boarded during the week with Charles and Mae Heath and went home to Roanoke on the weekends. Clifford Wine recalls that Miss Snyder was helping to support her brother who was attending medical school at the time. 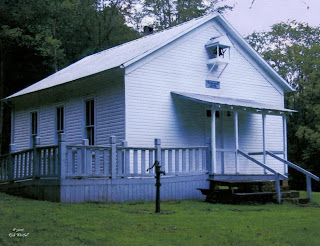 I recall that the Pine Run School took field trips to other one room schools in the area such as the school at Ben’s Run just to visit. We also, during the Christmas season, took trips to the hills surrounding Pine Run to look for a Christmas tree for the school. During that time most all of the hills around Indian Fork were cleared all the way to their tops, so it was not an easy task to find an evergreen tree. The maintenance men for the Lewis County schools would apply a coating of linseed oil to the wooden floors of the school once a year

comment by David Parmer
Zoe Swecker, a former teacher at the Pine Run School, obtained a Ph. D. from the University of Chicago in 1960. Her dissertation, widely quoted in subsequent historical works, was titled "The Early Iberian Accounts of the Far East, 1550-1650." Miss Swecker, originally from Canoe Run, near Roanoke, was a fifty year member of the American Historical Association, and her death in 1978 was noted in the American Historical Review, Volume 83, No. 5 (Dec 1978).


comment by David Parmer
In 1863, the newly formed government of West Virginia passed an act for the establishment of a system of free schools in West Virginia. According to the act, each county was to have a school superintendent and other necessary officers.