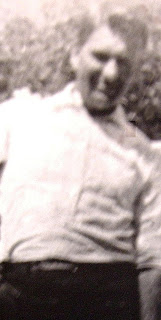 This is the third entry about Frank "Bud" Hamilton of Oil Creek.
A Short Lifetime on Oil Creek is a brief biography of Bud with his family. Fox and Hounds recounts his love of fox hunting as reported by the Bard of Buzzardtown, Newt Blake, aka Uncle Zeke. This entry looks at the role the Philadelphia Company, a major employer in the region, played in the Hamiltons' lives.
by David Parmer

The next year, 1916, Bud and Georgia married. According to a news item in the Braxton Democrat, Bud and another brother-in-law, Homer Skinner (married to Georgia’s older sister Bessie), were building a road at Blackburn (located at the confluence of Rocky Fork and Sand Fork in Gilmer County) for the Philadelphia Company in order to access a drilling site. They were using a Philadelphia Company horse 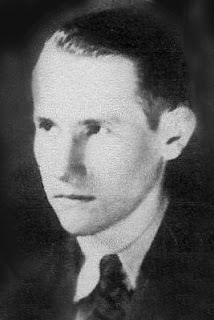 named “Rex,” which had been injured and for which Bud was providing veterinary skills to bring the horse along.
Left, above, Richard Francis "Frank" "Bud" Hamilton.
Right: Stanley Hamilton, son of Bud and Georgia (Riffle) Hamilton.
Left, below: Bill Hamilton, in 1944 when he played basketball for Burnsville High School.
According to Bud’s son, Bill, his father would saddle up and go out early in the morning on his rounds of his “territory” for the Philadelphia Company. This work area was about ten square miles and involved traveling the right of way to check for leaks in the gas transmission line, cutting brush along the right of way, checking the piping and other mechanical devices on the individual wells, and reading gas meters of customers in his 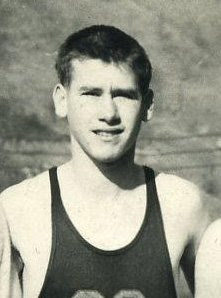 service area. Bud was a long-time and knowledgeable employee for the gas company. Bill remembers that his dad never took his lunch with him on his rounds and that invariably his father was invited to have lunch at the homes of his many friends on his circuit.

Other employees of the Philadelphia Company from the Orlando area were Delbert “D. B.” Posey, Oscar “Dock” Henline, Hob Henline, Amos Henline, and Walter Blake.

. . . . .
Comment by David Parmer:
In the early 1900’s, gas and oil were discovered in central West Virginia. Southern Lewis County, northwestern Braxton County and northern Gilmer County were at the heart of the newly di 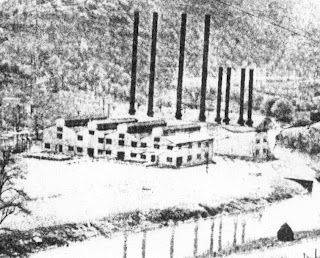 scovered gas and oil fields and the thriving metropolis of Pittsburgh was in dire need of this valuable energy resource to keep its blast furnaces and factories running. The Philadelphia Company with headquarters in Philadelphia was in the energy business. Recognizing the opportunity existing in central West Virginia, it was an early entrant in the exploration for gas and oil in the Orlando area, along with its subsidiaries, the Equitable Gas Company and the Pittsburgh and West Virginia Gas Company. A competitor company, the Hope Gas Company, was also very active in exploration for oil and gas in the Orlando area.

Left: The Burnsville plant of the Philadelphia Company, built in 1916.

After drilling many successful wells in the tri-county area, the Philadelphia Company laid pipelines to move gas from these wells, as well as gas from Kentucky to the Pittsburgh area. The pipeline route chosen for the Philadelphia Company pipeline ran just to the west of the Oil Creek valley. With it came the need for employees to service and maintain the pipeline and the many wells located in the area, and to install and maintain meters for the local customers for gas.