Ethel Daisy Posey, born on Posey Run in 1884, was the daughter of George Jackson and Minerva (Hopkins) Posey and the granddaughter of Oil Creek pioneer son Alfred Posey and his wife Christina Murphy.

When Ethel was ten years old she wrote a letter about the two weeks she spent with her a couple weeks with her grandparents, Andrew J. and Sarah (Dennison) Hopkins in Gilmer County. The letter, which was printed in a church magazine, is in the Apr '07 entry Ethel Posey's Adventure In the comments which follow this entry is a letter she wrote as a young wife and mother.
Right: Ethel (Posey) Bennett
by David Parmer
Ethel Posey Bennett was a gracious, elegant lady, most often seen by this writer during the late 1940’s and early 1950’s in dark silky-looking dresses with “old-lady” lace-up shoes. To the writer’s young eyes, the gray hair, dark pocket book carried over the shoulder, and spectacles, justified the belief that Ethel was a senior citizen, although at the time Ethel was younger than this writer is now. The Order of the Eastern Star and the Rebekahs were popular and well-attended women’s clubs in Burnsville and Ethel was a faithful member of both. Ethel had many friends in Burnsville and she visited the town frequently from her home on Posey Run to see friends and attend club 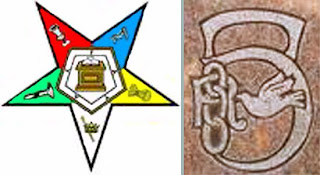 meetings.
.
Left: logos for the Order of the Eastern Star and the Daughters of Rebekah.
.
Ethel, born on Posey Run in 1884, was the daughter of George Jackson Posey and Minerva (Hopkins) Posey. She was a life-long member of the Mt. Zion Methodist Church of Orlando, which her pioneering Methodist father helped to form shortly after the Civil War. Ethel was also a key member in the Posey Family Reunion which brought many descendants of Edward and Catherine Scott Skinner Posey to Orlando from far and wide for an annual gathering.
.
Ethel was married for a short time to Grover Van Horn and they had a son they named George Marion Van Horn. In 1910, at her Posey Run home, Ethel married the Reverend Porter Bennett, a widower, from Tanner, Gilmer County, who was thirteen years her senior. During the course of their marriage Ethel and Porter became the parents of six children: three sons, Porter, Rolfe and Noble; and three daughters, Virginia, Maxine and Sarah.