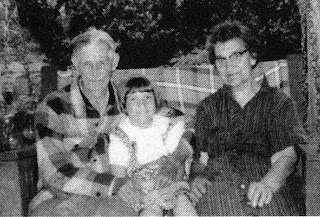 Tricia Lynn Strader with her grandparents Linzy and Mae (Posey) Strader on Road Run in the late 1970s. Tricia told about her Road Run roots in the June '08 entry You Can Go Home Again

by David Parmer
The night creatures hadn’t started their mysterious conversations. It was too early. But it was something she was looking forward to. Her grandfather, Linzy Strader, leaned forward in his easy chair and expertly spit over the porch railing into the front lawn, as if he was aiming at something. Wip 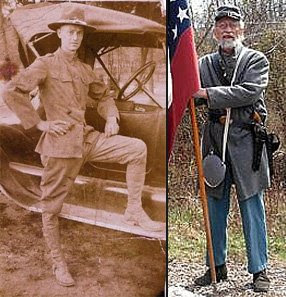 ing the corner of his mouth, he smiled that soft smile at his granddaughter, Tricia Lynn, and resumed his contented enjoyment of his Navy snuff in the late July afternoon. To a young girl from the city visiting her grandparents, these were magical times in the rural wonderland of Road Run. The day had been full, searching for crawdads in the run which crawled slowly past the house, gathering eggs from the hen house, smelling the freshly cut grass and chasing butterflies. Soon the crickets 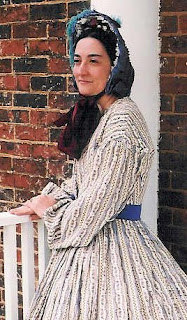 would be screeching their night songs and the frogs on Oil Creek at the railroad cut would be croaking their sonorous calls. This was truly the land of make-believe and it was a hard place to leave.
Tricia
It wasn’t far from the make-believe yesteryear land of Road Run of a young Tricia Lynn Strader to the make-believe land of an adult Trica Strader portraying Belle Boyd, Confederate spy, at the Belle Boyd House in Martinsburg, or performing before the rolling cameras on the movie set of Gods and Generals on the Antietam battlefield.
Right: Tricia at the Hammond mansion.
Above left: Timewarp-a photo of Tricia's grandfather Linzy (also pictured at the top of the page with his wife and granddaughter in the 1970s) in his WWI uniform ca. 1918, and a photo of his son Frank in a Civil War uniform, ca. 1990.
Left: Tony Morgan, Frank Strader and friend on the set of Stealing Lincoln's Body. Note the set lights behind.)
Tricia Lynn Strader was born in 1970, the daughter of Franklin D. and Vivian (Kuhl) Strader. Her father, a native of Orlando, attended school at Orlando and high school at Burnsville, graduating with the class of 1952. Her mother, a native of Burnsville, attended grade school at Burnsville, and high school in Delaware.

To Tricia Strader, the time of the Civil War was long ago, another time. Little did she know that her interest and the interest in Civil War re-enactments of her parents, Frank and Vivian (Kuhl) Strader, would transport her back in time and acquaint her with a certain southern belle, a spy for the soldiers in gray, and provide a 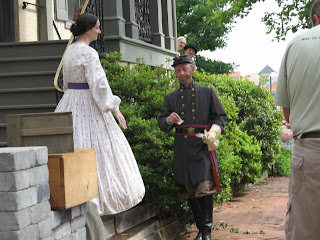 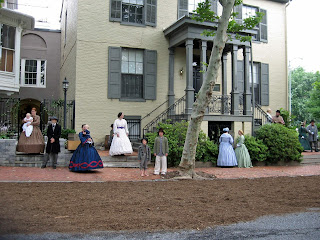 Belle Boyd, Confederate Spy
The Civil War started with a bang in the spring of 1861. The waters of Bull Run ran red with the blood of boys from Virginia, as well as boys from New York and Pennsylvania.

The decisive, war-ending victory both sides had hoped for did not happen. The leaders of both the Union and the Confederacy recognized that total victory would not come easily, or quickly. In the day before telephones and other sophisticated means of communication the importance of intelligence to provide information about what the other side was up to was vital to the prospects of victory.

In 1861 Belle Boyd was a young 18 year old vivacious southern belle, a strong believer in the cause of the South. When the war started, Belle was living in the Shenandoah Valley town of Front Royal where her father operated a hotel. This area of the Old Dominion was hotly contested by both southern and northern armies and occupation of Front Royal by one army or the other seemed to change on a weekly basis.
A hotel occupied by officers and decision makers was an ideal place to learn of an army’s intentions. Belle, using sharp ears and womanly guile, learned much of the intentions of the Union armies, and carried the intelligence to southern generals, including Stonewall Jackson and the “Grey Ghost,” John Mosby. The four years of Civil War was an exciting and dangerous time for Belle Boyd, and greatly romanticized by Civil War historians. Books have been written about her and movies and plays have made her legendary.


Tricia as Belle Boyd
Tricia Strader attended high school in Delaware and graduated from Goldey-Beacom College in Wilmington, Delaware with a B. S. in Business Administration. After college, Tricia pursued a career in the business field and in journalism. With a strong interest in history and genealogy, Tricia discovered that Belle Boyd had an ancestor with the family name of Spaur and was related on her mother’s side of the family. That knowledge and her hobby of participating in Civil

President of the Confederacy. Tricia has also appeared in historical movies about the Civil War, Gods and Generals and No Retreat 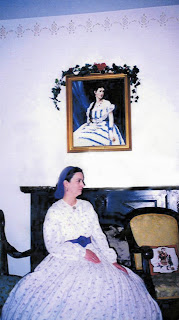 from Destiny, and an unreleased

Life certainly has been interesting for the young girl who made summer treks to the magical place of Road Run to visit her story-telling grandparents while they sat on their front porch on summer evenings, while the butterflies flew, the crawdad flicked its tail and moved from rock to rock and the smell of freshly cut grass was in the air. From chasing butterflies at her grandparents’ home on Road Run to having butterflies before a performance as Belle Boyd, life has been exciting for Tricia Strader.