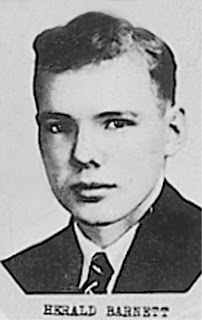 Herald Alva Barnett was the youngest son of Alva and Gay (Marple) Barnett. Born in 1923, he was the younger brother of Denver Barnett.

Herald was a quiet boy, always respectful of his teachers, other adults, and the other students, even though some of his classmates were not so respectful of him. It sometimes is difficult and problematic to be the most intelligent student in class. Teachers are thrilled to have such a student, a bright star, who is eager to learn and ready with the answer to questions posed to the class. But on the playground, he was sometimes derisively greeted by a dullard with the chant "Har, Har, the little bright star." There are always some who resent the student with his hand up with the answer. But mediocrity is the way of the world, and always will be. 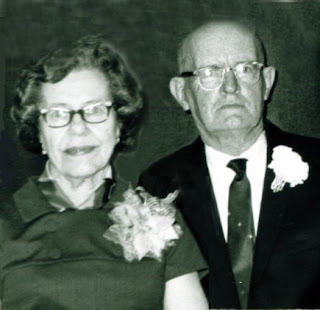 The Student
Herald was graduating as valedictorian from Burnsville High School in May 1940 as German JU-88 bombers were covering English airfields with five hundred pound bombs and the German High Command was planning its blitz of London. America’s entrance into the war was a year and a half away but as each graduate received his or her handshake and diploma they knew the future held great changes in their lives. The parents seated in the high school auditorium watching their sons and daughters graduate remembered the war of the previous generation and the boys who 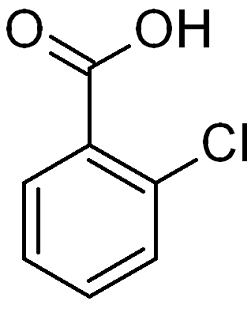 never came home and hoped for something different for their sons.

With the "Pomp and Circumstance" processional still a familiar tune in his mind, Herald enrolled at Salem College in 1940 to major in Chemistry. Embarking in a field of study deemed "critical" to the war effort, Herald was deferred from the war-time draft until he graduated with a Bachelor of Science degree in 1944. After his return from military service during World War II, Harold graduated from West Virginia University in 1950 with a Master of Science degree in Chemistry. His Master’s thesis was titled "The Solubility of Orthochlorobenzoic Acid."

Right: a diagram of a molecule of C7H5CIO2: ortho chloro benzoic acid. It is a white powder.

The Soldier
Waiting for Herald at the end of the Salem College diploma line was Uncle Sam with his congratulations and a draft notice. At this stage of World War II, the critical operations of the Army required expedited training of new inductees and their quick shipment to the European front. The North African and Italian campaigns involving American foot soldiers were underway, and the crucial Normandy landing was yet to come. 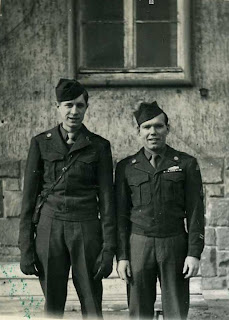 Rank came quickly for Herald. When the Panzers led the German advances in the Battle of the Bulge in December 1944, scattering American front-line troops, Herald was an infantry sergeant. Within four months of the desperate German offensive in the Ardennes, a German surrender brought an end to the hostilities in Europe. As Herald’s infantry unit was being prepared for transfer to participate in the invasion of Japan at the 3rd Replacement Depot in Marburg, Germany, the nuclear bombs "Little Boy" and "Fat Man" brought an atomic end to the war in the Pacific. In a short time thereafter, Herald joined the ranks of demobilized soldiers and returned to the classrooms of beakers and Bunsen burners and a civilian career as a chemist.

Marriage to "Barney"
While attending Salem College, Herald had met Eleanor Louise Whiteman of Clarksburg who was also a student there. After the end of World War II and his return from Europe, Herald 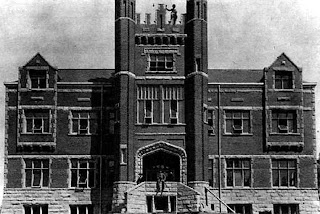 entered the graduate school at West Virginia University and renewed his friendship with Eleanor who was also attending graduate school at the state university and working on a Master’s Degree in Romance Languages (French and Spanish.) On June 1, 1947 in Clarksburg, Herald and Eleanor were married by Reverend Albert E. Johnson. Eleanor never became 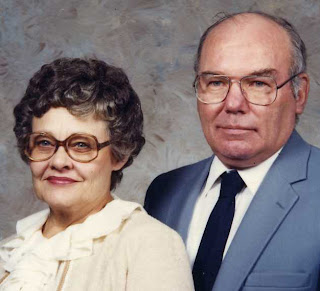 accustomed to her husband’s given name of "Herald;" instead "Barney" became the name of her husband for all of their married life. Eleanor and Barney became the parents of two children, Brenda and Bruce.

U. S. Steel Corporation
During his graduate years at West Virginia University, Herald interned during the summer months at the Research Lab of United States Steel Corporation in Pittsburgh. U. S. Steel, the world’s largest steel manufacturer at the time, was so impressed with his work that he was offered full-time employment, which he accepted. While working full-time at U. S. Steel doing chemical research, Herald attended Carnegie Tech and the University of Pittsburgh and worked on a doctorate in Chemistry. However, the theft of his dissertation research papers from his automobile, the loss of his advisor who left Carnegie Tech for Europe, and the demands of his employment derailed Herald’s plans for completion of his doctorate.

Occupational Risks
Herald enjoyed his career with United States Steel. However, years of working in confined spaces with chemicals which were later determined to be carcinogenic, exacted a toll on Herald’s

health. First it was throat cancer, from which he recovered. However, a later fast-spreading lung cancer proved fatal to Herald and death came in 1999.

Right: the warning label from a bottle of othochlorobenzoic acid