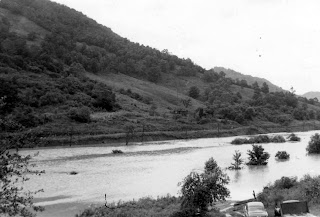 Storms clouds had been building throughout the day. Even though it was daytime, it was dark as evening. Thund

er was rolling with the sound of potato wagons on a hard rock road. Lightning was illuminating the sky and casting eerie shadows in the narrow Dumpling Run valley. Livestock on the several farms located on the run were fidgeting with each roll of thunder or crack of lightning. The rain came slowly at first, cooling the hot baked ground, but soon became steady and heavy. Before long the rain was beating down on the tar paper roofs of the houses on Dumpling Run. Kerosene lamps which had been lit to cope with the dark seemed to struggle and their flickering became pronounced as the heavy rain caused drafts to flow through the cracks in the doors and the gaps in the floorboards. The 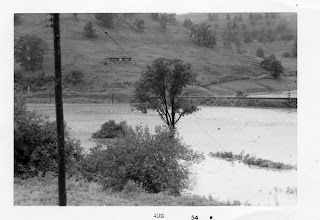 normally placid Dumpling Run began to flow swiftly and water crept up the banks of the confined creek. Ollie Vankirk and her barely school-aged foster daughter Jean sat hunched at their kitchen table. Despite the smell of bread baking in the stove, unease filled the tiny house perched on the bank of the run. Forty-four year old Ollie was worried about their milk cow which was tied up in the barn by the creek. This June 21st of 1937 was dark and it was hard to see the creek although it was easy to notice the roar of the water growing louder and louder. The roar was becoming ominous. Ollie’s husband Homer was not at home. 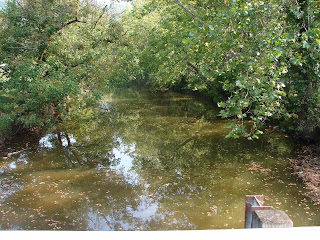 He had left on foot earlier in the day to visit a doctor in Sutton, twenty-four miles away. No one was home to help Ollie in this time of peril.

Left, above: Ollie Vankirk
Right, above: two photos of Oil Creek at the mouth of Dumpling Run during the flood of 154
Left: Oil Creek near Dumpling Run in Summer, 2008, at its usual level.

Ollie and Homer Vankirk
Ollie and her husband were tenant farmers on the Frank Crutchfield farms which adjoined on Dumpling Run. In exchange for keeping the farm clean of brush and tall grass and taking care of the owner’s cattle, Ollie and Homer lived rent-free on the Crutchfield farm. This was a period of hard-times throughout the country and especially in Braxton County. The Vankirks were lucky to have a roof over their heads for there were many homeless people living in lean-tos along railroad tracks. Although the house provided no 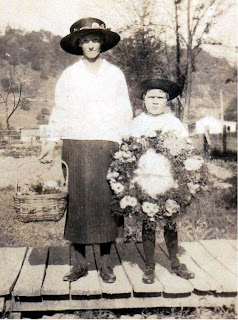 modern amenities, the Vankirk family had a place to sleep and the farm provided the rest of the necessities of life. However, Homer suffered from poor health. Although he was only fifty-one years of age, he was plagued with heart disease which limited his ability to handle the heavy work of a farm. Fortunately for him, Ollie was strong and a good helpmate so they were managing to get by.

Right: Olie and Ressie on Decoration (Memorial) Day
A Crisis in the Barn
Ollie became alarmed as she saw the water rapidly rise into the barn and heard the loud mooing of the cow. The water was rising unbelievably fast as she struggled to open the barn door against the current of water. Struggling through the water-filled barn, she finally reached and untied the terrified cow. It was difficult to turn the cow in the swift water which was already up to its haunches. The water kept rising as if a year’s worth of rain had been dumped all at once in Dumpling Run. After righting the cow, and starting it toward the barn door, Ollie was struggling, but losing, her battle with the deluge of water between her and safety. Who can say what she should have done? Some speculate that if Ollie had held on the cow’s tail, she would have reached safety. Unfortunately, Ollie didn’t, and she lost her battle with the raging water.

Left: click on the newspaper article to read it. 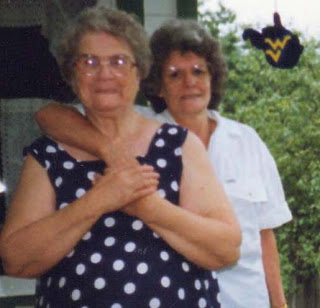 Right Ressie and "Sweetpea" Jean
Aftermath
Unaware of the crisis on Dumpling Run, Homer Vankirk had taken refuge from the driving rain in a barn somewhere between Sutton and Burnsville and spent the night there. Arriving home the next day, he learned that his helpmate had been lost to the water but her body had not yet been found. It would be more than a week before the lifeless body of Ollie Vankirk would be found about a mile below Burnsville near the home of Foss Heater. Had it not happened that her long hair became tangled and ensnared on a tree branch, her body may have met the same fate of other flood victims on the Little Kanawha River who were never found.

The melodious bell of St. Paul’s Methodist Church in Burnsville rang out to announce the funeral of Ollie Vankirk. The church was full of friends, family and curiosity-seekers, who were saddened by the death of their neighbor. She was laid to rest in the Quickle Cemetery above Burnsville. Today, the cemetery is a pleasant place to visit and has a beautiful view of the Burnsville Dam and the impounded waters of the Little Kanawha River.

Less than two years after his wife was laid to rest in a beautiful spot, Homer Vankirk died of heart disease at the home of his foster daughter, Mrs. Ressie Wilson, on Oil Creek. He, too, shares a spot in this picturesque burial ground. Ollie and Homer lie peacefully together and time, in its passage, has softened the horror of the flash flood of Dumpling Run of 1937. 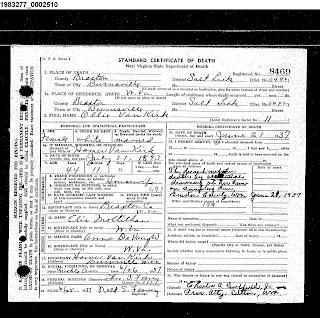