The previous entry was about Bill and Minnie Copeland's life in Orlando. This entry looks at Bill's special talent for telling a tall tale. 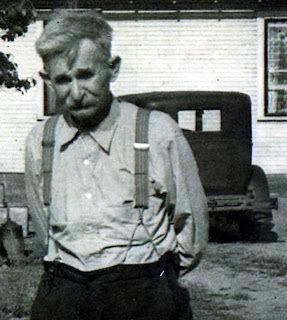 by David Parmer
In the days before radio and television, the art of conversation held sway in many homes in Orlando. Whether it be everyday gossip, stories of the "olden

days," ghost stories, or tall-tale telling, the people of the Oil Creek area relished a modicum of prevarication to go along with the truth of the matter. One need only to read the weekly columns of Uncle Zeke’s Buzzardtown News to understand the role of "truth stretching" in livening up day-to-day life in Orlando. Of course, Uncle Zeke was probably the number one dissimulator in central West Virginia, or at least he was the most well known. However, there was one storyteller in Orlando to whom Uncle Zeke humbly accepted the back seat and that was Bill Copeland, the Prevaricator of Orlando.
Left: P. N. "Uncle Zeke" Blake
Right: Bill Copeland

The Fine Art of Prevarication
During his days in Orlando, Bill was renowned as a story-teller. As mentioned above, the state of conversation in daily life before the days of radio and television is in stark contrast to the mind-numbing modern era where the art of conversation doesn’t exist and the television set is always blaring. During the early 1900’s, country schools such as Burnsville High School fielded literary and debate societies and oratorical and debate contests were common in even smaller communities such as Orlando. Families which had enjoyed practically no formal education encouraged and fostered the art of conversation and communication skills. Uncle Zeke who had formal education of less than three terms wrote a newspaper column read throughout West Virginia and adjoining states, and was a fair hand at turning out poetry and comedic, satiric and thoughtful columns. Families carried on political discussions at the dinner table, under the old Elm tree, or on the porch after dinner. Nighttime conversations often included the telling of ghost stories and tall tales, allowing for developing the art of prevarication.
A Master of Prevarication
One recognized master prevaricator in Orlando during the early 1900’s was Bill Copeland. Perhaps the hour long walks to and from his Burnsville employment provided the impetus to conjure up tall tales and made the daily walks pass quickly. Whatever the motivation, Bill was given his due by none other than Uncle Zeke, also a renowned teller of tall tales.
~ In his January 22, 1918 column, Uncle Zeke recounted that "Bill Copeland says one morning as he was going out to work for the Hope Gas Company, he found the sun froze fast to a big chunk of ice and he blew his breath on it and thawed it loose and forthwith it hastened on its journey."
~ Recognizing Bill’s penchant for the tall tale, in his August 27th, 1918 column, Uncle Zeke admiringly wrote that "Some people can tell a lie but won’t, but Bill Copeland says he can tell the truth but won’t."
~ A few months later, Uncle Zeke, still in awe of his cohort in tall tale telling, stated in his November 12th column, that "Bill Copeland of Orlando has dissolved partnership with the truth."
~ Uncle Zeke also admired Bill’s horticultural skills. In a December 10th, 1918 column, he paid homage to Bill’s magnificent garden, "Bill Copeland says out of his crop of pumpkins this year he had a few as big as Charleston." However, Uncle Zeke wasn’t shy about reporting Bill’s horticultural setbacks.
~ In his October 7th, 1919 column, Bill advised his friend Uncle Zeke that "his pumpkin crop was almost a failure this year. He says his smallest one only weighed one hundred and eighty pounds."
~ In the early days of radio (which was initially called "wireless telegraphy"), Uncle Zeke quoted Bill who was informing the public that he had the "contract of cleaning off the right of way for the new wireless telegraph, from here to there." 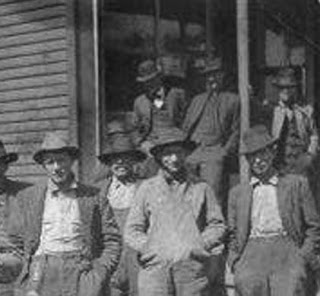 ~ Later, as a newfangled aeroplane happened to fly over Orlando, Bill Copeland, according to Uncle Zeke on August 3, 1922, advised the boys on the porch at Charlie Knight’s store that the plane was "looking out a route for a wireless telegraph line."
Right: Some of the fellows on the porch at Charlie Knight's store.
~ When it came to military secrets, Bill however had a weakness with divulging new military technology. In his post World War I column of January 28, 1919 column, Uncle Zeke chastised Bill for revealing that "Uncle Sam has invented a gun so big that it would take all of Union Hill (a community near Crawford) tied on a ramrod to make it a set of wipers."
~ Uncle Zeke did admit that Bill, on occasion could be truthful. On January 21, 1919, Zeke reported that "Bill Copeland told the truth the other day, and he hasn’t felt well ever since."
~ Uncle Zeke was a great reader of Bill’s facial expressions and said, on February 19th, 1921, that "Of course, I won’t mention any name, but it is real funny to see Bill Copeland when he hears the truth told." 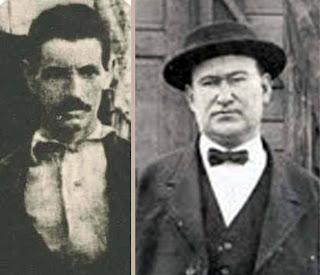 ~ Uncle Zeke was critical of Bill’s total lack of control when it came to letting the ‘cat out of the bag’ about upcoming court actions. Zeke reported, on April 19, 1921, that "Bill Copeland says that Dr. Peck has threatened to indict Henry Cole at the next term of court for being so slow." Zeke observed with a straight face that his advice that men who live in glass houses, such as Doc Peck, "shouldn’t throw stones."
Right: Henry Cole and Dr. Peck
~ Uncle Zeke lamented in his December 7, 1921 column that Bill had suffered a serious injury when "A lie jumped a cog the other day and struck Bill on the knee and nearly put him out of commission."
~ Junior Copeland, Bill’s grandson, told this writer that his father related an episode to him which he recalled from his youth in Orlando. It seems that Bill was seen by a neighbor walking with great haste up the railroad track in Orlando and called to him to stop and tell him "a lie." Bill, seeming to be in deepest despair, kept walking by at a fast pace, saying "I don’t have time to stop. Mary Dolan at the Dolan Hotel fell and broke her leg and I’m going after Doc Peck." Of course, the Dolan girls at the Dolan Hotel were held in highest regard by the residents of Orlando and the neighbor rushed to the hotel to check on Mary’s injury. Of course, to Bill Copeland, the master prevaricator of Orlando, there is a sucker born every minute, as famously said by P. T. Barnum, and his hapless neighbor made the trip to the Dolan Hotel to find all the Dolan girls in fine health.