A Hero In the Hedgerows 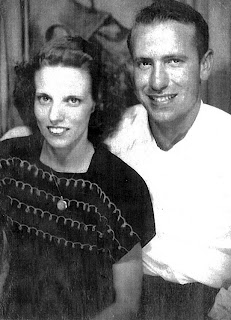 bits, squirrels and deer on Posey Run. He loved to till the soil and see vegetables grow. He watched cowboy movies with his wife, Mildred and played cards, croquet, dominoes, and badminton with his family and friends. He loved to make home-made ice cream, apple butter, and sauces, and to go to the woods for walnuts, hickory nuts and ramps. Charlie is remembered as hard working, optimistic and full of humor. He had a penchant for breaking out in song with the romantic ballad, ‘You Are My Sunshine.” Their son Charles recalls that when the final words of the chorus of “You Are My Sunshine” were still on his father’s lips, his mother would always respond, “Oh, Charlie.”


Family
Charles Dana Posey saw his first light of day in Clarksburg in the early winter of February 1925. Born to Ezra Posey and Gertrude (Skinner) Butler Posey, he was the youngest of his family which included two brothers, Amel and Kenny, two sisters, Mildred and Mabel, a half brother, Gene Butler, and a half sister, Zella Butler. Ezra and Gertrude had a farm at Posey Run. Ezra farmed some and also worked for the railroad as a cook. Farming was marginal as far as income was concerned and the railroad work was spotty. So, Ezra went to Clarksburg for a while for work and that was where Charles was born. Later, Ezra and Gertrude moved back to Orlando when Ezra's work at Clarksburg ended.

Charles Dana Posey's paternal grandparents were William Sanford Posey and Sarah Elizabeth (Riffle) Posey. William, who was known all his life by his middle name, Sanford, was the son of William Patrick Posey and Sarah (Stump) Posey. Sanford and Sarah had six children: Rozina (known as Rosie), Allie, Marshall, Ezra, Carrie, and Patrick. The oldest daughter, Rosie was married briefly to James Lough, but that marriage ended soon after the marriage and Rosie remained single the rest of her life. Rosie would frequently comment with respect to her brief marriage that her former husband "could deceive the very elect."

Orlando School
During the 1930’s, Charles attended the Orlando School through the eighth grade. A well liked student, Charles became even more esteemed when he was selected 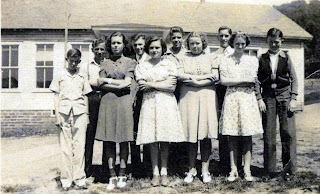 as the janitor of the school and had money to spend on candy and pop. In the eighth grade, Charles was a classmate of Junior Hurst, Pauline Bennett, Ruth Mick, Bud Mick, J. C. Foster, Jack Riffle, Claude “Clutch” Riffle, and Kathleen Sharp. Ruth Mick remembers Charles as a quiet, thin, blond-haired boy with a fair complexion. Charles completed the eighth grade in 1941, little knowing that in two short years he would be conscripted into the United States Army. 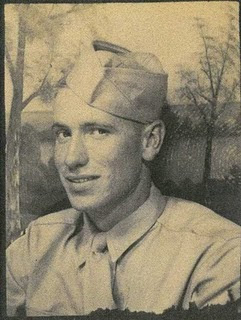 y 1943, Charles had just turned eighteen by a couple of months and the ever-vigilant draft board sent Charles a congratulatory letter advising him that he had been selected to join the largest army club in the country. After the usual efficient military screening, the army decided that Charles would make an excellent chef and he was sent to sharpen his culinary skills at the bakers’ and cooks’ school at Camp Forrest, Tennessee. In June, 1944, after becoming proficient as an army cook, Charles was sent along with the 329th Infantry Regiment to France. The 329th landed at Normandy on D Day plus 17 (June 23, 1944), and was immediately sent to the front lines to relieve the 101st Airborne Division, south of Carenton, France. In its usual characteristically “fubar” fashion, the 329th told Charles that they had enough cooks and handed him a rifle and bandolier and anointed him an infantryman even though he had been trained to make bread and cook potatoes.


Left: Charlie in uniform
Right: "From Cornrow to Hedgerow" by Keith Rocco, illustrates battle in the Normandy hedgerows. 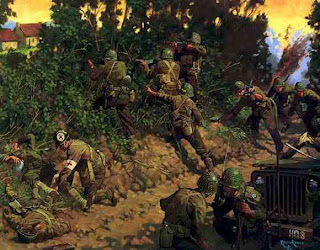 Seventeen Days in the Hedgerows
Hedgerows were an unsettling scene to infantrymen. Not only did they provide cover for the defending German paratroops and 17th German SS Division, they also limited the use of American tanks and other armored vehicles which usually supported the infantry. The 329th encountered the dreaded hedgerows at the small French town of Culot. The “breast fire formation” used by the 329th to attack the hedgerow defenses made “sitting ducks” of the American infantrymen and the German 88’s, machine guns and mortar fire reaped huge casualties among the mostly teen-aged boys comprising the 329th. Huge losses were incurred each day and miraculously Charles made it through seventeen days before a German mortar exploded behind him, nearly ripping his left hand from his arm and leaving shrapnel throughout his back and arm. His hand dangling from his arm, attached only by skin, Charles was evacuated to the rear to a military hospital, his fighting days over.
Left: Location of the town of Culot where Charlie fought.

Right: Photos from the internet of the time and place where Charlie Posey served.

A Medical Marvel
The thick Posey skin saved Charles from a future as a man with one hand. When he was evaluated at the field hospital, the army surgeons stabilized the dangling left hand and recommended that Charles be sent back to the United States by the next medical ship for further evaluation and treatment. At this stage of the war, public opinion was being jarred by not only the massive casualties and deaths of young American men but also by the thousands of amputees returning to civilian life. The Army Medical Corps had resolved not to take the easy route and amputate but in marginal cases to make the effort to save as many limbs as possible. By August 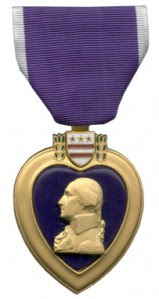 1944, after a mere two months in Europe, Charles, the erstwhile cook and infantryman, found himself back in the United States at Walter Reed Army Hospital in Washington, D. C. where he received the first of numerous surgeries to re-attach his hand and to remove shrapnel. For the next two years at Walter Reed and at the Ashford 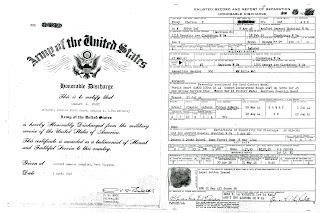 General Hospital in White Sulphur Springs, West Virginia, Charles became very familiar with surgical procedures and became somewhat of a medical marvel. After nearly two years of surgeries, Charles had recovered some limited use of his left hand. Although his hand was gnarled in appearance and limited in the amount of weight he could lift, twenty-one year old Charles was separated from the service in April 1946 with a certificate of disability to go with his Purple Heart.

Right: The Purple Heart
Left: Charlie's discharge papers
Life as a Civilian
Charles returned to Clarksburg resolved that his war injuries would not control his future life. In his youth, Charles had been a willing worker. When he was still barely school age, Charles had carried water to pipeline workers laying pipe through the country near his Posey Run home. Many a summer day was spent hoeing corn from daylight to dusk for neighboring farmers for twenty–five cents a day. And of course, he was a full-fledged janitor at the Orlando School when he was ten or eleven. So the inconvenience of a crippled hand did not prevent Charles upon his return to civilian life from obtaining employment with the Carnation Milk Company, and later with R. D. Wilson and the Fittro Brothers in Clarksburg as a truck driver. Subsequently, Charles attended machinist school and worked for Goldsmith and Black as a vending machine repairman. Toward the end of his career, Charles was employed by the Clarksburg Park Authority and Harrison County as a maintenance man at the Harrison County Courthouse. 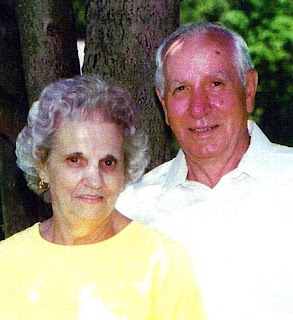 Words of Praise from a Son
The Honor Guard crisply cocked their M-1 rifles and fired in unison over the freshly dug grave of their departed comrade in arms. The staccato sound of the honoring discharges echoed throughout the adjacent countryside, barely disturbing the tranquility of the beautiful day. The American flag draping the casket was folded with precision by the aging honor guard veterans and presented to the deceased’s youngest son Ronald. On November 16th, 2009, Charles Dana Posey was lowered into his final resting spot in the Lumberport Lion’s Club Cemetery with full military honors. It was fitting that he died one day after Veteran’s Day 2009 closed its books on another annual remembrance of the heroes of this nation’s battles.

Charles Dana "Charlie" Posey, a son of Oil Creek, gave much to his country. He revered his family, and he made the most of his life. As his father reposed in the casket behind him, his oldest son, Charles, praised his father’s life on earth. Such loving remembrances reveal a beloved father and husband and a time well spent on earth by Charles Dana Posey.
. . . . .
Note: Many years before Charlie's parents married his mother was widowed with two infants when her husband Thomas Butler was murdered. She had been a teeage when they married, and was still a teen when she was widowed.