By Helen (Hawkins) Losh as Told to David Parmer

There are lots of old adages about first loves or infatuations. “First love is only a little foolishness and a lot of curiosity.” “We always believe our first love is our last and our last love is our first.” We could go on and on. Well, “love,” to young sixteen year old Helen Hawkins of Dumpling Run, was a long painful bicycle ride, a ride she remembers to this day and now can laugh about, but at the time it wasn’t funny.
All You Need is a Good Horse
In 1936, Helen Hawkins, the youngest daughter of Oscar and Bernice (Mick) Hawkins, lived over a mile up Dumpling Run. At the time the Dumpling Run Road was a hot, bumpy, dusty road in the summer and a thick, gooey mess of a road in the winter. But, like every good farm family with a good horse, roads in summer or winter were no problem, and riding a horse was an effortless way to get around. Helen would often mount the family riding horse “Mary” to go to the store or to visit a friend. Her brother Oscar Junior rode the same horse to visit his Orlando girl friend, Jane Stutler. And, as every horseman or horsewoman will tell you, it is easy to maintain your dignity riding a nice looking horse. 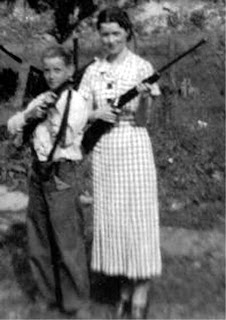 Enter the Sorcerer’s Device: The Bicycle
Bicycles are fine to ride on smooth pavement, and will they fly!! The modern bicycle, with thin tires and gears on the handle bars, is a wonderful way to make the asphalt disappear behind you on a Sunday afternoon. Helen’s oldest sister, Thelma (Hawkins) Fletcher, had left Dumpling Run after graduating from Burnsville High School in 1928, married Chester Fletcher, and moved to Chicago, a city with thousands of bicycles. Ever the one to spoil a younger brother, Thelma decided that her young brother, Oscar Junior, should have a bicycle. Keeping in mind the troublesome Dumpling Run Road, Thelma bought Junior the biggest and most rugged bicycle money could buy—a boy’s bike that is, not a girl’s bike with a sloping center bar to accommodate the dresses that all girls of the 1930s wore.
.
Right: Helen's sister Thelma (Hawkins) Fletcher and their brother Junior
.
Helen Had Eyes for Denver
At the age of sixteen the thoughts of young girls often turn to love. In the summer of 1936, Helen often cast admiring glances toward Denver Losh, Jr. whenever she might see him. Denver lived at Cogar, over two miles southeast of Burnsville, with his parents, Denver Sr. and Della, and his younger brother Lawrence. In 1936, if a girl took a hankering to talk to a boy, it had to be done in person because there were no telephones on Dumpling Run. Helen, a young lady of independent mind, decided that she would visit Denver Jr., and what a better and unusual way to go than to commandeer her brother’s brand new bicycle.
The Ride of Her Life
It took Helen only a short time to learn to balance herself on her brother’s bicycle. The only trouble was that Helen was but five feet tall and the bicycle seemed as tall as she and almost as heavy. Helen decided that since she could pedal the bicycle and keep it going without crashing it, she had passed the test for her bicycle license. And off she went.
Cogar seemed a short distance by train. With the blink of an eye, the Cogar station was just around the corner from Burnsville. But, that wasn’t quite the way it seemed to the petite Helen as she struggled to push the heavy bicycle up the hill near the mouth of Oil Creek. And the pedals seemed to be farther to the ground than she remembered when she had been learning to balance and ride the two wheeled monster in an upright position. Or, her legs seemed to have shortened. In any event, before she got to the Oil Creek Bridge, the thought occurred to Helen that this simple bicycle trip maybe wasn’t such a good idea after all. However, stubbornly, she continued on.
As Helen pedaled onto the brick street in front of the Charlie Crutchfield house on Main Street in Burnsville, her teeth began to rattle along with the fenders of the monster beneath her seat. It now occurred to her for the first time that brick streets are not very smooth. And it was getting more difficult to pedal that fool bicycle with her dress bunched up on the center bar. In addition, Helen didn’t remember Burnsville being such a large town, from one end to the other. And, it didn’t help matters any when the street ran out of bricks at the Baltimore and Ohio Railroad Depot and reverted to a dusty, bumpy, rock-based teeth shaker. But, Helen was a trooper and she continued to pedal on.
Dogs like to chase people on bicycles. As if Helen didn’t have enough to worry about, those pesky four-footed creatures became just another problem. And it seemed like there was a dog at every house she passed which either liked to bark at passers-by, or test his mettle in a speed contest against the two-wheeled racer. But Denver would be glad to see her, she was sure, so Helen pedaled on. However, it surely seemed farther to Cogar than what she had thought.
Every passing car raised a cloud of dust which completely enveloped Helen as she strained to keep the ponderous bicycle moving. She should not have bothered to wash her face and put on a clean dress before she started. But, Denver would be glad to see her, dirt and all.
Finally, Helen could see the Losh home as she laboriously cranked the contrary bicycle through the town of Cogar. “The trip will be worth it just to see Denver’s smile,” she thought, despite the soreness she was feeling in the region of her derriere and the thought of having to make the return trip to Dumpling Run.
Something unsettling came over Helen as she neared the Losh home on the blasted bicycle. It was altogether too quiet and there were no familiar faces to greet her. She thought that maybe the family was inside despite fact that the windows were shut on this hot day. Dismounting the unfriendly bicycle and walking with the stride of someone who suffered from hemorrhoids, Helen climbed the porch steps and knocked on the door. She knocked to no avail. Could it be possible? No one was at home!!
It wasn’t a happy bicycle ride back to Burnsville and then on to Dumpling Run. But it was a bicycle trip that she would remember, even five years later in 1941 when she exchanged vows of marriage to her beau Denver at the Burnsville Methodist Church. Moreover, Helen (Hawkins) Losh of Narrows, Virginia still remembers the trip of seventy years ago with humor and nostalgia. As for the bicycle – Helen doesn’t know what became of it, and she doesn’t care.
.