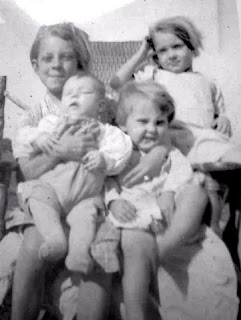 My memories of Orlando go way back- I am now 84 years old. My parents lived outside of a small town called Belington, WV. Every summer, my Dad would take me, along with my mother, my sisters Rose and Martha, and later my little brother Franklin, down the road to the town of Norton and put us on the train to Orlando. There we would spend 2 or 3 days visiting our family, then we would get on the train again to go to Copen, where my Grandmother Estie (Henline) Godfrey Thomas lived, to stay the rest of the week. 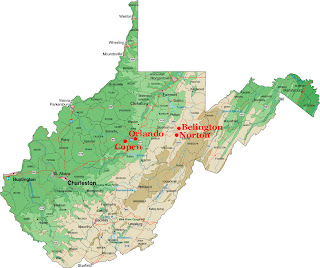 Right: Map of West Virginia showing the towns mentioned in this entry.

In Orlando, we would stay with Aunt Clorie, and her brother Uncle Heater Huck [Ernest Roy Henline] and my mother's cousin, Opal (Jeffries) McCrobie. When we would arrive, Uncle Heater always had bubble gum waiting for us- those big gumballs! He would put Aunt Clorie in charge of the gum to hand it out to us as she saw fit.

We would also visit Uncle Polar [Verdis Carder Henline] and Aunt Vadie, [Vada Belle Riffle] who lived up a steep hill that started up by Uncle Heater's and Aunt Clora's lawn- and I do mean straight up! We liked playing wi 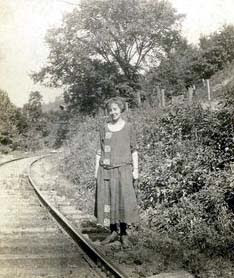 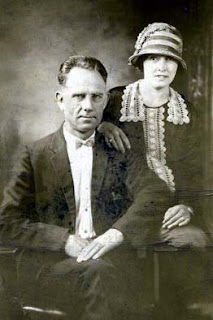 Polar's daughters, Mary and Anna Belle. Uncle Polar was a tall man, and when I was very small I was afraid of him because I thought he was a giant!

My mother was Sophia (Godfrey) Jarvis, the oldest daughter of Estie (Henline) Godfrey Thomas by her first and late husband, Malitas Godfrey. Mom only had one whole brother, Harry, who then lived in Clarksburg. All the other siblings, the Thomases, were her half brothers and sisters. Their father was Estie's second husband, Mike Thomas. My mother's father had died from typhoid fever when she was just a toddler.

My father was Jesse Jarvis. He met my mother when she was working at Dick Skinner's restaurant and he came in as a customer while traveling for his job with the mines. They were 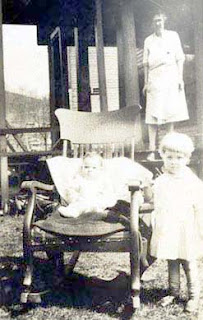 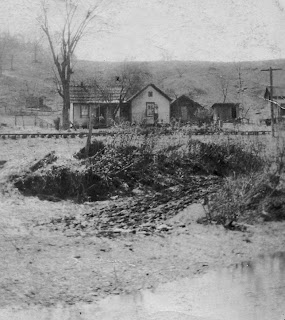 After all these years, my memories of Orlando are still very vivid. My visits there were very happy times. Uncle Heater, Aunt Clora, and her children Opal and Coleman still lived in the house in Orlando. Sometimes Aunt Margaret (Henline) Nixon would come to visit when we were there and that was always fun! We liked playing with her kids, June and Billy. At night, the sleeping quarters were scarce when everyone came to visit. They would make palats on the floor for us kids, and that was fun.

One of the biggest parts of life and times in Orlando was of course the trains! Several of our family members worked for the railroad, including Heater Huck. The train whistles, the sound of the train chugging on the track, and how they'd wave at us when it passed by are other fond memories. After the train was gone, it left a special kind of dust on the bushes and trees near the tracks. I can still see it and smell it to this day. 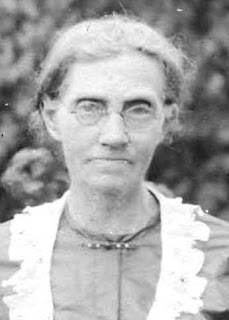 I remember visiting at the house in Orlando when my great grandmother Samantha (Skinner) Henline was still living. I recall her as being quite old and ill and she spent a lot of time in bed. Someone would put me up on her bed, and I would pretend to feed her. She was such a sweet lady, she pretended to eat my imaginary food. I remember going to her funeral. I was four years old when she passed away in 1930. In those days, there was no road up to the cemetary on the hill, so we all had to walk as they carried the casket all the way to the top of that steep hill. I was so little, all I could see were the legs of the adults, and my little legs were getting so tired. Then one of the uncles came along and scooped me up and put me up on his shoulders, and carried me the rest of the way. There is now a good road that goes up there.