Flora (Heater) Maynard Pulfrey of Port Charlotte, Florida is the great-granddaughter of Lorenzo

Flora sends us a story of yesteryear and a home remedy for colds and lung congestion.

by Flora (Heater) Pulfrey
Medicine – Skunk Oil
for Colds and Lung Congestion
Sometimes a farmer discovered a den of skunks on his farm. The skunks were dug out of their den and killed for their hides which were worth about $1.50 to $2.00 each.
When the skunks were skinned, some of the carcasses had the scent glands removed, after which, several skinned skunk carcasses were placed in a oven roaster and roasted until very well done. Some people ate the roasted skunk meat and other house wives discarded the roasted carcasses. During the roasting process the oil con 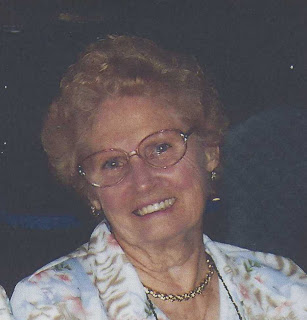 tained in the skunk fat melted and was collected in the bottom of the roaster pan. This skunk oil was then poured into a jar and could be kept indefinitely without any preservatives. When children had congestion in their lungs, mother spread the skunk oil all over the sick child’s chest and then usually covered it with a piece of cotton flannel. It was presumed that the skunk oil cured the congestion in the child’s lungs.
This was a very common and widespread medical treatment in the 19th and early 20th centuries.
Flora tells us that the same skunk recipe for a lung congestion remedy was also used in South Dakota which is the home state of her husband. Flora thinks the skunk poultice remedy also aided in the prevention of the spreading of colds because the smell kept other potential victims out of range.
Above, left: Flora (Heater) Pulfrey]
Below, right: Clora Henline
Comment on Skunk Oil 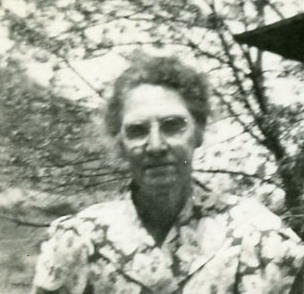 Helen Jeffries remembers that when one of her children was heavily congested with a cold in the late 1940’s, her mother-in-law, Clora Henline, gave her a jar of skunk oil and instructed her to apply the skunk oil to her child’s chest and cover it with flannel. To demonstrate variations on the” skunk oil cure,” Helen also recalls that her friend Lura (Barnett) Williams was visiting her brother Bill Barnett in Orlando and arrived with a cold. Bill gave her a cup of “skunk oil tea” which he guaranteed would break up the congestion.