Following is an excerpt from Christian Kuhl's Civil War memoirs written in 1911.

1861
"We at once proceeded up the Little Kanawha River and found ourselves at the mouth of Oil Creek at a bountiful repast at Old Col. Yancey's - the first of the great army dinners ever prepared in Braxton during the Civil War, prepared I suppose, by the family of Col. Yancey and friendly neighbors to still our first military wolfishness. Thanks to those kind friends, as well as to those long departed orators whose patriotic and able speeches we enjoyed so much after dinner, by Capt. Mitchell, Col. Yancey, Hon. Robert Marshall, Rev. Mr. Wm. Ervin of the Stouts Mills and others. After dinner I helped Captain grind his little Spear at Yancey's grindstone and the Captain remarked--"Now if we meet the enemy I shall endeavor to make my mark." So getting another recruit -namely Jacob Plyman who, Col. Yancey assured his family, should be well cared for if he went. We proceeded to Lewis County to the Skin Creek Church where we sheltered for the night."1
To the right above is the Confederate flag that was flown from March 5, 1861 to May 26, 1863.


Some of the players in the above narrative: 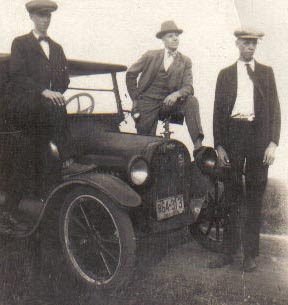 2. Capt Mitchell was John Elam Mitchell was a Methodist Protestant minister, active in churches along Clover Fork and Oil Creek. His family had settled south of Jane Lew. Another source confirms that he "raised a company of soldiers for Confederate Service 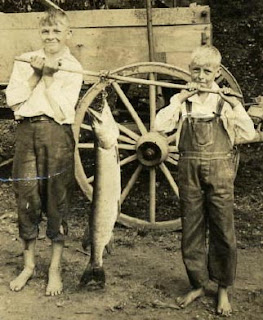 in Gilmer County." One of his sons, Melville Mitchell, joined the 62nd mounted infantry, Co. G. This was the company of Imboden's Raiders in which several Oil Creek/Clover Fork men served. Another relative, Benoni Mitchell, was tried for southern sympathies along with our Clover Fork men.
The Rev. John E. Mitchell was the grandfather of Homer Mitchell who married Lula Henline.
To the right are greatgrandsons of the Rev. John E. Mitchell, Homer and Stanley Mitchell of Orlando, with a fish they caught in Oil Creek in the 1920s. (Click on photo to enlarge it.)

3. Joel Yancey b. 1798, settled at the confluence of Oil Creek and the Little Kanawha. 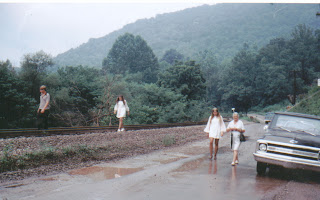 He and original Orlando Settler Alexander Skinner had business dealings, and two of Yancy's daughters would stay on Oil Creek. Mary Ann would marry Confederate Veteran James N. McPherson, whose parents were original settlers on Oil Creek.
To the right, a century after the repast at Col. Joel Yancy's, three of his xg grandchildren, Gary, Kim and Nancy Stutler, children of Bill and Pat (McPherson) Stutler, walk Oil Creek Road home from Sunday School at the Methodist Protestant Church in the 1960s with their grandmother Edith (Skinner) Stutler. (Click on photo to enlarge it.)

Below is the text that comes before the excerpt printed above. See the rest of the memoir provided by David Kuhl at the site of Hacker's Creek Pioneer Descendants.

CHRISTIAN KUHL OF THE GILMER RIFLES
Company D, 31st Virginia Infantry
August 12, 1911
My daughter has for many years asked me to write down for her future references my experiences and what long has become history of the "War of the Rebellion", to tell it just as it happened to me. So, I will proceed to give a true statement that may be relied upon by future generations.

On the 31st day of May, 1861, there arose a cry that the Abolitionists were coming over from Ohio and elsewhere from the North to invade Virginia, now West Virginia. They overran our country, destroying property, Compelled our men to enlist, taking horses, cattle, arms and ammunition. They also insulted mothers and wives when the men were away from home. This was Too strong a proposition for freemen to sit still and do nothing and not take sides. So I, with many of my fellow citizens of Gilmer County, gathered up all available arms and ammunition.

We had Squirrel Rifles with a few rounds of ammunition some had Dirk knives and others had Revolvers (those old fashioned guns were known as Pepper Boxes). Two "pepper boxes" shown to the left. These guns were not dangerous unless they were thrown at a man, certainly not dangerous as firearms. We supposed that the object of the invaders was to abolish slavery in Virginia and throughout all the slave states. This supposition proved true later on. In 1862, I believe, Mr. Lincoln's Proclamation declared all the slaves freed in the southern states. As above stated in May 1861, at a general meeting in the town of Glenville, Gilmer County, West Virginia and then Virginia, I volunteer with many of the Democrats from Said County and we organized a Company of Infantry called the "Virginia Volunteer Infantry". This Company elected Rev. John Klem Mitchel as their Captain, who was killed soon after in a skirmish near Arnoldsburg, Virginia. 3

Said Mitchel a brave, gallant officer fell while leading his men in battle. The other officers at that first organization were as follows: First Lt., H. McNemer, Samuel S. Stout (youngest son of the late Hezekiah Stout), 2nd Lt., Lem. C. Lynch, 1st Sergt., Fleming E. Turner, 3rd Sergent., and James J. Norman, 2nd Sergt. Later on from time to time and at the other reorganizations their successors were elected as follows: J. S. Kerr McCutchen, Captain, who by seniority was promoted Lt. Colonel and after the war migrated to California. He was a most heroic officer and survived the many conflicts in which his Company and Regiment engaged, but he carried several battle scars on his body. He still lives in Exeter, Tulare County, California. He is now well stricken in years, 80 some years old, and as honorable as he is old. Lt. Stout also still lives and is in California.

At the reorganization in 1862, this scribe became promoted to the Office of the 1st Sergeant, in which capacity he served until the surrender in 1865 and commanded Company "D" through many of the successful battles in which said Company and Regiment were engaged. He too, was wounded four times and once taken prisoner. Wounded and taken prisoner at Ft. Stedman near Petersburg, March 25, 1865, just before Lee's surrender in April 1865 at which my brigade made a desperate dash through three lines of the Union Yankees in the midst of the Grant's forces. For want of promised support, which failed to get up in due time, proved a failure and resulted in the capture of many of our best men in company with myself and Captain John H. Yancey, a gallant officer and son of Hon. Col. Yancey who then lived and owned a large farm at the mouth if Oil Creek, Braxton County, West Virginia. Said Captain Yancey still has a sister living on Oil Creek who is the wife of Rev. Neal Clawson. This scribe passed through the deadly scenes some 32 or 33 regular hard fought battles besides picket and skirmish fights, and under the great leadership of those great and heroic Generals Lee, Stonewall T. J. Jackson, Jubell Early and Yervill Gorden, Pegram and others usually came out victorious.

Now back to Glenville in May 1861, a company was wanted to have 100 men, but we only succeeded in enlisting some 60, and being pressed for time we moved southward to a place called Rendevoose (probably rendezvous), and scene of action with what forces we had, or we would be cut off by the invading foe.
continued. . .

Comments
comment 1
War was declared April 12, 1861. By May, 1861 Christian Kuhl had joined with 60 of his family and neighbors to form a volunteer company that called itself the Gilmer Rifles. It became Co. D of the 31st VA Volunteer Infantry.
Two other first person accounts of the Civil War from men in the 31st
http://www.fsu.edu/~ewoodwar/hall.html The Diary of A Confederate Soldier: James E. Hall of Elk Creek, Barbour County, near Philippi
http://spec.lib.vt.edu/civwar/memoirs.htm Memoir of Archibald Atkinson, Surgeon, CSA born Smithfield, Isle of Wight Co., Va., February 23,1832;died Baltimore, Md., October 29, 1903.

1. This is from a twenty-four page document written by Christian Kuhl, First Sergeant of Company D, 31st Virginia Infantry, aka Gilmer Rifles, CSA. The memoirs were compiled in 1911 from his memory. They have been typed and transcribed several times and probably contain many errors. They are provided for your use by David B. Kuhl.

2. Connie Ball, 2380 Crescent Dr., Paris, TX 75460. 3 June 1999, about Capt John Elam Mitchell, from Rootsweb: "Raised a company of soldiers for Confederate Service in Gilmer County, Virginia (now West Virginia) and went out as their Captain. He had to resign on account of his health, but stayed on as a Chaplain with the Confederate Army in Virginia and Maryland until his death on 25 May 1862. He is buried under a church building in West Virginia."

3. Kuhl's memory that John E. Mitchell died soon after a skirmish at Arnoldsburg differs from Connie Ball's information that he resigned, served as a chaplain and then died.