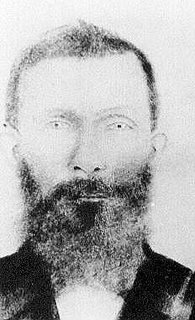 with brothers, uncles and neighbors, fought with the Confederate Army. Jackson was a private in the 62nd Mounted Infantry, Company G. He entered the Army 16 May 1862 in Braxton County. A post-war source listed him as wounded in action 15 May 1864 at Battle of New Market. The wound he sustained at New Market never healed. His grandchildren remembered him as an invalid all his life.

New Market was a severe blow to the 62nd. Many men were killed, including local men, Privates Andrew Heater and Eli Sanders and Captain Conrad Currence.

Jackson McWhorter Skinner was born 1843, d. 1891. He lived up Clover Fork and he was a farmer. He had a fair complextion, light hair and gray eyes. He stood 5'7". Jackson was the husband of Patience Duvall and father of Gideon, George Delbert (Dick), Annie, Clara, Lola, Lloyd, Ed and Earl (Pappy). He was my grandmother's grandfather. He was the grandson of Alexander and Catherine (Scott) Skinner