Don't Sit Under the Apple Tree

Many events have led Orlando's fortunes: the end of the Indian wars, the Civil War, the coming of the railroad, the departing of the railroad. I'd say the next big event wasn't the Great Depression of the 1930s but World War II. 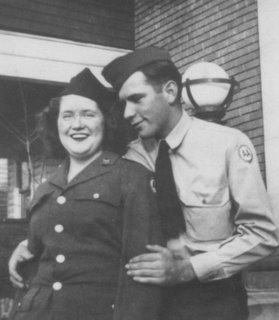 I'm not including the Depression because Orlando had already hit its own depression with the leaving of the railroads but more importantly because I suspect this isolated community was more capable of self-sufficiency than most. It wasn't so far from a frontier community that it couldn't revert back to that hard but sustainable life. I could be wrong. I'd love to hear what others think. However, World War II following the loss of the railroad drained the life right out of this 150 year old community. Certainly there was a war to be fought and won. Lots of Orlando boys marched off to keep the world free. Our first daughter marched off in this war. Juanita Stutler, daughter of Oras and Edith (Skinner) Stutler. 'Neet fibbed about her age and did nuring work until the Army discovered how young she was. The photo above is of her with her future husband, Lee Burgett. 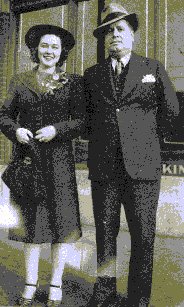 The war took its toll on the town in another way. There were good paying jobs to be had in the manufacturing cities. Another of Oras and Edith Stutler's daughters, Mary (pictured to the left with her Uncle Jack), chose Detroit because Oras' brother, Jack, was there. She found work she loved as a dental assistant downtown and she found her husband, too.

In the years after the war all five of Oras and Edith's kids would move to Detroit. Note the echo of the other March 21 entry, just before this one: "Almost all of the William J. Riffle family moved to Akron, Ohio during World War II to work for Goodyear Aircraft, building the Corsair fighter planes."