In the mid 20th century, 1930 to maybe 1970, life along Oil Creek was caught in a quirky time warp. I treasure the stories of the grandsons and granddaughters, my generation and those a few years older than me, who hold bits of that world in their memories. It's hard to imagine today. The March 24, '06 article on William & Vada Riffles' Family is the first entry that focuses on life on OIl Creek. 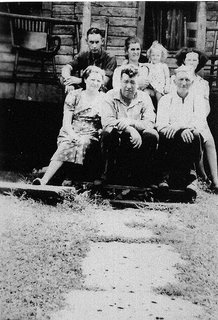 Edith and Oras Stutler raised their five kids, including my mom, in a house on Oil Creek that I never saw. By the time I came along in 1947 Edith and Oras had moved into a veritable gaslit palace (albeit with a handpump and outhouse, and very possibly resident ghosts) that had been the Dolan Hotel in Orlando's heyday. But that wasn’t where they lived out the bulk of their life together. The Oil Creek place wouldn't have been a city house, by any means, but fellow genealogist and a friend of the family Carolyn (Hintzman) Ramsay assures me the house wasn't as primitive as the Donaldsons' on the WPA photo essay. (See Feb 27 entry "Photo Essay" and http://newdeal.feri.org/library/l54.htm and http://newdeal.feri.org/library/l55.htm)
That isn't to say that there were not houses like the Donelsons'. I visited some in the 1950s and early '60s.

Carolyn wrote the following about the my grandparents' Oil Creek home. "The front porch went across the entire front of the house with steps in the middle. I remember the train tracks went right in front of the house next to the river & in the middle of the night the train's headlight would make scary shadows on the ceiling, or so it seemed to a 6 year old!

"I remember the living room had a large buffet/bureau with a mirror on the back of the top. The furniture was HUGE overstuffed couch & the matching rocker had wide wooden arms. I don't really know what they were made of, but it looked like leather. [I think I know that furniture. The couch and chair were stuffed with horse hair and, believe it or not, the couch opened up into a bed.]

"I THINK the light was from oil lamps & I don't know about heat, because I was only there in summers. "

I really don't remember the kitchen, but the upstairs bedroom where I slept with Jane [my mother's youngest sister], was in (as I remember it) a rather unfinished attic room." -Carolyn

I still have lots of questions about the house itself. How many rooms were there? I would suppose there was a separate kitchen, with an ice box? wood stove? Also, I suppose Grandma & Grandpa's bed was in the main room, because even at the Orlando house (the former Dolan Hotel with lots of rooms) they had their bed in the living room.

The photo was taken, I'm told, on the front porch of the Oil Creek house. Oras (grandpa) is in the middle on the bottom step, his sister Mary in on the left and his dad, O.M. Stutler, is on the right. Edith (grandma) is in the center behind. If that is my sister Jackie in her arms, the photo was taken about 1942.