An Heirloom from Patience Duvall 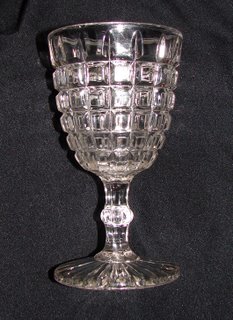 Patience Duvall was born in 1846 at the Indian House, located at the top of the ridge that separates the Oil Creek watershed from the West Branch of the Monongahela River (that goes up through Weston). Several of her great-great grandparents, including John P. & Martha Duvall, and John & Sarah (Roby) Godfrey were pioneers of this area, during the time of the Indian Wars.

Patience was the oldest of 10 kids. When she was 21 she married one of Alexander and Phoebe Skinner's boys, Jackson McWhorter Skinner. They married on Christmas Eve in 1867, He was a Confederate veteran, wounded in the leg at the Battle New Market in 1864. His wounds never really healed and much of his life he was an invalid. Still, she and Jackson set to farming on Clover Fork and had 12 children.

The water goblet above was part of the set Patience had when she "went to keeping house." It is molded glass.

In the 1960s her grandson (my great uncle) Hayward Skinner told me a little about her. He said that because Jackson was Confederate, a traitor, life was very difficult for them. He told me they had a little peek-hole shuttered window in the door to the home. I later learned that in 1869 Jackson was tried & convicted in a kangaroo court of Confederate sympathies.

Uncle Hayward also said that because of Jackson's disability, Patience took care of the farm and raised the family pretty much single handed.

Jackson died in 1891 at the age of 46. Patience, 44 at the time, would live another 40 years. In time their second oldest son, Gideon Columbus, took over the family farm on Clover Fork. Patience and her oldest son, confirmed bachelor Dick (George Delbert) Skinner moved to town and went into the restaurant business. She worked behind the counter, with her grown kids and growing grandkids around her. She and Dick lived just a few steps from the restaurant in the rooms above Charley Knight's store. In her last years she was an invalid and she died in 1931.