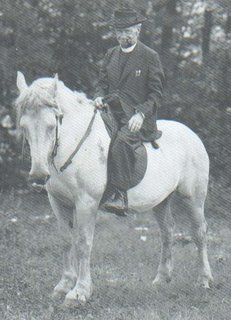 was the pastor of St Michael's Roman Cathlic Church and two similar parishes: St Bridgit and St Bernard. Until the end of his carreer when he grudgingly allowed himself to be chaufered in autos, "he traveled his circut on horseback with vestments, sacred vessels and altar stone strapped to his back.1"

It was under Fr. Quirk's leadership that both of St. Michael's Orlando buildings were constructed. The wooden church on the hill was built in 1907 but it was hit by lightning and burned in 1915. The brick church near Oil Creek was dedicated in 1916.

Commenting on the choice of the brick church's location on the flood plain Fr. Quick said "The young generation has grown so infernally lazy that they hate to climb the smallest elevation.2"

Fr. Quirk's brother told a reporter this about the priest3.
"Monsignor Quirk was a fugitive from England because he had assisted political prisoners to escape while he was a resident of that country. He believed that the prisoners were being unjustly treated. The earldom he renounced was that of Mount Eagle. He renounced it because he would have had to renounce his church and affiliate himself with the Church of England, he once told friends, and further because 'it would only be an expense.'"

"It was on March 7, 1845, that Thomas Aquinas Quirk was born at Clonmel, Ireland. He was the son of a captain in the English army. Because his father was transferred a great deal he lived in England, Canada, India, and Australia with his parents while he was a very young child." 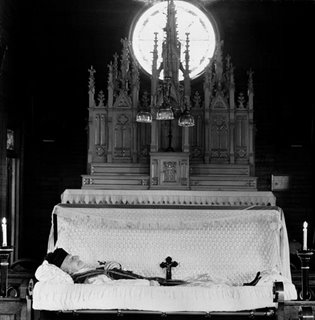 "The young man entered the English army where he was a cadet. At the age of 17 years he was sent to the United States in 1862 to study the warfare tactics of the Federal army. He became a member of the 69th Infantry of New York, Union army, and served in several skirmishes in the Valley of Virginia."

"After the war Father Quirk returned to England and in a short time he left the army and went to Paris where he studied for five years at St. Sulpice school for the priesthood. At the same time he attended lectures in law and medicine at the Sorbonne university."