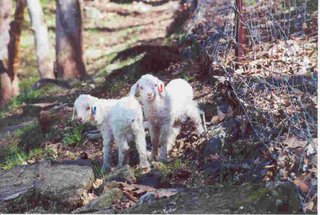 Bob and Ann Craven moved to Orlando from New England nearly 30 years ago. They started out as business and education professionals but chose to maintain the farm lifestyle because of their love for farming and raising sheep. They purchased a farm on Clover Fork and moved their animals and fiber business to the hills. It was a big change. At their web site they say "The first ten years of our being farmers in the Mountain State were spent trying to settle in and get accustomed to farming in a very unique and different terrain. We discovered that fencing hilly terrain and managing animals in this environment differed greatly from what we had been used to. We now feel that we are entrenched here along with our flocks of colored and white border leicesters and angora goats..." 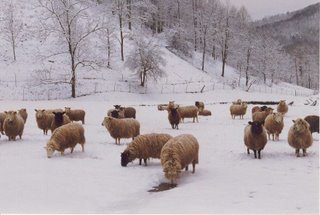 The Cravens produce a fantastic range of high end fibers and fleeces in a range of natural and dyed colors as well as white. Some of their homespun yarn is pictured to the left.

Their border leister sheep are the heart of their farm, shown here in winter.

"We have both colored and white stock in addition to cross bred sheep that have been fiber experiments. Our flocks are sired by registered border leicester rams. We have found these animals to be healthy, hardy and low maintenance. We run our sheep as closed flocks that are disease free. Our lambs and fibers are sought after by fiber artists. In addition, we also sell a number of meat animals. "

Kilmarnock Farm is cited on the National Geographic Map of Appalachia 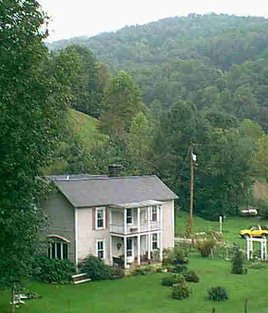 We're still searching for the builder of the Civil War era house at Kilmarnock Farm. John Carney tells us that in the early part of the 20th century his cousin's family, John and Agnes (Kilker) Carney, owned it

See also the entry for June 19, '06: The Ups and Downs of Sheep Farming