Peddlers and drummers were a colorful part of life in the Oil Creek watershed from early settlement to as late as the early 1950s. Drummers are more recent. There were many varieties of men and products and means of transportation involved with these itinerant salesmen.1

The gentleman to the left is a drummer, from the photo of the traveling bear act that stopped in Orlando. See the entry Oct 6, '06 The Bear Trainer. (Drummers are itinerant salespeople who sell the product and deliver later. They often represent particular manufacturers and they often carry sample cases.)Also in that photo is a former peddler, Mike Thomas. Peddlers, of course, go back to times before record. They carry their goods with them. Pictured here to the 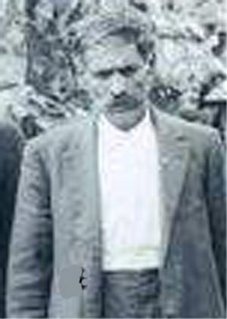 right is Mike Thomas a few years after he had left peddling for a more settled life.

David Parmer tells us "Mike and his brother Lis Thomas were brothers who had come to this country in 1902 from the part of Syria that is now Lebanon. They were pack peddlers who sold their wares throughout central West Virginia in the hollows and rural areas inaccessible to country stores.

"In Orlando Mike met a young widow, Esta (Henline) Godfrey, a daughter of Beham and Semantha (Skinner) Henline, whom he wed. Mike and Esta lived in Orlando in a small cottage above the Henline homeplace for a few years."

Mike Thomas belonged to a fascinating time and place in history He and his brother Lewis "Lis" Thomas were Syrian pack peddlers. "When my wife was growing up in the Henline household during the 1940s and 1950s she remembered Lis Thomas stopping by with his pack full of goods. She told me that everyone seemed to look forward to Lis' coming to show his wares. The packs had little pockets for the little things and it was chock full. The pack was also huge in comparison to the man."

What kinds of things were in the peddler's amazing pack? One source tells us "Their packs were well-equipped mobile stores containing scissors, razors, pins, buttons, ribbons, threads, needles, combs, soap, voile and muslin, lace and crotchet crafts, perfume, scarves, picture frames, pictures of saints, religious notions from the holy land, etc. and of course, whatever the customer needed could be supplied in the next visit.2" Another source adds to that list "small tools, cooking utensils, . . . bed-sheets, and sometimes . . . spices, pepper and seed.3"

As David Parmer suggests, the pack iself was a source of fascination. "As the peddler progressed on his journey, a leather pack could be collapsed to fold into another pack, and the continued trudging became less and less cumbersome. The demonstration of the packs was often a delight to children present at the time.4"

Mike and Lis Thomas were Syrian Christians; their culture and faith dating back to the very beginnings of Christianity. They were part of a large migration of Syrian Christians. Around the turn of the century many Christian Syrians fled to the New World to escape 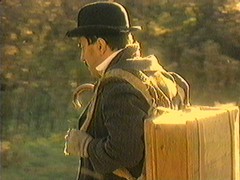 persecution by the Sultan Abdulamid, ruler of the Ottoman Empire which had ruled large parts of the Middle East and Mediteranian since the middle ages. Hundreds of thousands of Christians were massacred in 1895-1896, the Christian villages were burned and whole communities were forced out.5 The grueling work of pack peddling in this foreign land was the route many chose as they began to build new lives.

1. Edward C. Smith, A History of Lewis County West Virginia pg, 207.
Speaking in general of peddlers in Lewis County Smith says, ". . .peddlers who with a greater or less quantity of trinkets on their backs or of store goods in their wagons made their way from one settlement to another. A peddler's license fee was $25 per year, except for clock peddlers who paid $100. William T. Knotts and William M. Grimes were two of the first peddlers in the county who sold at retail "goods of foreign growth and manufacture." The old peddler was a picturesque figure as he made his way over the trails in his light wagon filled with his stock of groceries, notions and dry goods which he exchanged for the products of the farm. His wagon always was full, even at the end of the trip; for the goods which he took in trade were heavier and more bulky in most cases than those he sold. The peddler was always welcomed, for his wagon was the only source from which store goods could be procured by the families that lived in the valleys remote from the older communities, and he retailed not only goods but gossip of the whole region through which he traveled.
2. Dr. Najwa Nasr, Professor of English Linguistics, The Lebanese University Early Lebanese Immigrant Women to the USA
3. G. Bryan McKay, The Syrian Peddlers
4. ibid.
5. ibid.