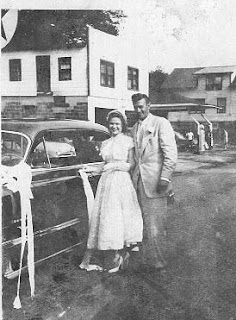 There's a kind of story that was common sitting on the porch of the post office or around the Sunday dinner table. It poked gentle fun at those we loved as it exaggerated the qualities of human nature we all share. These stories always had some basis in the truth and some bit of the outrageous.

Patricia (McPherson) Stutler, my Aunt Pat, used to tell this story on one of my great aunts, I can't remember which one. When Aunt Pat was maybe 12, the aunt in question asked little Patty if she would wash her dishes for a dime. Well, there was quite a stack of dirty dishes on the table and sink, but 10 cents was a lot of money, so she said, "sure!" Aunt Pat had pumped the well water, heated it on the stove, and was well into the task when the old lady opened the oven and pulled out a pile of greasy, baked-on-dirty pots and pans. Patty kept washing. Then the old lady opened a cupboard, and in it were stacks of dirty dishes! Kids didn't talk back in those days, but, as you might imagine, Aunt Pat never agreed to wash dishes for the old lady again.

To the right is a photo of Aunt Pat with her new husband Bill Stutler on their wedding day in the early 1950s. Bill Stutler was my mother's baby brother.

Dave Hyre sent the following tale told on Claude Linger2 whose exploits in the Burnsville flood of 1943, reported in the The Clarksburg Telegram, appear in the Oct '06 entry The 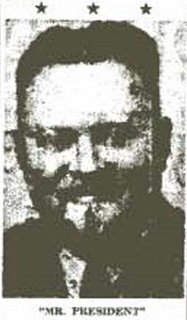 Burnsville Flood of 1943. There are obvious discrepancies between the following tale and the newspaper report. Even if the reader doesn't believe everything printed in the news, that reader would do well to note Denzil Stillwell's comment that Grandpa Vic was not above embellishing a story.

From Dave Hyre.......Brockton, MA.
"I share the following story sent to me October 2004 from Denzil Stilwell, Glenville, WV. - - -
' I remember your grandfather Victor Hyre. I believe he ran a pool hall which was once located between the old bank building across from the Gulf filling station and Carl West's beer joint about half a block west toward the tracks. I believe he sold beer because of a story that was told in which he was involved. That story has Claude Linger assisting Vic in salvaging things as the water began flooding his place, probably during the 1943 big flood. Claude would ferry stuff by john boat over to dry land and Vic would select stuff etc. Finally Vic loaded Claude up with a few cases of beer for some reason. Claude took that load to his house (about 150 ft away just west of Vern Wiant's house) and didn't return. Vic had to swim out.

'Grandpa Vic always embellished the story about how high the water got. That said, the pool hall was on the upper floors of Victor's Barbershop. So, if he thought that the beer supply needed saving, the water was rising pretty damn high. If I had been Claude emptying out Vic's beer supply, I would have taken a break too! '"
- Dave Hyre.......Brockton, MA 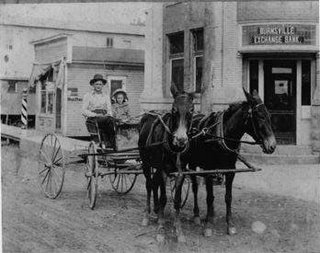 This ca. 1915 photo from David Parmer's collection shows the area in 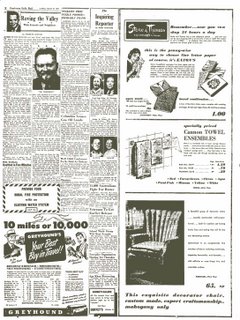 Dave Hyre's story at an earlier and drier time. David Bennett and his young sister-in-law Marie Parmer are in front of the bank and Vic's barber shop can been seen just behind them. At this point it the barber shop had only one storey.

Charles McNemar shares a 1950s article about Claude Linger. Click on the thumbnail of the page on the right to see a readable copy. The article shows that Burnsville's notable Mr. Linger was no stranger to tall tales.

The photo above left of Claude Linger is taken from the newspaper article Charles found for us.
see also
2 Oct '06 entry Buggyride to Burnsville
17 Oct '06 entry The Burnsville Flood of 1943.
3 Nov '06 entry Several of Orlando's Citizens

1. Aunt Pat is Patricia McPherson who married my mother's younger brother, Billy Stutler. I don't recall which of my grandmother Edith Skinner Stutler's sisters was the clever task master, but she would have been a neighbor of Aunt Pat's, and not a relative.