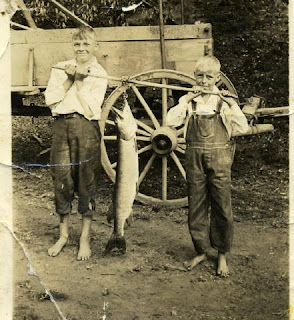 To the right is a photo from the early 1930s with Nelson and Stanley Mitchell (Homer and Lula (Henline) Mitchell 's boys) showing a fish they caught in Oil Creek.

This photo was a surprise to me because, since Oil Creek sometimes drys up, I didn't think fish would live there. David and Barbara (Jeffries) Parmer assure me that is not the case.

David says, "I have fished Oil Creek many times particularly when my in laws still owned the farm on Oil Creek above Orlando. I often fished Oil Creek right in Orlando and had good luck each time I fished it. You would be surprised what you can catch from such a little creek. I recall fishing one night by the light of a burning tire on Oil Creek and caught several catfish and assorted other fish. At the bend in Oil Creek just past the trestle I caught a bass which was perhaps 17 inches long. I considered fishing a great success that day. "

In an earlier entry about Heater Henline Barbara (Jeffries) Parmer remembered "on heat-shimmery summer afternoons he'd take his fishing pole in hand and say “Think I’ll go up the crick”. After awhile, he would return with what he called “a mess of fish”—suckers and “baccer boxes1”—which my aunt or grandmother would fix for breakfast the next day.

Dave Hyre also remembers fishing on Oil Creek. "My first fishing experience was along Oil Creek a Burnsville, I loved it! I had no reel, just a thin bamboo pole with a stung line, hook, and plastic bobber. Bait was worms. Murky water, but the excitement of that bamboo pole bending to the tug of a bite was magic. Cat fish and "bacca boxes" were a typical day's excitment.

1. Sunfish were called "baccer boxs" because there are about the size of a tobacco box. See the entry on March 12 '06 Prince Albert in the Can