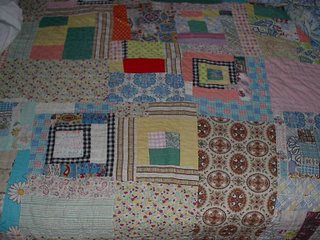 Cotton sacks printed with designs to appeal to the homemaker came into their own in the depression, the 1930s. Housewives were already using the material of the cotton sacks that flour, seed, animal feed came in. Historians tell us the soft, sturdy fabric, white or unbleached and often with the company's logo inked on it, was readily used for

"boy's underpants, children’s clothing, aprons, dresses and everything else imaginable." Fabric from the plain sacks, some with company logos printed on them, sometimes turn up as the backing on old quilts. The colorful cotton sacking material quickly became a fixture in American culture through the 1950s. Today, patterns of vintage feedsacks are being reproduced, primarily for quilters seeking that authentic depression look.
This crazy quilt (above, right) by Mae (Posey) Strader, daughter of "Flukey" and Mina Posey, (left) may well be entirely feedsck material. It contains several recognizable feedsack designs.
For more about the farm where Mae (Posey) Strader was raised see the Mar '07 entry Flukey Posey – Baritone, Sheep Shearer & More

Sharon (Rogers) Jeffries, who grew up on Butcher’s Fork, west of Orlando, recalled that her mother made sheets of feed sacks. Although a little rough when first used, the sheets became more comfortable with repeated washings. Sharon also recalls that when the center of a sheet became threadbare, her mother would cut out the center section and would sew the relatively unused sides together to form a “new” sheet. Farm families have always been resourceful.

.
Donna (Witzgall) Gloff remembers, "When grandma judged me responsible enough to get the fabric pattern she needed and strong enough to carry the sack, she began sending me to pick up chicken feed for her at the Browns' warehouse. She would show me the fabric pattern she needed to finish her current project and tell me to be sure to get a sack with that pattern. (The Browns' general store was very small, so big things, like watermelons and sacks of feed, were kept across the road in the warehouse.)" 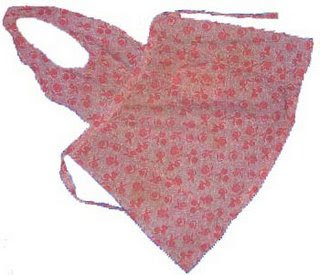 Sandy (Burgett) Conrad sends this photo of her grandmother's, Edith (Skinner) Stutler's, feedsack apron. It is an heirloom Sandy cherishes.

To the left, Edith (Skinner) Stutler, to the right is one of her many aprons.

For more about feedsack fabric, see Joan Kiplinger at
http://www.fabrics.net/joan301.asp
Note:
In our memory of the Oil Creek watershed, we so far have the remembrances in this article, a few of the actual items like quilts, aprons, and hazy memories of clothes made from cotton sacks. For general information about household use of cotton sacks, we checked with Joan Kiplinger at http://www.fabrics.net/joan301.asp. Speaking generally,

"Some bags came ready for sewing with doll patterns printed on one side or sewn-in drawstrings that when one seam was ripped produced an instant apron; others were specifically printed for pillow cases or curtains. Pattern companies issued appealing booklets about sewing attractive garments and caring for sack fabric. A 1942 estimate showed that 3 million women and children of all income levels were wearing print feedbag garments." We have never seen booklets like these two from Joan Kiplinger's site.