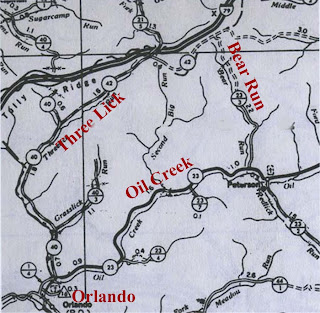 by David Parmer
Bear Run is a tributary of Oil Creek, approximately three miles northeast of Orlando. Bear Run is a small watershed on the southern slope of Rush Knob and just over the ridge from Goosepen Run and the head of Three Lick Run. The small creek heads approximately two and a half miles from its mouth on Oil Creek, just west of Peterson. The narrow valley of Bear Run is unremarkable, with steep hills on either side of the run, with little bottom land. In older days a road or path went over the hill from the head of the hollow to the Goosepen and Three Lick Run side of the hill.

In 1932, the family of Philip Sheridan Atkinson, known as “Sherd”, and his wife, Fannie (Riffle) Atkinson, the daughter of Ezekiel and Jennie (Harris) Riffle, were eking out a living on Bear Run. The Atkinson family lived in a small shack less than halfway up Bear Run on the left side of the branch. The Atkinsons had one child, a daughter, Mary Agnes.
Prior to moving to Bear Run, the Atkinson family had lived for four or five years on the Ryan place at the head of Three Lick Run. The Bear Run farm was just over the hill to the east from the Ryan place on Three Lick.
Farming on Bear Run was marginal at best when the land was farmed in the early days. A common expression about Bear Run among early inhabitants was “there isn’t much there worth having.” Whatever the case, in 1932, times were hard; “there was no work, little food, and people had to live the best they could.” 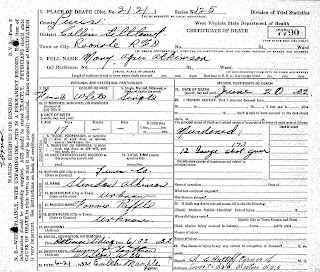 Mary Agnes Atkinson had attended the Goosepen School for four or five years prior to moving to Bear Run. Tom Pumphrey, now eighty four years of age, recalls Mary Agnes as slender, nice looking girl with long black hair. She was in the eighth grade while Tom was a second grader. Tom was interested in Mary Agnes because their mothers were friends. Tom reckons that when the Atkinson family moved from Ryan’s place at the head of Three Lick to Bear Run, Mary was about fifteen years old.
Double click on the death certificates of Mary Atkinson and Earl Marsh to enlarge them.

The next time Tom Pumphrey saw Mary, she and an older man named Earl Marsh who also lived on Bear Run came to visit Pumphrey’s mother at Goosepen. The couple came on foot and had walked over the mountain from Bear Run. The visit caused considerable discussion after they had left, focusing primarily on whether the couple was married. Since there was no confirmation by Mary or Marsh that they were married, the Pumphrey household naturally concluded that they were not.

Ruby (Riffle) Hitt lived with her mother Polly Riffle three houses up the creek from the Atkinson family. Ruby was eight years of age in 1932 and knew Mary Atkinson well. “Mary was a beautiful girl,” recalls Ruby. Ruby also knew Earl Marsh, whom she knew as “Ernest.” Marsh was “batching in a shack, owned by the Brinkleys, two places down the creek from the Atkinsons,” said Ruby. 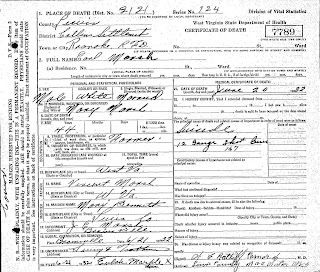 insanely jealous of her. It was clear that trouble was brewing because Mary would not agree to marry Marsh. Marsh had made his brags that “if he couldn’t have her, no one else could.” Marsh had made this threat to Mary and others on the creek. Mary had related the threat to her mother.

Marsh’s irrational intolerance grew day by day. On June 20, 1932 , he went to his neighbor Jarrett Fox, who lived between Marsh and the Atkinsons, and borrowed two 12 gauge shotgun shells and went up the road toward the Atkinson home.

Mary and her mother and father were on the hill, perhaps 300 or 400 feet behind and above the Atkinson home, hoeing corn in the corn field. It was a hot day. Mary told her mother that she was going to take a break and sit under a large chestnut tree at the edge of the corn field. Fannie and Sherd Atkinson continued to hoe their rows of corn but shortly were startled by a shotgun blast. Turning, Fannie saw Earl Marsh running down the hill toward the road at the bottom of the hill and saw her daughter Mary, bloodied and lifeless under the chestnut tree.

Earl Marsh, carrying a twelve gauge shotgun, reached the road at the bottom of the hill and came upon an elderly man named Posey. Marsh blurted out to Posey. “I just shot Mary.” Posey was speechless and dumbfounded by what he had just heard. Marsh put the barrel of the shotgun in his mouth and stood motionless for several minutes and then finally squeezed the trigger.

Mary’s funeral was held in the yard at her home. Neighbors from Bear Run and a few others were present. Tom Pumphrey attended the funeral with his mother. Ruby Riffle Hitt was also at the funeral with her mother, Polly. Mary, who had just turned seventeen, was laid to rest in the Peterson Community Cemetery on Oil Creek.

Ruby Riffle Hitt notes that Fannie Atkinson took the murder of her daughter very hard and was never the same afterward. Ruby says, “Fannie went crazy. She was always hearing music. One day she was in my house and all of a sudden jumped up and started dancing and said, “That’s the purtiest music I ever heared.”

Today, Bear Run is mostly wooded with third and fourth growth timber and is dotted with house trailers. The memory of the tragic events of 1932 and the beautiful Mary Agnes is unknown or all but erased from the minds of current residents of Bear Run.
“Murder and Suicide Affected by Fanatic.”
On June 24, 1932 , the headline of the Weston Independent newspaper recounting the brutal murder of Mary Agnes Atkinson, read “Murder and Suicide Affected by Fanatic.”

The news article recounted that the murderer, Earl Marsh, was married to another woman named Mary, and not the Mary Agnes Atkinson that he murdered. The article also revealed that in 1927, Marsh had been arrested for dynamiting the home of Clark Humphrey, and in 1928 had been indicted for statutory rape of his fourteen year old daughter and the felony murder of his new-born child in 1922. His lawful wife, Mary Marsh, testified that Marsh had struck the new-born child in the face with his fist because he did not think the child was his. Marsh was never tried for the murder of his child but he was convicted of the rape of his daughter and served a short sentence in the penitentiary. He was released early and put on probation because of doubts of his sanity.

Marsh left a “suicide” letter blaming his dastardly deed of murdering Mary Agnes Atkinson on Sherd Atkinson, supposedly for preventing Marsh from seeing Mary Agnes. Sherd Atkinson had earlier requested a restraining order against Marsh because of death threats made by Marsh against Atkinson. In the suicide letter, Marsh referenced bank accounts in Weston banks in which he claimed to have a sizable amount of money. Actually, Marsh had no bank accounts and they were a fiction of his deluded mind. Marsh also claimed that Mary Agnes Atkinson was his “common law” wife which appeared to be another fabrication of his demented state. Marsh even had the audacity, in his suicide letter, to request that his victim be buried with him, in the same grave.
Marsh was doing farm work for Harry Miller of Bear Run at the time of the murder
Comment from David Parmer
In 1932, Bear Run was relatively well settled. At the head of the hollow lived Jarrett Freeman. Proceeding down the creek on small farmsteads lived Henry Posey, Pat McDonald, Addison Puffenbarger, Polly Riffle, Harry Miller, Junior Fox, Sherd and Fannie Atkinson, a Kerns family lived on a small branch flowing into Bear Run from the north, opposite the Atkinson farm, and continuing down Bear Run lived Jarrett Fox, and Earl Marsh. An elderly lady named Becky Fox lived in an old log home at the mouth of Bear Run on Oil Creek.