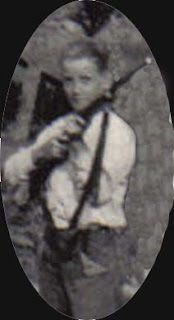 In the Braxton Democrat on October 18, 1934 Uncle Zele reported in his column the "Buzzardtown News":

"We have been informed by Grant Ptomey that little eight year old Junior Hawkins, son of Mr. and Mrs. Oscar Hawkins of Dumpling Run, has a little target gun of which he is very proud, and is a crack shot for a boy so young. My informant says the boy was called recently to shoot a copperhead which had been found by some of the family. In order to make sure work he placed the gun so close to the snake that the snake bit the gun just as the shot was fired. Grant says the gun swelled so big that it took the boy and his mother both to carry the gun to the house, and ever since he has used 16 gauge shotgun shells instead of number 22 cartridges." 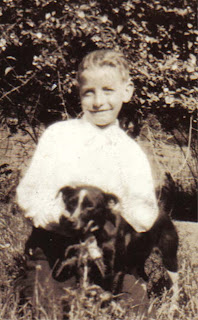 .
To the left is Junior Hawkins with his shotgun.
To the right is Junior with a future hunting dog.

Junior Hawkins was the grandson of Clint and Martha Mick who llived on Dumpling Run. Their daughter Bernice had married Oscar Hawkins and they lived near by on Oil Creek.
For more on the Mick family see the Nov '07 entry Mrs. C. C. Mick's 88th Birthday

In the 1930s Junior's family lived near Oras and Edith (Skinner) Stutler. Junior Hawkins married a little girl he grew up with, Wanda Jane "Jane" Stutler and like most of their generation, they left Orlando. They moved to Detroit about 1950, where they raised their three children. Junior had grown up to be a kind and gentle man. On the other hand, his wife Jane was a firecracker. She was bold and she loved to party. Yet, they seemed to be a good pair. Junior had a stroke which led to a very early retirement. As devastating as that was, it did allow Jane and Junior to move back home. In the 1960s the family purchased the Allman house next to Jane's parents, Oras and Edith (Skinner) Stutler who, in the late 1940s, had made the former Dolan Hotel their home. (The Hawkins family is mentioned in the Oct '07 entry Gaver Hamilton Allman: Telegrapher and Freight Agent )

To the left is Junior Hawkins' high school photo.
On the left below are Junior and his sister Thelma Hawkins with their shotguns.
On the right is Junior's future bride, Jane Stutler. 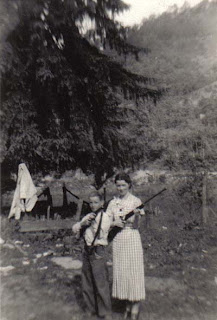 A copperhead snake is shown to the right