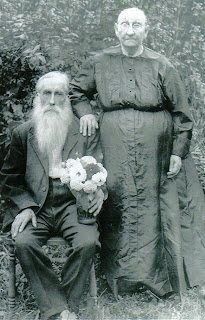 "There was a birthday dinner at the home of Mr. and Mrs. C. C. Mick on Dumpling Run October the 10th in honor of Mrs. Mick’s 88th birthday. About two hundred were present and a real sociable day was enjoyed by all. Games were played in the afternoon while some engaged in a little "Join hands and circle to the left." James and Charles Henline of our town furnished the music. We wish Mrs. Mick future happiness and health to enjoy many more birthdays."
- Reported by Uncle Zeke in his October 18, 1934 Buzzardtown News column.

Clint and Martha (Lawman) Mick are pictured to the left.

Martha Wyatt Lawman was born October 10, 1846 to Bernard and Permeillia (Campbell) Lawman. The family moved from central Virginia to Upshur Co in western Virginia in 1861. They settled at the head of Rovers Run, which is near Berlin in Lewis County. Like his father and grandfather, Bernard Lawman was a tanner and farmer. He fought with the Confederate army.

he was born in 1848. If so, the war was over when he was 16 years old and he married at the age of 17. They raised their children on Dumpling Run, a creek that joins Oil Creek just before it meets the Little Kanawha. Although it is much closer to Burnsville than to downtown Orlando (evidenced by who their children married, and Uncle Zeke's acknowlegement), they were part of the Posey Run community.

Clint's brother Solomon and Martha's sister Mary married and lived close by, across the county line in Gilmer County. Researchers say that Solomon fought for the Union.

The advancing years were probably difficult for the couple, as, according to their death certificates, doctors noted symptoms of senility in both. Martha died January 22, 1936 at the age of 88. Clint died less than three months later, April 12, 1936.

Music makers at Mrs. Mick's celebration, Jimmy and Charlie Henline, are pictured at the right. Their music making is discussed in the June '07 entry The Buzzardtown Tongue Twisters