Visitors to the Dolan Hotel 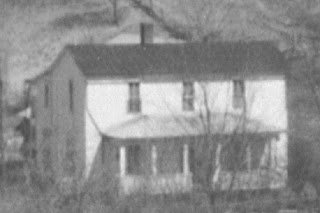 Four hotels operated in Orlando. The one that is best remembered is the Dolan Hotel. The Dolan Hotel, located first near St Michael's Church, and later on the north side of downtown Orlando, was in operation from at least 1919 until 1941 by children of Irish immigrants Patrick and Elizabeth (Farrell) Dolan. The Dolan family is discussed in the Nov. '07 entry The Dolan Hotel of Orlando.
This photo of the Dolan Hotel was taken about 15 years after it closed as a hotel and was serving again as a private home.

Who Stayed at the Dolan Hotel?
The Dolan Hotel was a rooming house, a respit for commuters and a convenient choice for travelers. Folks who knew the hotel "back in the day" remember it even provided informal hospitality for the depression era tramps who road the rails.

Roomers
Some Orlando folks lived at the hotel, like a rooming house. A young Presley Bragg, for one, roomed at the Dolan Hotel before he married Jessie Riffle and built a home on Clover Fork.
To the left is Pres Bragg, many years later, at his retirement party.

Work teams were put up at the Dolan Hotel when they were temporarily working nearby. Workers for the power company who were electrifying Orlando and the surrounding countryside, telephone company workers when they were

installing telephone lines through Orlando in 1929, railroaders and oil and gas field workers who were too far from home to commute also stayed at the hotel. At least one worker got more that a clean, hospitable place to stay and good meals. Perry Francis, a native of Pensylvania, working as a driller in the oil fields around Orlando lodged at the hotel. There, he met his future wife, Bridget Dolan, a younger sister of the Dolan sisters. Perry Francis is to the right.

School groups, like the basketball teams of Elkins High School and Broaddus College in Philippi, found the hotel a convenient layover on their trips. Among the Elkins High School players who stayed at the Dolan Hotel was Marshall “Little Sleepy” Glenn, who later starred in basketball at West Virginia University as a player and later as coach.
Marshal Glenn in later years is pictured at the right.
.
Commuters
~Father Quirk, the priest who served St. Michael’s Church, would ride to Orlando on his horse on Saturday, stable his horse in the Dolan barn, spend the night at the hotel, conduct services at t 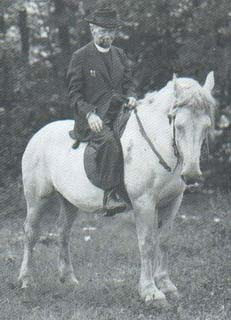 he church on Sunday, have lunch at the hotel, or at the home of a Catholic family, and ride back to the rectory at Loveberry on Sunday afternoon. After Father Quirk became a little too old to ride his horse from Loveberry to Orlando, Bern Dolan, brother of the Dolan sisters, would drive his Model T Ford to Loveberry and chauffeur the Father to Orlando and back after the church service.
Fr. Quirk on his horse is to the left.

~ Evelyn and Eleanor Arnold, sisters who taught at the Orlando School in the mid-1920s, stayed there. Teachers, who lived as close as Burnsville and who would normally commute, found lodging at the Dolan Hotel when weather was inclement and traveling was difficult.

~ Bessie (Boyd) Bell, dean of women at Glenville State College during the mid 1900s. The guest register lists many visitors like her who lived not far away, in Gassaway or Glennville.
.
Travelers
The Dolan Hotel's register also lists business and pleasure travelers, guests from Ireland, London, England, Australia, and China, and from major cities throughout the United States, such as New York City, San Francisco, Boston, Philadelphia, Chicago, Pittsburgh, Milwaukee, Detroit, Cincinnati, Louisville, and New Orleans.

Some are listed here, others are in the Nov. '07 entry
Notable Traveling Guests of the Dolan Hotel

~ Congressman John Wolverton from Richwood was a guest at the Dolan Hotel, as was William Chilton, U. S. Senator and publisher of the Charleston Gazette.
William Chilton is at the right.

~ E. A. Prosser of New Jersey was a member of the U. S. government's Chemicals Division during and after WW I. After the war he was named Chief of the Division's department that was resposible for tanning materials.
There was a dynamite plant at Nitro, near Charleston, during WW I and my guess is that was where he was going. From New Jersey by train, he would have taken the Pa. R. R. to Pittsburgh or Baltimore, then south to Grafton and Orlando, and he would have had to change trains at Orlando to catch the Coal and Coke to Charleston

~ A well-known men's four part harmony quartet of the 1920’s, the “4” Embers, also enjoyed the hospitality of the Dolan Hotel.

Most travelers who stopped in Orlando came by train, but apparently not all. In 1922 the hotel registry shows "M. Jedel and Driver" of Newark, N. J. He must have come by automobile.

Here are three pages from the Dolan Hotel Registry. On the left, notice at the top a guest from Australia. The page in the center shows a guest from London, England. The page on the right shows guests from Limrick, Cork and Dublin Bay, Ireland. 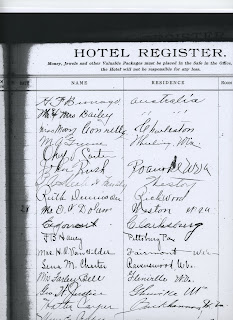 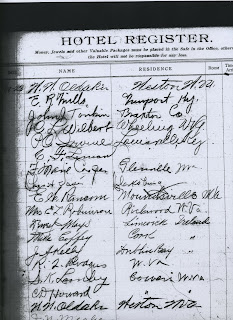 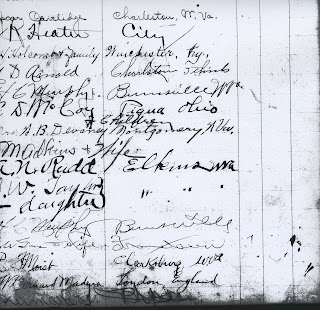 even Tramps
Tramps, hobos, rode the rails all over the United States during the Great Depression partially from frustration but also in the spirit of adventure. Meaningful work was available to only a few. Railroad towns without law enforcement like Orlando, saw many hobos hop off the trains to look for a meal. Mary Margaret (Francis) Yahn recalls that on many mornings, the porch swings of the Dolan Hotel would be occupied by hobos who had spent the night. The hobos would leave the next morning in time to catch the next freight, but only after begging a sandwich from the
Dolan sisters.
.
.
and of course, 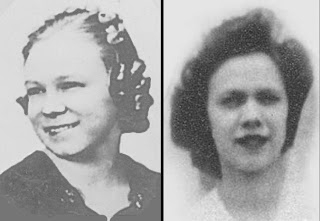 Family
More personally, the Dolan girls also found space for family when it was needed. After their mom Bridgit (Dolan) Francis died, their aunts took in Betty and Mary Margaret and they lived at the hotel. So did their cousin Bernatte Dolan, from time to time after her mom, Grace (Shepherd) Dolan died.
Betty and Mary Margaret Francis are on the left, Bernadette Dolan is to the right.
. . . . .
Thanks to the following people who supplied the information in this entry.
daughters of Bridget (Dolan) Francis,
. . Betty (Francis) Rainer
. . Mary Margaret (Francis) Yahn
Juanita (Bennett) Buchanan, the daughter of Dave and Macel (Parmer) Bennett, who grew up directly across the tracks from the hotel. 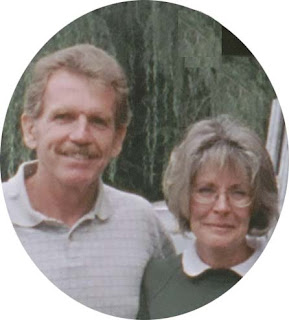 Also, we have access to the guest register for the years from 1919 to 1930, thanks to is current owner Oscar Hawkins.
To the left is Oscar and wife Mickey Hawkins.