The Rushes From County Roscommon

In the mid 19th century, the Orlando area had the good fortune to be the settling place of many families of Irish immigrants. The potato famine of Ireland and the continuing problems of concentrated

land ownership in the hands of a few aristocratic families sent struggling Irish families to the land of hope in the 1840s and 1850s. Many of those families found their way to the Orlando area, and principally to southern Lewis County. These Irish families were hard working, very family-oriented and blended in well with the original settlers of the area. The only distinctive feature of these later arriving immigrants was their Roman Catholic religion which they practiced faithfully.
To the left is a map of Ireland showing County Roscommon in bright green. To the right is a map of County Roscommon in Ireland showing the parish of Kilbride is gray and the parish of Kilgofin is black. County Roscommon is about three times the size of Lewis County.
Andrew and Abalena (Gillooly) Rush
One of the Irish families which adopted southwest Lewis County area as their new home was the family of Andrew "Andy" Rush (1816-1874) and his wife Abalena “Abby” (Gillooly) Rush (1825-1898). Andrew was a native of Kilbride in County Roscommon and his wife was a native of Kilgofin, also of County Roscommon. Andrew and Abalena Rush became the parents of nine children in their Lewis County home: John, born in 1854; Mary, born in 1856; Margaret, born 1858; Peter, born 1860; Elizabeth “Eliza”, born 1861; Bridget, born 1862; Michael, born 1864; Ella, born 1866; and Patrick, born 1873. At the time of the 1860 census there was another child in the household, seven year old Owen Riley.
~ Mary, the oldest daughter of Andrew and Abalena Rush married William McGann of Weston where they made their home.
~ Margaret and Ella married half-brothers Michael Kraus and Bernard L. Kraus. Michael's occupation was "farm laborer" and Bernard's was "school teacher". The Kraus family was centered at Alum Creek, in the Roman Catholic parish of St. Boniface. The two Kraus families lived for a short time in Orlando and operated the former Rush Hotel. They later returned to the Alum Bridge area of Lewis County.
~ Bridget married Patrick Feeney of Three Lick, the son of Michael and Margaret (Tulley) Feeney. Patrick was a farmer and their farm was in the Orlando area, on Three Lick.
~ Elizabeth, the third daughter of Andrew and Abalena, married William Peter Cox. They lived in Weston.
~ John, the oldest child of Andrew and Abalena Rush, was a farmer on Indian Fork and married Ellen Gillooly. In 1918, when John was in his seveties he and Ellen sold their farm to H. H. Robey and moved into Weston. John died in 1928.
~ Peter, born in 1860, was a farmer on Goosepen and married Anna 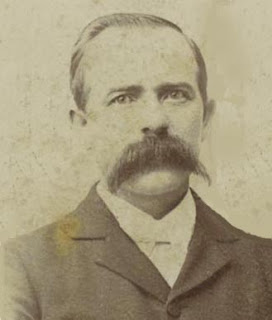 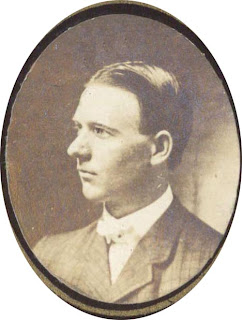 ~ Patrick, the youngest of Andy and Abby's children, died at the age of 38.
Michael is to the left, Patrick is to the right.
~ Michael, the second son of Andrew and Abalena Rush, in 1892 married Elizabeth Farrell, the daughter of Peter and Anna (Cuff) Farrell of Rocky Fork. Michael and Elizabeth were the parents of eight children who born in Orlando, namely Andrew, Peter, Abalena, Anna, Helena, Gertrude, Bertha, and Marie. Michael was an entrepenur who invested in the growing town of Confluence. The family of Michael and Elizabeth (Farrell) Rush is discussed in the Mar '08 entry Michael Rush's Family & the Rush Hotel
.
.
Comments
comment 1
The photo of Patrick Rush was taken from this funeral card.