More Memories Of My Grandpa Godfrey 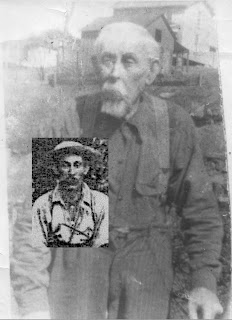 by Pat Reckart
My Grandpa was Thomas Jackson Godfrey. He was born July 31, 1866. His parents were David Newton Godfrey and Mary Jane (Skinner) Godfrey. (I’ll have a story about them at a later time.) Grandpa was the fourth child. He had three older sisters. Grandpa lived in the Orlando area all his life. He married my Grandma Bridgett September 17, 1891. He was 24 and she was 17. They had eleven children: Maude, Mary, Lena, Gertie, Minnie, Wilda, Agnes, Ruth. Guy, Robert, and Edward. Gee that’s a lot of kids. As far as I know all the kids were born on Three Lick. They moved to Orlando in 1918, my Mom (Ruth or "Nellie" as everyone knew her) was two years old. They moved into a house that was behind the Catholic Church. Grandma bought it from Mike Moran for the total of $500.00. Mike had paid $4.00 for it for unpaid taxes; I don’t who owned it then. But I do know it has been in our family since 1918. 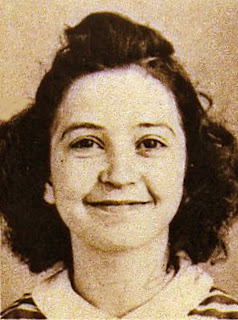 rt: Two photos of Tom Godfrey, Pat's grandpa
lt: Pat (Morrison) Reckart
rt, below: Tom Godfrey's parents David Newton and Mary Jane (Skinner) Godfrey
My Grandpa was 68 when I was born and I was born in that house in 1934. Grandpa always seemed old to me, so when I was 64 I 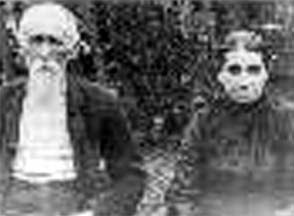 wondered if my grandkids thought I was old. I sure hope not. Grandpa was not a very big man. He was probably 5 foot 3 or 4 inches tall and weighed about 125 pounds, but I always thought of him as a big man. I sure do treasure the years I grew up with him. He was like a Dad to me so since Fathers Day is coming up I wanted share with you some of the special memories I have of my Grandpa.
Halloween Fright
One of the times I remember the year was about 1938. I was 4 years old and my brother was just a baby. It was October and Halloween Night since I was only four I didn’t know what "trick or treat" was. We had just finished supper and it was getting dark. Grandma was getting ready to the dishes. Grandpa sat down to smoke his pipe and I was sitting on his lap and just then we heard a knock on the door. Grandpa said, "Who could be coming this time of night?" So he got up to answer the door with me right behind him. When he opened the door there was a bunch of kid standing there in all kinds of costumes, yelling "trick or treat, trick or treat!" I didn’t know what was going on so I started screaming. When Grandpa saw that I was scared to death, he yelled at them to get the h--- out or he would shoot their a---- full of buckshot. Well, out of there they ran and in their hurry they fell over the swing that was in the yard. When Grandpa shut the door and turned around he was smiling and he said “I bet they won’t come here again” and I said “Grandpa would you really shoot them?” and he said “Child I don’t even have a gun. I just looked at him and said,” Grandpa I love you."
Taking Care Of Grandpa 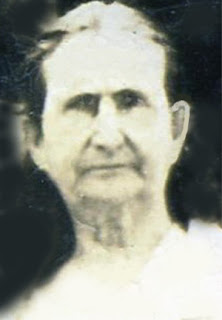 I think I was in the fifth grade and Grandma had gone to Ohio and Grandpa missed her so much. He just couldn’t stand for her to be away from him and he said to me, "If Bridgett don’t come back pretty soon I’m going to die." And I said “ Grandpa don’t worry I’ll take of you. The next day at school It was about lunch time and I told my teacher I had to leave early. She wanted to know why and I said “My Grandma is in Ohio and I have to go early so I can make coffee for my Grandpa." So she let me go early, we only lived down over the hill from the school. When I got home Grandpa was laying down, so went ahead and made coffee for him. Grandma had made a lot of biscuits ahead and put them in the cupboard so I got them out and put them in a bowl on the table. We had some tomatoes so I sliced them for him. I got his plate and his knife and fork and his cup and saucer and then I went and woke him up and I said, "Grandpa your dinner is ready." Grandpa had a special knife and fork that he ate with and when he started to eat his tomatoes he would hold his fork over them and then take his knife and sprinkle sugar over them. And when he drank his coffee he poured it in his saucer, or "sasser" he called it. One of the other words I remember was poison, he called it "pisen". I wish I could remember all the

different words he used and all the different sayings.
lt above: Bridgett (Heater) Godfrey, Tom's wife
lt: Tom and Bridgett Godfrey's daughter and Pat's mother, Ruth "Nellie" (Godfrey) Morrison Hopkins, at an early age
The Little House on Oil Creek
As I said we lived in the house behind the Catholic church and in the winter time it was so cold. It was just a three room house and it was heated by a big Burnside stove. When my brother and I got bigger it was our job to bring the coal in at night. My grandpa had a wood yard where he would chop up wood to make kindling so it would be easy to start the fire if it went out, and he would take some of the wood and shave it to help start the fire.
Sometimes in the winter time when it was too cold to get outside, my brother and I would play with the kindling wood making hog pens or just stack it up to see how far we could stack it. Boy, if Grandpa was living today he wouldn’t know what to think when it was cold and the wind was blowing or it was pouring down the snow. All he would have to do would be just turn up the heat from a little gadget on the wall. Good night grandpa.
Comment 1

the author, Pat Reckart, recalls that one of the trick-or-treaters was Mary Margaret, who lived at the Dolan Hotel. That would be Mary Margaret Francis. See the Nov '07 entry The Dolan Family to get the story on why she and her sister were lving with their aunts Mary and Jo.
rt: Mary Margaret Dolan