Orlando's Warehouse was originally a three story structure built for the Orlando Fruit and Produce Company around 1907. It was owned for half a century by Mike Moran. The Warehouse has housed many activites over the decades:
. . . ~ U. S. Post Office,
. . . ~ farm machinery business
. . . ~ Overland auto dealership
. . . ~ restaurant,
. . . ~ mortician's office,
. . . ~ informal gathering place for the community,
. . . ~ warehouse.
And, in the 1910s it also served as a social hall. If those walls could talk!
The Burnsville Enterprise issue of September 11, 1913 reported that
“A large number of our young people attended the dance at Orlando on Saturday night.” 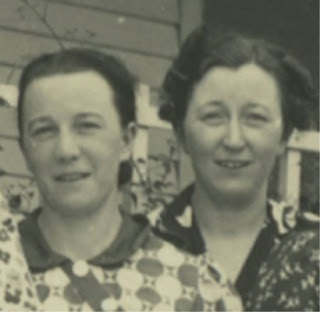 Gertrude Rush, whose family lived up Three Lick and owned the Rush Hotel, remembered the good times so fondly the younger generation remembers to this day her stories about the weekend dances. See the March '08 entry Michael Rush's Family
Right: Gertrude Rush (lt) and her twin Bertha.

Likewise, Bee Heater's grandchildren still laugh about the story of their tipsey grandpa with Mike Moran in the building's elevator on a Saturday night.

We know it was used for more serious matters, too, because the September 27, 1913 issue of the Burnsville Enterprise announced:

Church. This will take place in the Moran Club Hall, opposite the Union depot. The doors will be thrown open at noon at that day and closed at midnight. During that period dancing will be held on the second floor while all kinds of refreshments are served on the lower floor. Outdoor sports commencing at 3:30 p.m.: One hundred yard dash, boys under sixteen, prize given by M. V. Moran and Company; Climbing the Greasy pole, free for all, prize given by Dolan House; Stand-hop-step and jump, boys under eighteen, prize given by Central Hotel; Sack race, boys under fifteen, prize given by J. B. Dolan and C. F. Moran; Prettiest horse on the grounds, purse made up that day. After the outdoor sports are over, the doors will be thrown open for supper and closed at eight o’clock p.m. All are cordially invited to come early, stay late and help to make this a success.

Church was located on the bluff (Flint Knob) overlooking Orlando. Built of frame construction in 1907, the church was located well out of the area of flooding that chronically plagued the Oil Creek Valley. Struck by lightning, this original church burned to the ground in 1915. It was re-built, using brick, along the Coal and Coke Railroad right of way, in the lower area of Orlando. 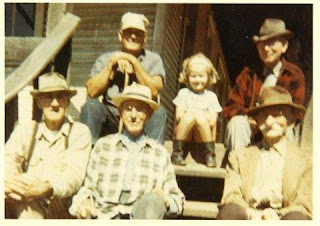 In the 1950s and '60s the porch of the post office, in the shade on the west side, was the the old men gathered. Here, one afternoon's group poses for the camera.