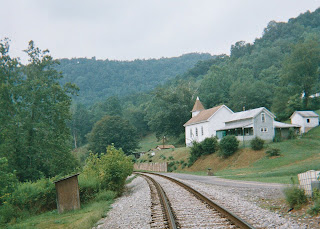 by Patsy Reckart
The hills were alive with laughter and music on Saturday, August 2, when families and friends gathered together for the second Orlando Reunion. It was held the same place as last year, behind the Orlando Baptist Church which was formerly the St. Michaels Catholic Church, the property behind the church was the former Tom Godfrey property now belonging to his grand daughter, Pat Reckart, this property has been in the Godfrey family since 1918. 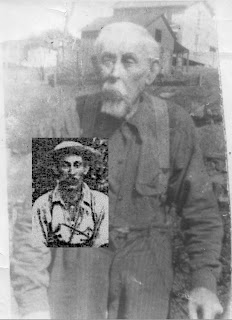 Left: Tom Godfrey, young and old.
Right, the Methodist Church, looking down the tracks from the Godfrey farm
It takes a lot of hard work in putting together a reunion started and we hope to see it go and grow for years to come, I don’t the number of the attendance but I would guess somewhere between 80 or 90, There were people there that was not there last year so that means the word is getting out about the reunion, so next year we hope to see more new faces.
George Blake welcomed every one and Pat read a poem called THIS LAND OF OURS. It was a poem she had written when her brother was in Viet Nam and she asked that everyone remember all the men in service and the ones who lost their lives fighting for you and me, following the Pledge of Allegiance, the blessing was given for all the bountiful food that was piled high on the tables. I always worry that their won’t be enough food and then I remember the story in the Bible where Jesus fed the crowd with seven loaves of bread and a few fish, there was enough for everyone and lots left over, so it was with us there was plenty of food and lots left over.
After lunch there was a short History of Orlando Community given by Donna Gloff of Michigan. She is the grand daughter of Oras and Edith (Skinner) Stutler, she is also the web master for the orlandostonesoup site on your computer, where you can read lots of history and stories about Orlando.
George introduced Peggy (Donaldson) Smith who is running for the House of Delegates. He also introduced the current officers.
Right: from the 2007 reunion, George Bard, Helen Jeffries, Charles Jeffries, Mary Ables Curtis, Mildred Morrison McNemar.
An election was then held to elect officers for the coming year of 2009, and they are President Marilyn Posey, Vice President Dochie Wymer, Secretary Betty Stout, Treasure and Historian Pat Reckart, Entertainment Marilyn Posey, and board members are John Jeffries, Sonny Wymer, Jerry Wilson, Ann Wiley, and Charlie Cole.
All the business being take of, now it was time for some fun. An auction was held with lots and lots of items auctioned off, Its always fun to have an auction and bidding against your friends just for fun whether its something you want or not. Some of the items sold was a throw quilt made by Doris (Riffle) Snyder, a crock pot donated by Peggy Smith, there were lots of glasses, crafts and candy and much much more, there was also a free will offering in which a good amount was received and the money received will go for expenses for the reunion in 2009. 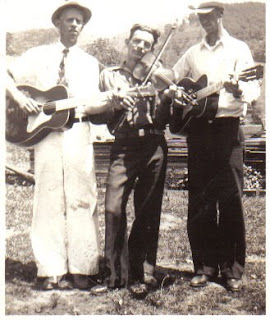 The meeting was then turned over to the Slim Quinton Blue Grass Gospel Band, who entertained the crowd with their wonderful music, getting wound up in the music Pat and Marilyn showed the crowd they were not to old to kick up their heels a little bit.
Left: Marilyn's dad Harold Quinton Cole (left) and Charlie's dad Elzie "Slim" Cole (right), with their nephew Clarence Dolan on fiddle.
Marilyn (Cole) Posey and Charlie Cole make up the Slim Quinton Band and they both have roots in Orlando Marilyn is the great granddaughter of Aunt Duck (Lorraine) Bee and the grand daughter of Jim and Alta Bee and the daughter of Harold and Mary Lee (Bee) Cole. Charlie’s parents were Alvin and Elda (Lucas) Cole. Dock Blake joined in with them playing several numbers, Dock is also a former Orlando resident, his parents were Marian and Ethel Blake.
When the day was over everyone said they had a wonderful time and they would see us next year and I might add plans are already being made for the 2009 reunion.