The Holbert Children on Clover Fork

Abia Holbert was one of the first of many young men to come to the Confluence (later Orlando) area, beginning about the turn of the 20th century and marry a local girl, becoming part of the fabric of the community. The young men came to find work as the industrial revolution rolled in on locomotive wheels. Abia came down from Marion County, in the Fairmont area. His first wife Pearlie Summers died, leaving him with a daughter, Lenna. He married a local girl, Margaret Etta Cunningham who was the granddaughter of Bulltown area pioneers Jesse and Mary Cunningham. Abia and Etta had four more children, Fred, Mary, Della and Robert. Abia and Etta also had a foster daughter, Nina Smarr, who is the only present survivor.
.
by David Parmer
.
The life of Abia and Margaret Etta (Cunningham) Holbert was the subject of the Jan 4, '08 entry The Holberts of Clover Fork. Here are stories of their six children. 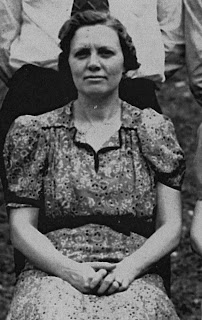 Lenna
Lenna Holbert was a school teacher until she married in 1928 at age 32, Reverend Ellis Rittenhouse, a widower twenty four years her senior. Lenna and Ellis had one child, a son named Charles, who was born in Wheeling in 1937.
Fred
Fred Holbert, the second child of Abia and Etta Holbert, graduated from West Virginia University in 1928 and became a teacher of Vocational Agriculture at Buckhannon-Upshur High School. After teaching at the Upshur County school for six years, Fred became the agricultural agent for Gilmer County. After serving two years as agent, Fred died at Mercy Hospital in Baltimore of complications from surgery at the age of thirty two.
Mary 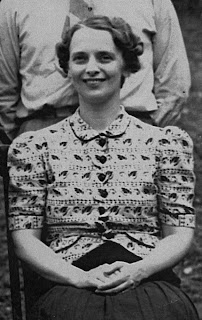 Mary Holbert married Russell Ellyson of Gilmer County in 1926. Mary had taught school, at, among other places, the upper Clover Fork school 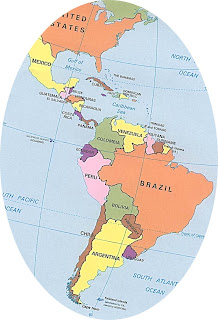 which she had attended as a child. Mary was the author of three books, one of which, Mud and Money, is a book about the oil and gas exploration business in turn of the century Gilmer County. Mary’s husband Russell was State Rehabilitation Director and also an advisor for the United States Department of Agriculture. Russell and Mary traveled to and lived in South America and Central America in connection with Russell’s employment as an agricultural advisor.
.
Sisters Mary and Della, on Della's wedding day.
From the left: Ray Harris, brother of the groom, the groom Stanley Harris. (He was later the principal at the School for the Deaf and Blind at Romney and Registrar at West Virginia University) the bride Della (Holbert) Harris and the bride's sister, author Mary (Holbert) Ellyson.
. 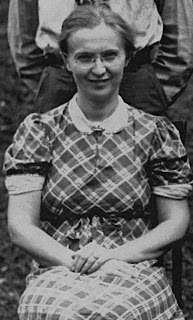 Della
The youngest daughter, Della taught school before she married at the age of 27. On June 9, 1935 she married Stanley Harris at Farmview, the Holbert farm on Clover Fork. Their wedding photo holds several memories. One of the memories is about flowers in the picture. Della’s older sister, Mary, who had done the planning for the wedding, suddenly realized that the flower arrangements had not been picked up. They had been prepared in Weston and shipped to Orlando. A flying trip to Orlando was necessary to get the flowers to the wedding on time. Ray Harris, brother of the groom and the gentleman at the left of the photo, taught botany and math at Shepherd College where I was one of his students in the early 1960’s. 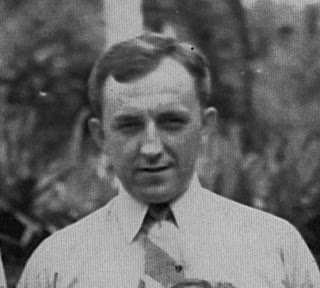 Robert Holbert, the youngest Holbert child, taught at Brier Point School and Roanoke School in Lewis County and also was the Assistant Superintendent of Schools in Lewis County. Later, Robert became a member of management with the Goodyear Tire Corporation in Akron and later in Lincoln, Nebraska. Robert married Lois Brown of Ireland, West Virginia, the daughter of Oren Dixon “Dick” and Angela (O’Dell) Brown. (Dick was a teacher and farmer in southern Collins Settlement District.)

Robert and Lois had four children: Allan, Louise, Angela and Fred. Like so many grandchildren of Orlando, now spread across the 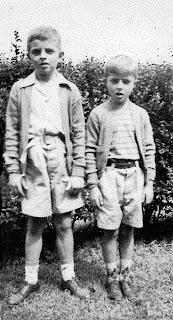 country, Fred remembers the summers he and his brother Allan spent at the Holbert farm on Clover Fork. As did all kids of that day, they delighted in roaming the hills of the Clover Fork valley. The boys never forgot Orlando, and it seems Orlando didn’t forget them either. In November of 1959 Jessie Bragg wrote in the Orlando column for the Braxton Democrat:

“Allan B. Holbert, son of Mr. and Mrs. Robert Holbert, a student at the Columbia University graduate school of journalism, wins a $1000 scholarship. Allan graduated from the University of Nebraska in 1956 and has been the managing editor of the Nebraska Education News. He is the grandson of the late Mr. and Mrs. A. B. Holbert of Orlando, Route 2.” 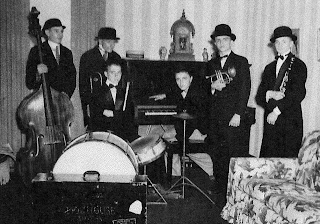 Left: The Doghouse Dozen Minus a Few, a band organized by Fred and Allan when they were in high school in the Lincoln, Nebraska in the early 1950’s. Allan would go on to become a journalist and jazz musician in Lincoln, Nebraska and his brother Fred would become a professor at the University of Nebraska.
. 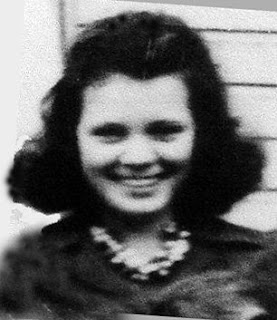 Nina Smarr, daughter of William Clarence and Dorothy (Harris) Smarr, became the foster daughter of Abia and Etta Cunningham as the result of the death of her father in a traffic accident in 1931. Nina graduated from Walkersville High School in 1942. She attended Glenville State College and became a teacher in the Lewis County Schools. Nina married Lawrence Craig and is the mother of two children from this union: Ronnie Craig and Dottie Starr. After the death of Lawrence and remaining a widow for a few years, Nina married Lydle Myers who is also now deceased."Nina, now retired, lives at Crawford, near Walkersville. This writer wishes to express his thanks to Nina, a great lover of history, for her help with this story.