The Horse Trading Center of the Universe 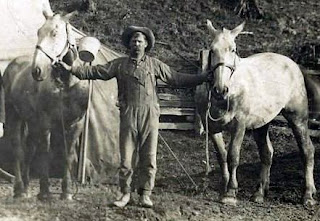 The Awakening
Early on Friday mornings, Orlando area farmers with strings of three or four horses descended on downtown Orlando. Large trucks, rare in that day, full of horses, pulled into Orlando and discharged their four footed cargo into the street in front of Mike Moran’s Warehouse Building. There was excitement in the air. 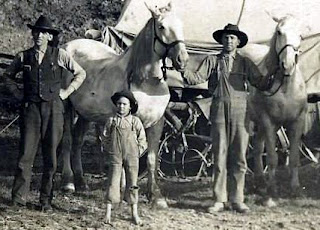 Young boys had eagerly awaited the event which had become a ritual for Orlando during the 1920’s and early 1930’s. News of the event had been spread by hand bills and by announcements in the Market Bulletin put out by the West Virginia Department of Agriculture.
.
Left above and right: detail from the photo of teamsters at the bottom
.
The Trading Begins
By noon, the streets of Orlando were full of horses, horse traders, watch and knife traders, and moonshiners. The elderly or out-of-work loafers occupied the benches on the porches of the stores owned by Charley Knight and Bill Conrad, and at the B & O Restaurant located in Moran’s Wholesale Building. These loafers had another subject of conversation to mull over as the horses snorted and pranced up and down the streets of Orlando. Indeed, it seemed that e 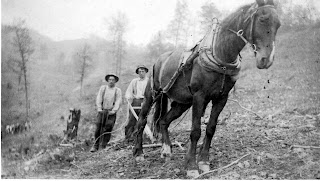 very horse in Braxton and Lewis County was present and horse manure was piling up as high as the lies that were being told by the traders of horse flesh.
Left: Plowing a hillside
Right: "Pid" Heline and horse
Left below: Veterinarian Ord Conrad
Dale Barnett, now aged 85, vividly remembers these horse trader reunions which occurred in 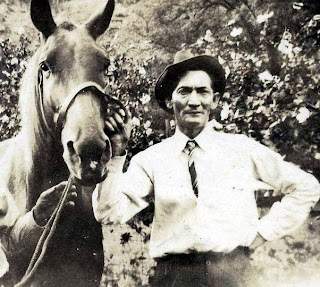 Orlando during his youth. Dale’s father, Bill Barnett, always had three or four horses he was willing to trade “for a little boot,” and Dale was wide-eyed and all ears as the bargaining and boasting was taking place. Clate Wiant, a noted trader of horses was always present, dressed in white shirt and tie, with a clutch of horses that he would be “willing to sacrifice” for the benefit of any person he was trading with. Farmers from Rocky Fork, Sand Fork, Indian Fork and Clover 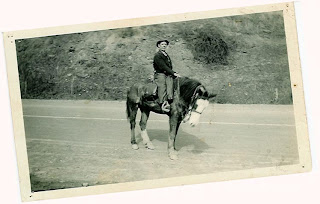 Fork tried their best to convince the farmers from Flesher’s Run, Knawl’s Creek and Riffle’s Run that their horses would do well on the latter’s feed. Tom Zinn who operated the large livery stable in Burnsville was always on the look-out for good team or riding horses and was usually present at the Orlando horse-traders reunion. Mr. Turner of the Bendale section of Weston, a horse trader of note, also made his appearance with a load of horses which he would usually sell, and would return to Bendale with another load which he bought.
.
Knife and Watch Traders
In addition to the ceaseless horse trading which occurred during the horse 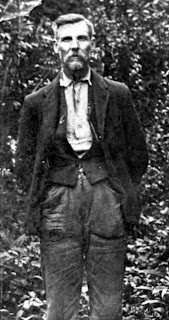 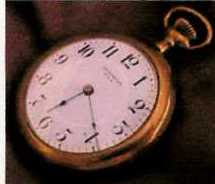 were also out in force. Lloyd “Tint” Henline was perhaps the supreme trader of knives in Orlando and always had a Boker Tree Brand knife, Case XX Stag Daddy Barlow, or a Holley pen knife for sale. Uncle Zeke reported that “Tint” made 26 trades on January 15th, 1925 and was fretting because he didn’t do better. According to Dale Barnett, watch traders could be spotted because they would conspicuously pull out their pocket watches to check the time every fifteen minutes in the hope someone was looking. Railroaders were notorious about their time pieces and were always striving to find the special watch that kept time to the second.
.
Left: Lloyd "Tint" Henline
Right: a pocket watch, likely a railroader's pocket watch.
Below: Examples of kinds of pocket knives that were traded.pocket knives

Not only were the streets full of farmers, horse traders, knife and watch traders, but the ubiquitous bootleggers were also fixtures at the horse traders reunions. Although Orlando was a lawless town and the nearest lawman of any jurisdiction was in Weston or Sutton, the bootleggers made their sales covertly under the Moran Wholesale Building or Lee Morrison’s poolroom. Uncle Zeke often railed about the illicit trade in John Barleycorn which took place during the horse traders reunions and about the rowdiness of the events in general. As to the quality of the horse flesh which was offered for sale, Uncle Zeke mused in his August 18, 1932 column that he was “glad that he was not as old as some of the horses that were present.” Uncle Zeke was 65 at the time. In his August 31, 1921 column Uncle Zeke showed his disdain for the horse traders reunion when he mentioned that “a peculiar looking person passed this way a few days ago. He was almost barefooted and naked. He had long hair and mis-shaven beard. I think he was president of the horse-traders reunion.” Remarking on one of his neighbors who became plastered in a moonshine bath at one of the reunions, Uncle Zeke reported that “we have become informed that a certain person known as Dan imbibed a little too freely in “happy juice” and caused no little excitement in his demonstration of manhood. We have also been informed that on his way to his place of abode, he somehow accidentally lost his pants, and that arriving at a late hour of the night, in order that he might not be discovered, he crawled into the henhouse and took up lodging in the rear of that structure. An investigation made by his brother –in-law found Dan disputing with the rooster as to who should become master of the coop, or the real cock of the walk. At this time it is claimed that he was able to cackle a little, but unable to crow.”
The Demand and the End
There was a big demand for horse flesh during the 1920’s and early 1930’s. The deplorable condition of the roads handicapped the horseless carriages which often were stuck in 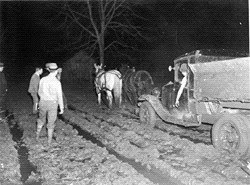 the mud on the roads to Burnsville or to Weston. Gas companies locating wells on the hills in the surrounding area were always in need of good teams of horses and teamsters made their way to Orlando to seek out the best matched teams. How the horse traders reunions adopted Orlando as the convention site is a mystery to present day citizens who are old enough to remember the events. However, the conventions lasted for many years before the automobile and paved roads gradually overtook the high stepping horse. While they lasted, the two-day horse traders reunions were a boon to the merchants and hotel keepers of Orlando, a time of trepidation for the wives of men who “went downtown to see horseflesh” and memorable events for all of the youngsters of Orlando.
. 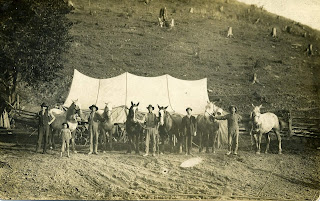 Note from David Parmer
Two significant players in the Orlando Horse Traders Reunion during the 1920’s and 1930’s were George Turner of Weston and Clayton Wiant of “above” Burnsville. Dale Barnett remembers George Turner as a large man, on the portly side, who was as good a trader as there was. A resident of Bendale, George was the son of Newton and Clarissa (Montgomery) Turner and the husband of Myrtle Turner. The only work George ever did during his lifetime was centered around farm stock. He died in 1944 at age 66 and was survived by his wife Myrtle and his daughter Clara Means.
Clate Wiant lived on the Little Kanawha River above Burnsville. He also was a stockman and farmer his entire life although he did serve as deputy assessor in Braxton County in 1949 and 1950. Clate was first married to Etta Singleton and secondly to Rosa Langford. Clate is also remembered for the white shirt and tie that he hardly ever was seen without. Clate died in 1974 at age 93. He was survived by his wife Rosa, his son Letch, also a noted stockman of “above” Burnsville, a son Vaughn of Walkersville, and a daughter Iva Lou Robinson of Pittsburgh. Clate was the son of Frank and Vesta (McHenry) Wiant.
A note of geography is in order when referring to a person living “above” Burnsville. The Little Kanawha flows basically from the east to the west through Burnsville. Rich farmland, now covered by the Burnsville Lake, flanked the river east of Burnsville. The farm families who lived in this area were known as living “above Burnsville,” or “up the river.” 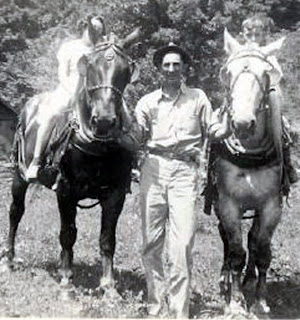 Comment by Tom Jeffries
My father, Coleman Jeffries, who was born in Orlando in 1905 and lived in Orlando all of his life, was a lover of horses and always had a horse or two until his final years. He of course would have been familiar with the horse traders reunions which took place in Orlando for many years. He felt that some unscrupulous horse traders foisted broken down horses on unsuspecting buyers and that after horses became obsolete these same traders went into used car dealing.
.
Also, when referring to people who lived “above Burnsville,” folks around Orlando referred to them as living “over on the river.” One of the horse traders who my father Coleman Jeffries frequently mentioned who would come to the horse traders reunions in Orlando was Buck Bacorn who lived over around Knawl.
.
Right: Coleman Jeffries with his young cousins June and Billy Nixon.
.
Comment by David Parmer
“Would he lie?” Uncle Zeke reported in his June17, 1926 column on the activities which took place during the recent horse traders reunion in Orlando. “Red” McCormick of Weston took the prize in the fox chasers’ lying contest, with Bud Hamilton a close second. Lon Riffle of Burnsville won the honors in the horse traders’ reunion and “Tint” Henline presided with great ability and skill at the knife traders’ convention. The next excitement will be a prize fight between George Riffle and Uncle Zeke’s scarecrow.”