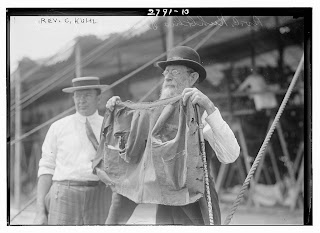 To the right is Christian Kuhl displaying his blood stained and bullet riddled CSA battle jacket at Gettysburg in 1913.

This picture of Christian Kuhl is preserved by the Library of Congress. The picture was located by a total stranger who saw the name in reverse on the glass plate and searched for Christian on the Internet. He found where I had published Christian’s Civil War memoirs written in 1911, he e-mailed a link to the image. My second cousin, Lila Powers, who is also a great grandchild of Christian, observed that this century-old image is so clear that you can see the individual hairs on Christian’s wrist. Readers are encouraged to pull up the original photo. 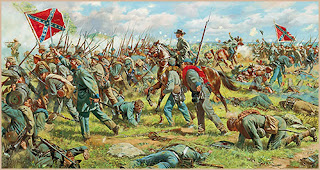 near the end of the Ken Burns documentary on the Civil War. Thanks to my youngest son James Christian Kuhl for locating this video.
.
Down the left side are scenes of four of the battles in which Christian took part:
top: Pickett's Charge, depicted by contemporary artist
Don Troiani
second: Battle of Petersburg
third: an aerial view of the Battle of Fort Stedman
bottom: Siltington Hill, where the Battle of McDowell took place, as it looks today.
.
In 1913, the State of Pennsylvania and the US Government sponsored the 50 year reunion of the Battle of Gettysburg which was fought in July 1863. 50,000 soldiers who fought on both sides attended. Christian’s unit served in Pickett’s Charge. The still picture and the video were both produced in 1913. The video continues with the 75th anniversary in 1938.

Christian was wearing this jacket on March 25, 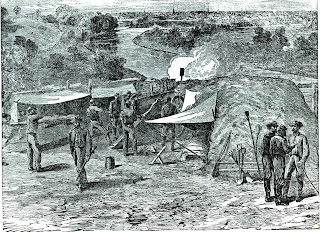 1865 during the Battle of Petersburg when he was shot and captured. According to records preserved by the National Archives and Records Administration (NARA), the US Army surgeon who treated Christian stated that Christian’s wounds consisted of “a mini ball entering at the head of the humorous and exiting near the first dorsal – a severe flesh wound”. Christian was taken to City Point, VA (now Hopewell) then placed aboard the hospital steamer the State of Maine for a trip down the James River and then up the Potomac River to Washington, D.C. where he was treated at Lincoln Army Hospital. He signed the Oath of Allegiance on June 10 and was released on June 14, 1865. The siege of Petersburg had degraded to trench warfare.
.


As acting company commander of Company D of the 31st Virginia Infantry Regiment CSA, “The Gilmer Rifles”, 24 year old First Sergeant Christian Kuhl had been ordered to take Fort Stedman. He led his men across three lines of entrenched federal troops and took the fort. When promised support did not arrive, he was attempting to lead his men back to CSA lines

when he was shot and captured. This was the last of his four wounds suffered during the war and the last of the 33 battles which he fought in the war.

A description of Christian’s wounds is also published in the regimental history series for the 31rst Virginia Infantry Regiment CSA. These books were published in Lynchburg, VA. A copy is available in the Biloxi, MS library.

Christian told his grandchildren about his wounds and wanted them to be sure that they understood that he was shot while he was charging and that he was not shot in the back while running away.
.
On May 31, 1861, 21-year old Christian and his 19-year old brother John went to Glenville where they enlisted under Methodist Minister John Elam Mitchell in the CSA. Did they know what they were getting into? Or were they just caught up in the moment and perhaps just getting away from home? Both paid dearly for this decision.
.
Christian's younger brother John, serving in the same CSA company, was mortally wounded at the Battle of McDowell on May 8, 1862. His 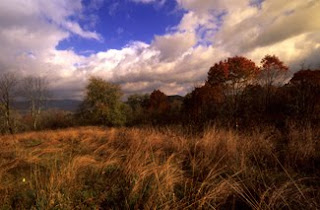 father Henry Kuhl was hung by the Yankees on May 9, 1862. Two brothers, William and Henry, served the Union during the Civil War. Christian told his oldest daughter that he lost his father, a brother and everything he owned during the war. After the war, Christian and his brother Conrad, with others, built the Methodist Church, Jobs Temple using hand hewn logs. This church is on the National Register of Historic Buildings, is still in use and is located near the intersection of Job Run and the Little Kanawha River 9.5 miles west of Glenville, WV on Route 5.

According to his family Bible and family tradition, Christian was born October 19, 1839 in Baltimore, MD a few weeks after his family arrived from Prussia (now Germany).
There is some question about when the family arrived and from where with different information being stated by different researchers.

After the war, Christian was licensed to preach and was ordained in the Methodist Church. He also farmed and sold books to earn a living. He and his wife Emsey (Heater) Kuhl had six children, five of whom lived to adulthood and three of whom have living descendants.

According to the family Bible, Christian died October 25, 1918 at age 79, in Burnsville, WV from the Spanish flu. He and his wife Emsey (Heater) Kuhl are buried in the K of P Cemetery in Burnsville.

One grandson was killed in WW II. A grandson of his brother Conrad and a son of his half-brother George were also killed in WW II. Their names are all immortalized on the Veterans Memorial in Charleston, WV.
.
Kuhl Family History on Line
Many other relatives fought in WW II and subsequent wars. One of our goals as a family is to ensure that each of our war heroes is honored with a biography on the West Virginia Veterans' Memorial site.

The Kuhl Family Today
We are also collecting e-mail addresses for a free family newsletter by e-mail. The newsletter will be distributed using the bcc feature to protect your address from spam.

The Kuhl family has held an annual reunion in Glenville, WV in August every year since 1938 with the exception of two war years when gasoline was rationed.

Christian’s CSA jacket was donated to Beauvoir, a CSA museum in Biloxi, MS and the last home of Christian Kuhl’s old commander in chief, Jefferson Davis. Unfortunately, Hurricane Katrina did extensive damage to Beauvoir and the jacket has not been located. After Katrina, 2500 artifacts were taken to Jackson, MS for preservation. However, the jacket is still missing.

If you have questions about the Kuhl family, contact me:
Dave Kuhl210 Glen Eagles Drive
Ocean Springs, MS 39564-9041
e-mail: dbkuhl@bellsouth.net