John Elam Mitchell was the preacher who, in the 1850s, led the Skinners, Poseys, McPhersons and Riffles to establish the Methodist Protestant Society that would become The Mt. Zion Methodist Protestant Church of Orlando. In addition to the years he spent in Braxton County the preacher served throughout what would become central West Virginia. The Reverend Captain John Elam Mitchell was killed in guerrilla warfare at Arnoldsburg the age of 44.
Below are three looks at this fascinating fellow:
~ as a man of God,
~ as a CSA Partisan,
~ as an ancestor of Oil Creek's community.
.
John Elam Mitchell's Ministry

John Elam Mitchell was the grandson of Rev. John William Mitchell (1763-1840) who, with David Smith, was the clergy involved in the establishment of Harmony Methodist Protestant Church in Jane Lew in 1829. John Elam’s father Abner Mitchell1 (1789-1840) was also a preacher in the Methodist Protestant Church in (what would soon become) central West Virginia.
.
John Elam Mitchell began his career as a preacher in the Wet Virginia Conference of the Methodist Protestant Church in 1854, at the age of 36. He was assigned the Braxton County Circuit from the summer of 1854to the summer of 1856. He spent three years in other West Virginia Circuits and in 1860 he was assigned to the Gilmer County Circuit.
.
John Davison Sutton, the author of History of Braxton County and Central West Virgina, published in 1919, considered John Elam Mitchell to be his mentor. On pages 236 through 237 Sutton writes the following:
.
“In the fall of 1858. . . I rounded into Barbour County, to the parsonage where resided my old pastor and counselor, the Reverend John Elam Mitchell. He was delighted to welcome me and called a Quarterly Conference at which I was employed to assist him on his large circuit which lay along the western base of the Allegheny Mountains, embracing Barbour County east of the Tygart’s Valley, including the towns and villages of Beelington, Meadowville, Philippi, Goardtown and Nicholas. Crossing the Laurel Hill on to the Cheat River near the town of St. George- then county seat of Tucker County- cutting through the center of said county to the state line between Virginia and Maryland, thence to the town of West Union in Preston County, thence to Rowlesburg. From there back across Laurel Hill via Fellersville and Evansville on the N.W. Turnpike road and then to the parsonage, a round of two hundred miles, embracing between twenty and thirty appointments. The latter part of the year, now into the summer of 1859, I

spent in Barbour Counties pursuing my studies along theological lines as well. Removing in the fall I attended school in Taylor County and to some extent assisted the pastor on the Taylor Circuit who was no other than my old clerical sire, J. E. Mitchell, assigned to that charge at the recent session of Conference.
.
To the left are William and Rulina (West) Osburn of Gilmer County who were married by the Reverend John Elam Mitchell two months before the Gilmer Rifles marched off to war.
.
.
John Elam Mitchell Goes to War

The accounts of Captain Mitchell's service vary more in the attitude of the writer than in facts.

According to Christian Kuhl's Memoirs, ". . . in May 1861, at a general meeting in the town of Glenville, Gilmer County, West Virginia and then Virginia, I volunteer with many of the Democrats from Said County and we organized a Company of Infantry called the "Virginia Volunteer Infantry". This Company elected Rev. John Klem (sic) Mitchel as their Captain, who was killed soon after in a skirmish near Arnoldsburg, Virginia. Said Mitchel a brave, gallant officer fell while leading his men in battle." Sargent Kuhl also gives us the only quotation we have so far: "After dinner I helped Captain grind his little Spear at Yancey's grindstone and the Captain remarked--'Now if we meet the enemy I shall endeavor to make my mark.'"

According to the notes of Roy Bird Cook,2
“Mitchell was serving [as the preacher for the Methodist Protestant Church's] Gilmer County Circuit in the spring of 1861 and recruited a company for service in the Confederate States Army. This company was known as the Gilmer Rifles, later Company D, 31st Virginia Infantry. Company was organized on May 31, 1861; marched from Glennville to Huttonsville3 and then back to Laurel Hill, a distance of 105 miles. Participated in the engagement at Laurel Hill on June 9 and 10, 1861; on retreat from the engagement lost three sergeants, one corporal and twenty-five privates by desertion. Mitchell resigned as Captain on June 20, 1861; company was regularly mustered into the Confederate service on June 20, 1861, by Major Francis M. Boykin, Jr.

“Upon turning his back to the regular service, Mitchell

returned to Gilmer county and allied himself with the Partisan Rangers or bushwhackers. It is claimed that he held a captaincy in this piratical service, but it is more likely that he free-lanced and held a titular rank by reason of his former connection with the Gilmer Rifles, whom he drilled clad in ministerial frock coat and stove-pipe hat. His co-workers in the moral vineyard were such exemplars of piety and patriotism as Perry Conley, Dan Duskey, George Downs, William Harris, Sprigg and the Tunings.
.
To the left is Major George Downs, the commanding officer of the Partisan Rangers with whom John Elam served.

“The Partisan Rangers comprising several bands, all under the general command of Captain

George Downs, moved across central West Virginia from Webster County (see diary of Captain William Harris.) The march began on April 23, 1862. They attacked Arnoldsburg at early dawn May 6th, which was then being held by Major Trimble and Companies A, B, and C, were driven off, with some loss. Joe Burson was instantly killed; Rev. John Elam Mitchell was shot through both hips, captured and died in the hands of the Federals, perhaps the day following the fight.. . .

“W.D. Rollyson, member of the legislature for Braxton County, reported the affair to the Wheeling Intelligencer, said that four were killed and nine wounded, including “Rev. J. E. Mitchell, a minister of the M.P. Church. Mitchell has been in the guerrilla business since last spring.” Charles Hooton of Barbour County was a Methodist Protestant and at once took steps to protect the good name of his church. In a letter to the Intelligencer of May 15, 1862, he says, “At the last Conference of the M.P. Church information was received that Mitchell had joined the Southern army; Conference unanimously refused to assign him a church.”

According to Ron Brothers and Connie Ball, family tradition among John Elam's descendents through son Melville, who moved to Texas, claims John Elam served as a chaplain with the Confederates and also tells us John Elam is buried under a church.

Cemeteries In Calhoun County, W. Va confirms his burial:
"Arnoldsburg Cemetery: Behind and under the Arnoldsburg Methodist Church. Elim Mitchell, Methodist Minister, CSA soldier, killed at Arnoldsburg. Several graves, one of which was the Union Soldier killed in the Arnoldsburg skirmish, believed to be a Smith."

At the time of his death John and wife Prudence (McCally/McCaully) had seven children, six boys and a little girl. Wesley was 19, Melville not yet 17, Ira 15, Henderson 14, Cyrus 11, Alonzo 9 and Samantha Jane, 5 years old.

Their four oldest sons served the CSA. in addition to Ira and Henderson, there was

Wesley who died in a hospital at Peterburg. Melville's story follows.

Melville Mitchell is pictured to the left. He was described as being "5 feet 6 inches tall, with dark complexion, dark hair, and hazel eyes."

The fourth son, Melville, has been well documented by his Texas descendants, Ron Brothers and Connie Ball. They tell us that Melville was "a private in (2nd) Co. G, 62 Virginia Mounted Infantry and was captured by the enemy in Highland Co., VA. 12 Dec 1863. He was taken to Camp Chase, Ohio, but was transferred 14 Mar 1864 to Ft. Delaware, Del. He took an oath of allegiance and was released on 20 Jun 1865. At the time Melville enlisted, he was a resident of Braxton County, VA. Melville was first married to Mary Ann Bull on 27 Dec 1866 in Lewis Co. They had 4 children." Sleuthing the 1880 census, Brothers 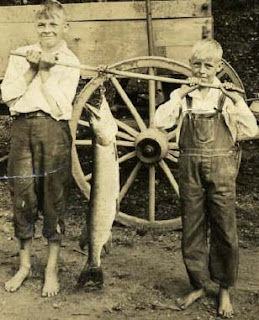 and Ball provide evidence that by then Melville's first wife had died and the children were adopted out. In 1880 Melville was in Greenup Co., KY. living with the David Pendleton family. It was in Greenup Co. that Melville married Henrietta A. Horner on 26 Jun 1880. Melville and Henrietta moved to Texas about 1884.

John Elam and Prudence's four youngest children, Henderson, Cyrus, Alonzo and Samantha Jane, lived in the area that would soon become Orlando. Early on, Henderson had bought land from Ann Skinner to build a general store, but then, inexplicably, sold it. We don't yet know the rest of his story. The store eventually became Oldacker's Mercantile and later Charlie Knight's General Store. Cyrus, Alonzo and Samantha Jane lived and raised their families in Confluence/Orlando. Some of their Orlando offspring at pictured below, to the right.

To the right are some of John Elam and Prudence's Oil Creek descendants.
From

the top,
Homer and Stanley Mitchell, grandsons of Alonzo and Samantha Jane (Riffle) Mitchell, with fish they caught in Oil Creek
Luther Monroe Mitchell, grandson of Cyrus and Nancy (Riffle) Mitchell, with his bride Virginia McCord of Peterson's Siding.
Civilla Riffle, daughter of Martin B. and Samantha Jane (Mitchell) Riffle, with her husband Lee Blake, Lumberman & Genealogist They lived up Clover Fork and started the Riffle-Blake Reunions.

Most of Cook's information is from Boyd B. Stutler's West Virginia in the Civil War, Education Foundation, Inc., Charleston, West Virginia 25324.

3. On the way from Glenville to Huttonville the Gilmer Rifles stopped at the Yancy place at the mouth of Oil Creek. Christian Kuhl tells us about it in A Bountiful Repast At Old Col. Yancey's. Christian Kuhl was uncle to the Coles who lived up Three Lick. For the story of how the Coles came from the Kuhls, see another Civil War story, A Family Torn by the Civil War.
.
. . . . . . .
Comments
comment 1: Donna Gloff 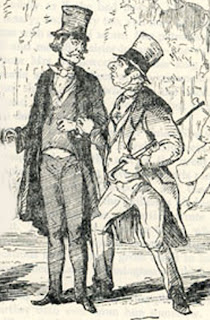