The 5th annual Orlando Community Reunion will be held on
Saturday, September 3rd, 2011
beginning at 10:00 a.m.
The reunion will be held in the same location as last year,
in the large field beyond the Post Office on Cemetery Road.
Plenty of Parking!
Their will also be signs posted.
This is a covered dish affair.
So please bring a lawn chair, your beverage of choice, a covered dish
and lots of memories of the “good ole’ days”.
Once again we will hold the “ penny a vote” King and Queen challenge. 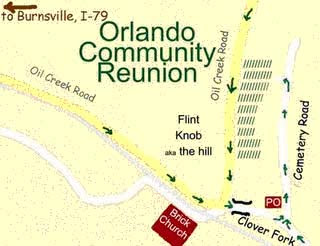 Your candidates this year will be…For Queen, Betty Mitchell and Sue Wymer Posey. The King candidates are Darrell Skinner and Bob Mitchell. If you cannot attend the reunion and wish to cast your “ penny a vote”, contact those individuals directly. There will be voting cans at the registration table the day of the reunion and you may vote there as well. 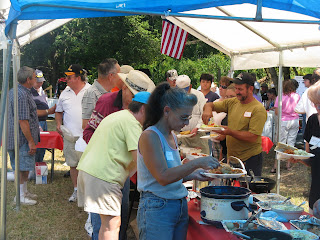 Let us once again show these folks our support and help to make this a special day for them. All votes must
be turned in by 1:30 p.m. to allow ample time to tally the results. The crowning will take place @ approximately 2:30. The 2010 King and Queen, Bill Beckner and Ethel Doyle will crown the 2011 King and Queen. Winners for the Chinese Auction will be drawn following the crowning of the 2011 King and Queen.
Entertainment for this year’s reunion will be provided by “ Old Glory”. This group consists of Larry Gay, Donald Gay and Eugene Blake. All of these gentlemen have ties to Orlando and we are confident that they will receive a “ down home welcome”. They play a variety of music such as, the 50’s, country and gospel. 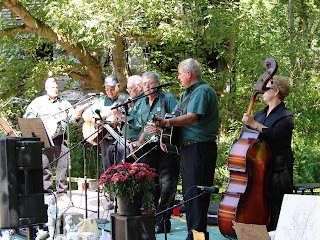 There will be door prize drawings throughout the day, so please remember to sign in at the registration table in order to be included in the drawings. There will be games such as corn hole and horseshoes available, etc. under the direction of Nycole Wymer.
The Orlando Reunion Committee will also be selling our cookbooks we printed last year. If your recipe was not included, it was merely because we did not receive it in time. All proceeds from the sale of cookbooks, King/Queen
, Chinese Auction will benefit the 2012 reunion. We want to once again, take this opportunity to say thank you to all attendees and their families for helping to make all the previous reunions so successful. We could not accomplish this without
your attendance and continued support. So thank you again and we are looking forward to seeing
you there.
There will be no alcohol or drugs permitted at this event. 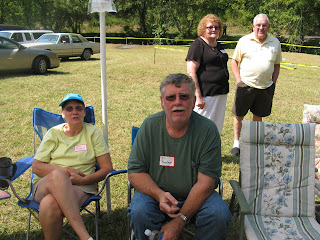