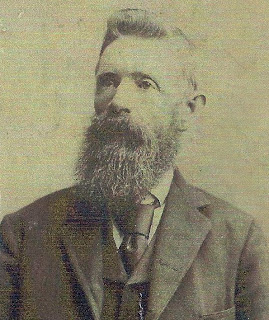 He was 79 years and 6 days of age at the time of his death, and his going was that of peace and ease. “The hoary head is a crown of glory if it be found in the way of righteousness.” Prov. 16: 31. Thou shalt rise up before the hoary head and honor the face of the old man, and fear thy God: I am the Lord.” Lev. 19: 32.
Left: Christian Kuhl
Right: Emsey Heater

He was united in marriage to Emsey E. Heater October 28, 1866. To this union were born six children, two boys and four 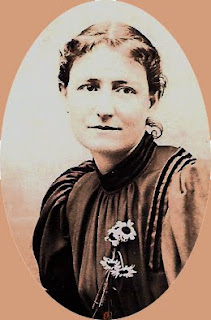 girls. The youngest girl (Martha R.) preceded him to the Spirit Land January 5, 1879, at the age of six years. He leaves to mourn their loss a loving, devoted wife, five children, eight grandchildren, two brothers, one sister, two half sisters and one half brother, and many friends and acquaintances who have loved and revered him for many years. Their children are: Mrs. Cornelia N. Brooks, of Burnsville, W. Va.; Mrs. Addie Nicholson, of Hettie, W. Va.; Mrs. Rosa H. Benecke, of Titusville, Fla.; Luther J. Kuhl, of Frametown, W. Va.; and Robert F. Kuhl, of Clarksburg, W. Va.

He was a man of strong convictions and would stand up for what he thought was right, and would endure all kinds of hardships for its furtherance. He was true to the principles of his convictions. He was a Confederate soldier during the late civil war, having enlisted at Glenville, W. Va. In Company D, Thirty-first Regiment, Virginia Volunteers, under Captain John E. Mitchell, on May 31, 1861, and served the cause for which he fought faithfully, bravely and heroically. He was four times wounded, the last time seriously, on March 25, 1865, in the charge of Ft. Steadman, having been shot in the rig 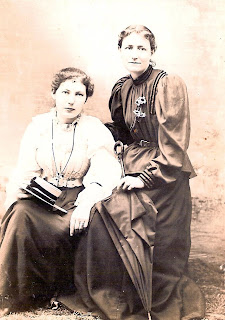 ht shoulder. He was then captured and sent to Lincoln hospital in Washington City, and was there when Lee surrendered, and did not get home until June 1, 1865. He was distinguished in service, having been promoted to the rank of orderly sergeant for meritorious conduct. He was always at his post of duty, was never absent without leave, and was never punished for any offense during the entire war.

Brother Kuhl was converted to the religion of Jesus Christ when about 21 years of age and joined the M. F. Church, South, in 1866. He was a very active church worker. He was licensed to exhort in 1866, was licensed a local preacher in 1888; and was ordained a local deacon September 18, 1892, by Bishop J. C. Keener at Clarksburg, Va. He preached 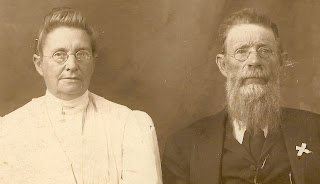 until November 16, 1901, eighty-one sermons. He always helped to support the Gospel and helped his pastors with their revivals. He administered the ordinance of baptism to quite a number of persons, both children and adults, and filled the place of class leader, Sunday-school superintendent, etc., and also married quite a number of couples.
Above, left: Emsey with daughter Cornelia
Above, right: Christian and Emsey (Heater) Kuhl
Below, left: Christian Kuhl’s Family
. . . Front row (L-R): Christian Kuhl, Emsey Ellen Heater Kuhl, Hezekiah Stout, and Rebecca Kuhl Stout.
. . . Second row (L-R): Luther J. Kuhl, Robert F. Kuhl, Rosa H. Kuhl, Lewis Brooks.
. . . Third row (L-R): Elisha A Nicholson, Laura Addie Kuhl Nicholson, Cornelia Kuhl Brooks.
Photo is from Dave Kuhl’s Collection.
He was a farmer by occupation, but had bookse 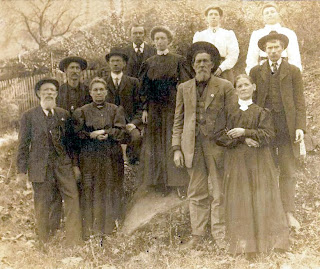 lling and colportage as side lines. He would raise his yearly crop, then he would go out and sell books of various kinds. He was colporteur for the American Tract Society and sold $1,116.86 worth of books and distributed $161.18 free. He also supplied many destitute families with cheap Bibles and Testaments from the American Bible Society.

Brother Kuhl was very earnest in his home religion. Shortly after he was married he and his faithful companion set up their family altar and continued it as long as they kept house to themselves. Night and morning would they have prayer, and they led all of their children to be professors of religion, and when the parents were away from home, the children would each take their turn conducting the family worship.

Brother Kuhl marked hymn No. 605 in his church hymnal, saying the words fit him, dated June 5, 1910:
We may say of him:
“Servant of God, well done!
Thy glorious warfare’s past;
The battle’s fought, the race is won,
And thou art crowned at last.”
“Nobly thy course is run,
Splendor is round it.
Bravely thy fight is won,
Victory crowned it.”
“In thy warfare of heaven,
Grown old and hoary,
Thou’rt like the summer sun
Shrouded in glory.”
“I cannot say, and will not say,
That he is dead; he is just away!
With a cheery smile, and a wave of the hand,
He has wandered into an unknown land.
Think of him faring on, as dear
In the love of there as the love of here.”
The above was taken from an obituary written and read at the funeral service of the deceased in the home of his daughter by his pastor, Rev. U. S. G. Allen.
We wish you to publish the above in the Braxton Democrat.
Mrs. Emsey E. Kuhl