Orlando of the Lakes 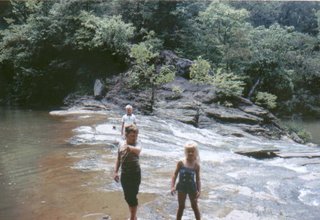 In the late summer when I visited as a kid, Oil Creek didn't have enough water to swim in. Even when it had rained the water, clean as it may have been, always remained the same color as the earth on its banks and not very appealing. The little brooks running out of the hollers were sparking clear, but they were just wading deep- okay only for chasing crawfish and minnows or washing the car. We did have Falls Mill. As I recall, it was a pretty long trip on the mid-20th century roads, but as the photo to the left shows, it was a wonderful place to spend the day.

When the Army Corps of Engineers remodeled central WV in the 1970s and '80s they dammed the Little Kanawha River just before it reaches Burnsville (the Burnsville Dam) and the West Fork River before it reached Weston (Stonewall Jackson Dam) and created huge breath-taking lakes & wilderness.

This is how West Virginia Tourism sees this area, Lewis, Braxton, Upshur, Gilmer counties:
"In a place where tradition is a part of everyday life, the past can seem remarkably vivid. It's especially true in two Mountain Lakes locations where the 19th century lingers in the landscape and in local memory. Both are on the Civil War Discovery Trail.

"The Mountain Lakes call you with a soft voice. For flatwater fishing, sailing and motor boating. For canoe trips along the meandering Elk and Little Kanawha rivers. For trout fishing in crashing spring torrents. For world-class whitewater.

"This is the rural heartland of West Virginia, where traditions are sheltered and celebrated in dozens of community festivals all year long. The center of the Mountain State is one of West Virginia's most abundant wildlife regions Hunters will find white-tailed deer, wild turkey, waterfowl and small game, as well as expanding black bear population.

"The county seats of the region still have slow-paced, old-timey business districts where antique stores and specialty shops await your discovery. As you drive the region's country roads, you'll find nooks and hollows full of homegrown herbs and wines, crafts and yesterday's treasures. West Virginia's most famous product, glass, is also available. Masterpiece Crystal in Jane Lew is a working glass factory, and both Weston and Jane Lew have glass specialty stores and outlets."