Orlando Train Wreck in the 1920s 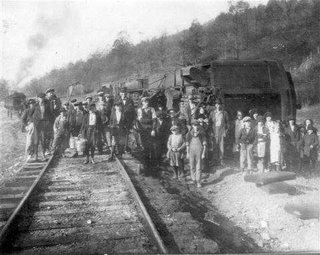 From David Parmer:
"In the early 1920s there were several passenger trains which traveled the B&O line through Orlando and Burnsville. Apparently this was an early morning train because several of the passengers were children from Orlando who were traveling by the train to Burnsville for schooling.

"I obtained this photo from Lynn Riffle of Jane Lew. He was a passenger on the train along with his brother Tut. They were the sons of Ebert and [Tina Mae (Scarff)] Riffle. Ebert was the son of John Scott Riffle and Mary Ann Skinner Riffle. Lynn and Tut are the two boys holding lunch boxes in the foreground of the photo. Their parents are to the right in front of the overturned car.

"Lynn advised me that some of Joe Riffle's children were also on the train. Polar Henline, son of Beham and Semantha Skinner Henline, is one of the people on the left side of the photo.

"It is my understanding that there were no serious injuries to the passengers."