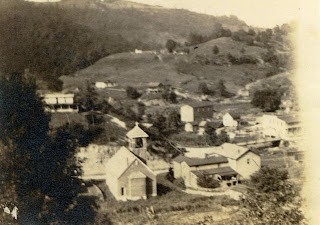 From David Parmer:
"This is Orlando as it was seen about 1920 from Henline Hill looking toward the Catholic Church. The structure beside the church I believe was the Rush Hotel. I'm not quite sure about that. At any rate my father-in-law Coleman Jeffries bought that lot and buildings, tore the buildings down in the early 1950s and used some of the lumber to build his house on Oil Creek. There was also a mantel piece from the old hotel building which was used in my in-laws' house.

"The Charlie Knight Store is the large building in the right center of the photo although he was a later owner of the store.

"The Skinner cemetery is in the top center of the photo. Note the cleared fields at the top of the large hill. Heater Henline told me that crops of wheat and other grains were grown at the top of that hill. When it was harvested and put into small shocks it would be taken off the hill by a system of wires on which the shocks would be hung and the shocks would slide down the wire to the bottom of the hill. Also note the large tree in the cemetery. I'm sure that is the large oak tree still standing in the middle of the cemetery. And note the cemetery has not expanded toward the top of the hill as it is now."