.
by David Parmer with Ed Riffle
A Visit to Road Run
“Early on Saturday morning, my father would load up the old Ford, and with my father, Jack Riffle and my mother, Bernice (Knapp) Riffle, in the front seat and my sister Donnie and me in the rear seat, off we would go south on U. S. 19 from Clarksburg for an exciting visit to Orlando.”

“My father’s sister, Josie Beckner, or "Jose", as my father called her, lived with her husband, Bill Beckner, in a farm house near the mouth of Road Run. They were always welcoming and friendly, and Aunt Jose made biscuits every day.” Hot biscuits with country butter and jelly always finds a warm reception from a young boy, and Ed was no exception.

Ed Riffle was born in 1937 in Clarksburg. His father, Jackson Riffle, was employed at the

Hazel Atlas Glass Plant. After a week of enduring hot furnaces full of molten glass and the clang of machinery making the pressed Depression glassware for which Hazel Atlas was famous, a time for leisure and quiet on Oil Creek rejuvenated the soul and settled the nerves. A visit to Uncle Bill’s and Aunt Jose’s was just the therapeutic dose of tonic needed by glass worker Jack. It also provided an opportunity for son Ed and Beckner cousin, Louie Mae, to scout for darting minnows and menacing crawdads in Oil Creek and roam the hills of the Oil Creek valley. Childhood memories are not forgotten, even with the passage of over a half century. Ed Riffle remembers well the visits by his family to the home of Bill and Josie Beckner.

Examples of Hazel-Atlas Depression Glass. Hazel-Atlas also made Atlas canning jars and a wide variety of every-day ware that is highly collectible today.

The first bit of excitement on a visit to the Beckner home on Oil Creek was the thrill of traveling up and over Ryan’s Hill on Goosepen. The days of modern brakes were still well into the future and war-time shortages of auto parts made the Goosepen Hill into quite an adventure in 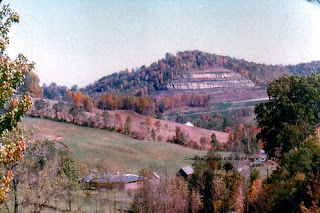 an aging Ford. To get to the bottom of the hill and the gentler terrain of Three Lick always seemed quite an accomplishment and was the signal that the Beckner home was not far away. And there might also be a visit with Aunt Della Wymer’s family on Three Lick and with cousins Sonny and Sue. To Eddie Riffle, these visits during his youth were memorable.

The Beckner Home on Road Run
At the mouth of Road Run on Oil Creek, on the south bank and at the base of a large hill, sets the original home of John Fountain Posey. John Fountain, the son of Alfred F. Posey and Christina Murphy Posey, died in 1934, and the home fell into heirship and was rented out. Bill and Josie Beckner 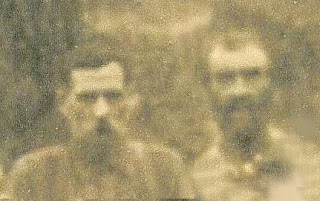 were the tenants for several years. Ed Riffle recalls his many visits to the Road Run home of his uncle and aunt. “When we visited, my father had to drive through Oil Creek to get to the house. When it was flooding, we had to park and walk across the railroad bridge.”
“There was no electricity or natural gas in Uncle Bill and Aunt Josie’s home. There was a fireplace in one room and a wood-burning stove in the kitchen. In the evening after the sun went down, everyone sat around an oil lamp in the dining/sitting room and talked until it was time for bed. When bed-time came, I went upstairs which was very dark to go to 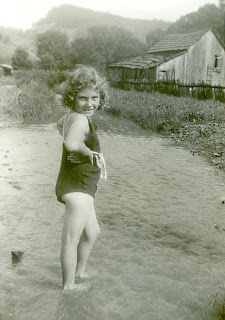 bed. One morning, Aunt Josie surprised me by frying a duck egg to go with hot biscuits for my breakfast.” Since there was no running water in the home, Ed recalls that drinking water was cranked from an open well in the back yard. “Aunt Josie was a good cook and before every meal, Uncle Bill returned thanks.”

Upper left: John Fountain Posey, the first owner of the Beckner home on Clover Fork at Road Run, is on the left and Josie's grandfather Stewart L. is on the Right in this detail from a photo of the funeral of Beham Henline in 1912.
Left: Louie Mae Beckner, in Oil Creek.
Right: The Beckners: Rosemary, Marvin, Bill, Ruby and Josephine holding child. Lambert and Louie May are in front of Ruby.

Bill and Josie Beckner lived in the Posey house at the mouth of Road Run until around the end of World War II when they moved to a house on Flint Bluff in Orlando. After Bill and Josie moved out of the Road Run home, Josie’s father, Charles Riffle, moved into this house and lived there a while before finally moving to the Three Lick farm owned by his son, Brownie Riffle, where he died in 1949. 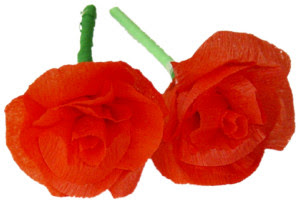 Decoration Day
When they lived in Clarksburg Ed's family trekked to Orlando every Decoration Day. (We call it Memorial Day now.) In the mid-1900’s, the roads from Ohio, Michigan, Maryland and many other states were full of vehicles headed to West Virginia cemeteries during the latter days of May. “We always went to the cemetery at Orlando and the Posey Run cemetery. Aunt Jose had made the small red artificial flowers with green stems to be used for decorating the graves of family and friends. The flowers that she made looked just like the flowers in the story on the Orlando web page.” The Decoration Day journey to Orlando was like an 11th Commandment to family-reverent West Virginia-born factory workers from Akron, Canton, Detroit, Pittsburgh, Baltimore and further.

The Bill Beckner home on Flint Knob was a big change from the home on Road Run. Not quite urban, living in Orlando was quite a bit different from the Road Run farm since it had electricity. However, that 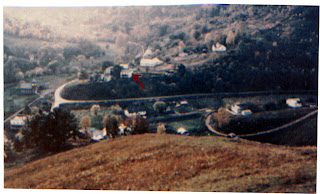 the Beckners were still in the country was evidenced by an outhouse and lack of running water. The home of the late Ollie Blake, this large two story house had front and back inside staircases with nice banisters, large rooms and high ceilings, according to Millie McNemar. She was a playmate of the daughter of Mr. and Mrs. Bill Byrne, both of whom taught school in the Orlando area, and were previous tenants of the house. Millie recalls the beautiful views that were available from the porch.

Ed Riffle continued to enjoy and look forward to his visits with Uncle Bill and Aunt Josie who now had a panoramic view of the town of Orlando. Ed’s last visit to the Flint Bluff home was in 1972, just prior to the deaths of Bill and Josie. Not long after his visit, he was at a church camp in Ohio when he received word of his Uncle Bill’s death and drove from Ohio and back on the same day for the funeral in the brick church. (When the Methodist Church and the United Brethren denomination merged into the United Methodist Church, Orlando's two congregations were merged into one congregation, and that congregation took over the vacant brick building that had housed St. Michael's Roman Catholic congregtion.)

Time to Reflect
Now at home and retired in Glasgow, Kentucky, Ed Riffle enjoys the memories of his visits to Orlando. His parents, Jack and Bernice Knapp Riffle, now are deceased, as are his Uncle Bill and Aunt Josie. It has been over thirty five years since his last visit to Orlando but the happy memories are still with him. Recently, Ed was elated to learn from his sister in Texas that Orlando reminiscences could be accessed through the web pages of Orlando Stone Soup. His sister happened to be a fellow church-goer with a friend whose husband, Bob Pumphrey, grew up on Goosepen and is an avid reader of the Orlando stories. It is indeed a small world.